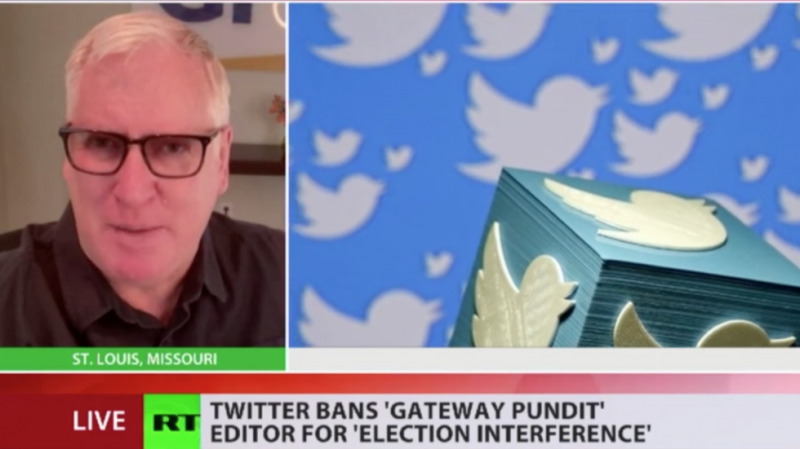 The @gatewaypundit Twitter handle belonging to Hoft, which sported over 375,000 followers, was banned on Saturday night for “repeated violations” of Twitter’s “civic integrity process,” which focuses heavily on information or theories that “could undermine faith in the process itself, such as unverified information about election rigging, ballot tampering, vote tallying, or certification of election results.”

Gateway Pundit, a right-wing website that is a frequent target of liberal critics, has recently been pushing an investigative piece which it claims supports theories of election fraud in Michigan. A video teased and later released by the site shows a white van delivering boxes in the middle of the night to the TCF Center in Detroit, Michigan. Hoft claims sources and several witnesses who have signed affidavits say this van was full of “61 boxes of ballots” and returned an hour later on election night with more “suspect ballots.”

“We have the proof here,” Hoft told RT about his video and election fraud claims.

Officials have said no late-night ballots were counted that were processed after the 8pm deadline.

The argument is that any ballots delivered late Tuesday night or early on Wednesday were already processed and met the deadline, as there was no deadline for delivery.

Hoft has chalked up local authorities not being interested in his reporting to them being “on the other team.”

He also questioned social media platforms working so hard to ban discussion around election fraud, saying those who argue the election was “secure” work the hardest to suppress dissenting opinions.

“If they’re so secure with their position, why are they cracking down and eliminating sites like myself from the social media platforms?” Hoft said. “It doesn’t make sense, and this is what we’ve fought against for several months now.”

The journalist also pushed back against Twitter’s “ethic policy,” which effectively bans any questioning of the 2020 election but does not do the same for other elections, including Donald Trump’s victory in 2016.

“You cannot challenge anything about the 2020 election, and yet there are still individuals who are challenging the 2016 election. That’s still allowed on Twitter,” Hoft said.