Home / WORLD / Gang kidnappings, earthquakes, assassinations and mass border crossings – what the heck is going on in Haiti?

Gang kidnappings, earthquakes, assassinations and mass border crossings – what the heck is going on in Haiti? 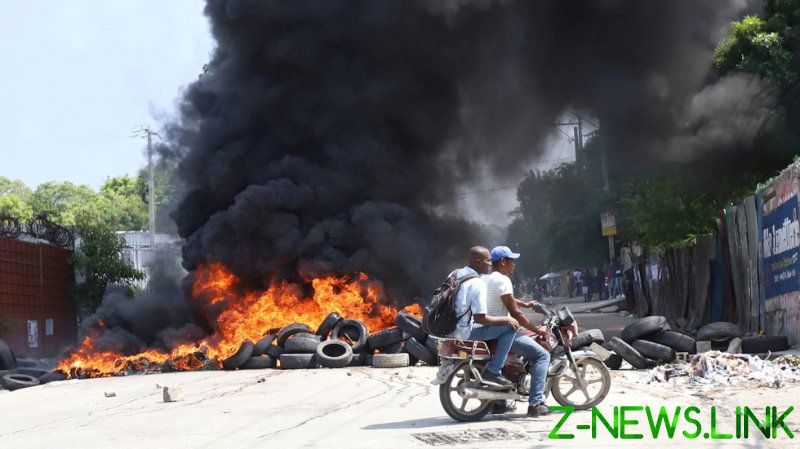 Journalism is a funny old game. One minute you’re lunching with a war criminal in a maximum-security jail cell, the next you’re getting high from secondary crack smoke in a trap house, and then you’re drinking mint tea with the only man to have pulled off an Islamic coup in the West.

Having worked on Sierra Leone’s war-crimes tribunal, reported on British organised crime groups and interviewed Yasin Abu Bakr, the leader of Jamaat al Muslimeen, who died on Friday and is best known for staging a coup d’état in Trinidad in 1990, it’s remarkable how many gangbangers, revolutionaries and terrorists I’ve come across over the years who have an acute grasp of geopolitics and very similar axes to grind. Likewise, there’s no shortage of charismatic leaders coming up through the ranks – anywhere in the world – who are ready to recruit a growing army of boy soldiers and junior jihadis looking for a father figure, a pair of trainers or just some cash for food or dope.

Take Haiti’s Wilson Joseph, for example. As leader of the 400 Mawozo gang (or the ‘400 simpletons’, for non-Creole speakers) having just kidnapped 16 American missionaries and a Canadian at gunpoint in the capital, Port-au-Prince, the sharp-suited, slick-talking gangster took to YouTube to threaten to kill his hostages one by one if his $1 million per-head ransom demand went unpaid.

“I swear by thunder that if I don’t get what I’m asking for, I will put a bullet in the heads of these Americans,” Joseph says on camera, surrounded by a mob of gang members. Among the hostages from the Ohio-based Christian Aid Ministries are five children, including an eight-month-old baby.

Standing in front of the coffins of five gang members he says were killed by police, Joseph threatened Haiti’s Prime Minister Ariel Henry and the chief of National Police Leon Charles, saying, “You guys make me cry. I cry water. But I’m going to make you guys cry blood.”

Joseph has the appearance of a man who, with his flat-top haircut, bling and patent-leather shoes wouldn’t look out of place in a 1990s swing-beat video. Like the photographer Foday Sankoh, who founded the Revolutionary United Front in Sierra Leone and helped kickstart that country’s 11-year civil war, or the physically imposing 6ft 6in Abu Bakr or South London’s Gucci-clad gangsters-cum-grime artists, Joseph knows that an aesthetic is as important as an arsenal if you want to transition from being just another hood rat to someone who can flex major financial and maybe even political power.

Hours after Joseph’s throwdown, he claimed his first scalp of the hostage negotiations: Henry’s office announced that Charles had resigned and been replaced by Frantz Elbe, a National Police departmental director. With the FBI now working with Haitian security services and apparently in communication with the 400 Mawozo, its leader was starting to get ahead of the curve by some distance. A general strike by Haitian workers on October 18 over the country’s deteriorating security situation, increasing gang violence and random kidnappings added to an already volatile context that played right into Joseph’s hands.

Having broken the fourth wall of kidnapping, i.e. conceal your identity from all concerned, Joseph has sent out a powerful message: pay up or I’m going out all guns blazing – and taking the hostages down with me. Either way, without knowing what the Feds and Haitian authorities have up their sleeves, neither seem to have much leverage when it comes to dealing with such a ruthless individual.

According to local sources, the 400 Mawoza controls Ganthier in Croix-des-Bouquets, an area just beyond the capital. They are said to have been responsible for 80% of the country’s kidnappings between June and September, as well as several rapes and murders. In April, officials said the gang had snatched 10 people, including seven members of the clergy, prompting the Archdiocese of Port-au-Prince to warn that Haiti faced a “descent into hell”.

Competing with the estimated 165 other gangs operating in the city, the 400 Mawozo are also engaged in the intimidation and extortion of businesses, political figures and ordinary Haitians, allegedly with the support of corrupt politicians and police officers. According to Gédéon Jean, director of local NGO the Center for Analysis and Research in Human Rights, at least 628 abductions have taken place in Haiti this year – already three times last year’s total – making it the kidnap capital of the world.

As outlandish as this latest Haitian tragedy seems, it’s in keeping with the country’s recent, and indeed, well-documented historic troubles, but it also feels ominously like the worst is yet to come. Biblical numbers of illegal Haitian migrants have crossed the Rio Grande from Mexico into the US in recent weeks, following the assassination of Haiti’s previous president, Jovenel Moïse on July 7. A 7.2-magnitude earthquake on August 14 hit the country’s southern peninsula, killing more than 2,200 and displacing many thousands more. With the country on the brink of collapse, serious civil disorder has increased since the missionaries’ kidnapping, and the security services appear unable to cope with the current levels of extreme violence, the abductions and the unfettered gang activity. Following Moïse’s assassination, US President Joe Biden announced that he would send in the Marines to protect the US Embassy in Port-au-Prince, but added that sending in a larger deployment to stabilise the country was “not on the agenda”.

When the West Side Boys faction finally rode their luck by kidnapping a group of British soldiers in Sierra Leone, then-prime minister Tony Blair sent in the SAS and Parachute Regiment to get them back, thus accelerating the end of the civil war. Biden is now in a sticky situation. Haiti isn’t at war with itself – yet – which makes sending in the boys a tough call, especially for a president who talks a big game but has just capitulated in Afghanistan. Suffice it to say, Christian Aid Ministries is about as Middle American as it gets. The kidnapped missionaries and their kin hail from Wisconsin, Ohio, Michigan, Tennessee, Pennsylvania and Oregon, not forgetting Ontario, Canada. With their fate in the hands of the 400 Mawozo, back in the States, the missionaries’ spokesperson, Weston Showalter offered these words: “Pray for the kidnappers, that they would experience the love of Jesus and turn to him, and we see that as their ultimate need.” He added tearfully, “We thank him that he is God and ask him to hear our prayers and bring our families home.”

I have no idea how well read Wilson Joseph is, or how often he watches CNN, the BBC or RT news, but I suspect he’s got a pretty good grasp of how these situations pan out. Knowing that foreign interests propped up the brutal Papa Doc and Baby Doc Duvalier dictatorships from 1957 to 1986, he knows that fortune often favours the bully. Scores of politico-criminal movements started on the streets, and with thuggery as part of their MO, from the Mafia to the Nazis to the narco-trafficantes who continue to pull strings and sever heads in Mexico and Colombia. Closer to home, everyone from the IRA to the Taliban has bombed their way to the negotiating table and had their demands met at national and international level. Wilson Joseph’s war with the US and Haitian authorities, at least, puts him in half-decent historical company.