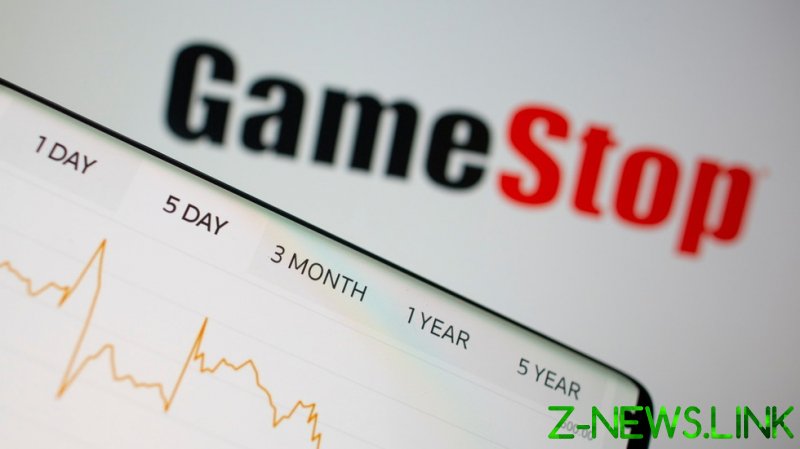 GameStop (GME) dropped as much as 60 percent on Tuesday, dipping below $100 as the Wall Street and mainstream media measures aimed at ‘stabilizing’ the frenzied trading of the past week began kicking in. Retail traders have been unable to use the popular app Robinhood to trade GME and a handful of other hot stocks, giving the hedge funds who played the villain in the story a chance to cut losses in some of their more uncomfortable short positions.

After hitting a whopping $500 per share last week, GameStop has plummeted steeply, losing most of its gains in the following days. At least $27 billion of GameStop’s briefly gained market capitalization evaporated as the hedge funders tried to recoup their losses and – one presumes – breathed a sigh of relief.

Other stocks favored by Reddit’s WallStreetBets forum – which began pumping up GameStop as a sort of revenge against a financial adviser who’d told his customers to short GME mercilessly – have also begun to deflate as many of the traders’ tools, including Robinhood, were taken out of their hands over the last week.

GameStop isn’t expected to turn a profit until 2023, and WallStreetBets’ other picks, including movie theatre chain AMC and mobile phone maker turned cybersecurity firm BlackBerry, aren’t exactly the sort of companies one would name as having a bright future. The investments in GameStop began with a recent infusion of young blood into its board and a pledge to move toward an internet-based business model, but the company remains a brick-and-mortar video game retailer with some serious work to do in turning around its decline.

While the hedge funders had arguably declared war on the Reddit amateur traders last month, calling to short the users’ beloved investments, rather than the other way around, establishment financial reporters initially made a point of depicting the hedgies as wronged investors just trying to keep Americans’ pension plans afloat against the onslaught of trolls wreaking havoc for the sake of wreaking havoc.

Even supposedly left-wing politicians got on board the pearl-clutching express, with Senator Elizabeth Warren (D-Massachusetts) embracing the wounded fat-cats she’d spent her early political career railing against. Andrew Left, the adviser who kicked off the GameStop craze in the first place by calling for a massive shorting, claimed to have lost 100 percent of his investment, though others were able to salvage some of theirs once the amateurs were shut out of their Robinhood accounts and the balance of power returned to the mega-funds.

Some might argue that the surreal trajectory of GameStop reflects one of the core problems with the US stock market in general – an issue it has been difficult to avoid for the last year. Markets boomed during the pandemic even as companies ditched hundreds of thousands of employees and the Federal Reserve’s printers were pushed into overtime.

And while the departure of Redditors from their brief triumph was not necessarily a willing one, the story of screamingly wealthy hedge fund bros doing battle with regular folk who trade on their smartphones has lured Hollywood interest from MGM and Netflix.