Gagging opponents is not unity, conservative reporter who was shoved & rubbed with dirty diaper at BLM rally tells RT 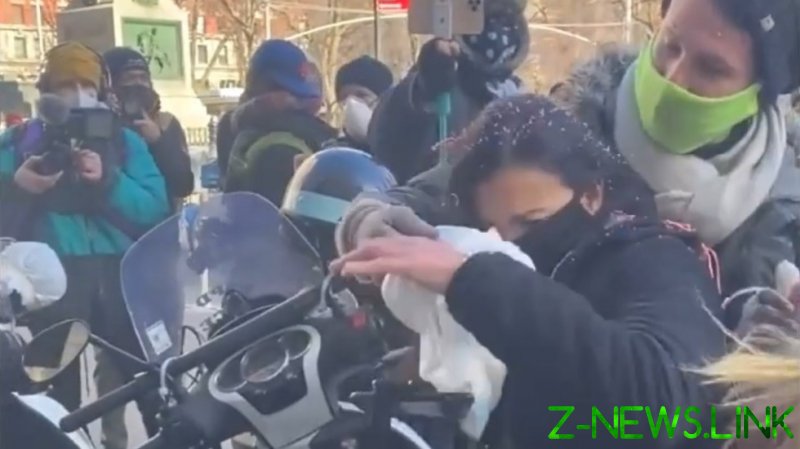 Tara Anne Szczepanski, 33, is a Polish-American political commentator and independent reporter. On January 10, she attended a small protest in Madison Square Park where Black Lives Matter (BLM) activists accosted her after she started filming them.

“The mob turned against me after recognizing that I am a Trump supporter,” she told RT. “With the hatred that is going on currently in America, I felt very much in fear for myself.”

According to Szczepanski and footage of the incident, there were several people covering the BLM rally, but the protesters didn’t want to be filmed and demanded that the cameras were switched off. After she and others refused, she was egged and shoved around, while one activist tried to rub a soiled baby diaper in her face, footage released by the NYPD showed. Szczepanski escaped the angry crowd.

An already tense situation escalated further, after she was identified by a protester. Several of them pursued her, spraying a silly thread at her and calling her a “F*****g Nazi,” a slur she says was particularly hurtful due to her Polish ancestry.

The police later identified and arrested two suspects allegedly involved in the assault, who were both in their early 20s.

Instances of pro-Trump supporters harrassing and assaulting journalists covering their event have been extensively covered by the US mainstream media and blamed on the former president’s “incendiary rhetoric” against the press. When similar behavior is shown by the other side, as was the case with Szczepanski, the interest of the press seems to be far less profound.

Szczepanski says conservative journalists like herself don’t enjoy the same protection as people on the left, including from the mainstream media that is “espousing more left-wing ideology and liberal voices.”

Like many others in her political camp, Szczepanski sees a pro-left bias in the US media landscape, which has been recently manifesting in open acts of censorship, like deplatforming of conservative speakers by the Big Tech. And the divisiveness is becoming worse, contrary to the core message of national unity coming from the Joe Biden administration.

“For true peace to occur, you need people to have civil discourse. It’s not true peace when the other side’s voices are shut off,” she told RT. “It may give a facade of unity or peace, but it’s at the detriment of 75 million Americans who had voted for and do support Donald Trump.”

Political polarization in the US hit new heights after the January 6 riot in Washington, DC, when pro-Trump protesters broke into the Capitol building complex in a last-ditch attempt to prevent Biden’s presidency. The House impeached Trump for the second time in his term for allegedly inciting the attack, but the Senate refused to convict him, with just seven Republicans breaking with the party line.