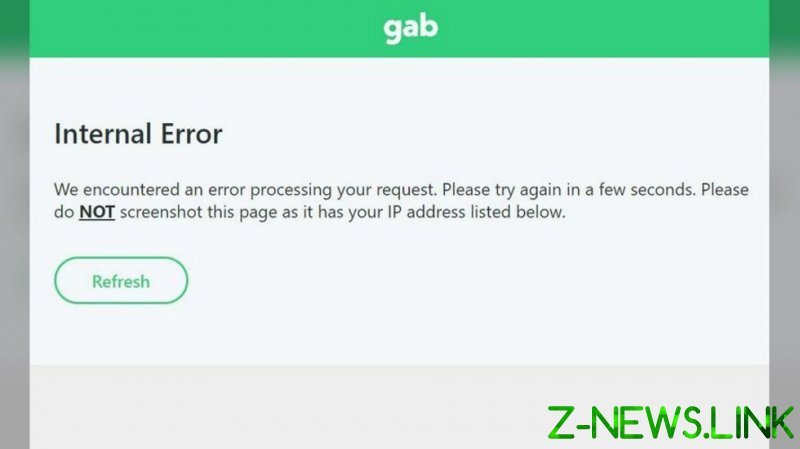 “We took the site down to investigate a security breach,” Gab announced on Monday afternoon via their Twitter account. Users trying to log into Gab were greeted with an “internal error” message and told to try again.

“Banks are banning us. Hackers are attacking us. Journalists are libeling us. Why?” Gab tweeted, calling the US “a totally subverted nation under the occupation of a handful of oligarch tyrants who use their power to destroy dissenters.”

Gab went offline after several verified accounts on the social media platform displayed a ransom note signed “cApTaIn JaXpArO,” claiming the credit for the hack and accusing CEO Andrew Torba of lying to his “despicable users” and not caring about their privacy.

The hacker, whose name is a reference to Captain Jack Sparrow of Disney’s ‘Pirates of the Caribbean’ franchise, claimed that last week’s hack “fully compromised” Gab, including 35 million public and three million private posts, 50,000 emails, 7,000 passwords.

More importantly, they claimed to have obtained 831 verification documents – “which the ransom was about” – but Gab refused to pay 8 Bitcoin for them.

Wired magazine reported last week that a 70-gigabyte trove of data was hacked by “JaXpArO (they/them) & My Little Anonymous Revival Project” and that some of it was provided to an entity called DDoSecrets.

Gab responded by saying they had patched the security vulnerability and blasted DDoSecrets as federal criminals who published ‘Blueleaks’ police documents in June 2020.

Gab was founded in 2016 as a free-speech alternative to Twitter, and has been criticized from the start over Torba’s refusal to police what mainstream media called “hate speech.”

While Torba boasted of 272 million site visits, he admitted that negative media coverage was scaring banks and payment processors from doing business with Gab. In a February interview, he revealed that three banks had backed out of serving Gab – the number has risen to four since – and argued that the only way to stop the “woke orthodoxy of critical theory” is to “proactively cancel them all before they cancel us.”

Several hours before going offline, Gab had tweeted that they and other “alt tech platforms” were being targeted on political grounds by a new ‘Operation Chokepoint’ – a reference to the Obama administration campaign seeking to ban banks from serving legal but politically unpopular businesses, such as payday lenders or gun manufacturers.

President Joe Biden, who was VP under Obama, had reversed the Trump administration’s Fair Access rule that blocked banking discrimination, as one of his first actions upon taking office.