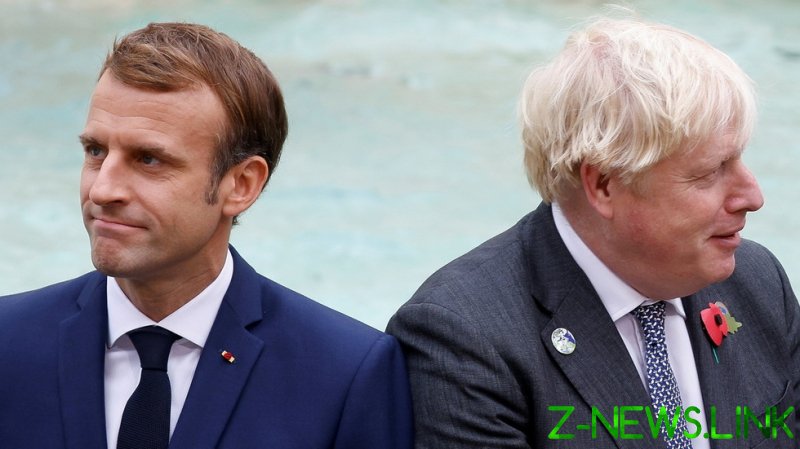 The leaders of the Western world met for the G20 summit in Rome over the weekend. And if that was the prelude to what is going to happen at the COP26 conference in Glasgow, then they’d better rename it FLOP26, because it will end in failure.

All the weekend’s G20 revealed was that many of the world’s leaders either do not trust each other or, in some cases, are clearly at loggerheads. There has, however, been one consistent feature of the bunfights that have taken place, and that is at their centre has been the preening French President Emmanuel Macron.

Macron first took aim at the UK, with whom the French are engaged in a bitter fishing battle. The dispute, which is primarily about the number of French vessels allowed to fish in British waters, escalated last week when the French impounded a British trawler, which it claimed had been fishing illegally in its waters. The French have also said that they will prevent British boats landing in its ports and threatened to cut off the electricity supply to the UK’s Channel Islands.

Nevertheless, Macron claimed that it is the UK which is breaking the Brexit deal and openly questioned the country’s credibility on the world stage. He said, “Make no mistake, it is not just for the Europeans but all of their partners…because when you spend years negotiating a treaty and then a few months later you do the opposite of what was decided on the aspects that suit you the least, it is not a big sign of your credibility.”

Macron later warned that he would consider “retaliation” if the Brits did not yield to his demands to increase the number of licences issued to French fishermen to ply their trade in UK waters. Macron said, “I do not want to have to resort to retaliation because it would not help our fishermen” but “measures must be taken” if there is no movement.

Personally, I think this is all a game as far as Macron is concerned. He knows only too well that bashing the ‘rosbif’, as the French call the Brits, plays well with his domestic audience. It is also doubly important for him to be seen to be strong on the world stage as the French presidential election takes place in spring next year.

Macron’s actions have clearly upset the British, and Boris Johnson at first talked a good game but has since capitulated and has offered the French a further 100 fishing licences. However, I guarantee that Macron will demand more because once a petulance wins, it’s never enough.

It also seems that Macron has an ally in US President Joe Biden. Following a private meeting between the pair, Biden announced that “the United States has no older, no more loyal, no more decent ally than France…they’ve been with us from the beginning – and we will always be there for them.” This can only be taken as a good old slap in the face for Boris Johnson and the so-called ‘special relationship’ with the UK.

Moreover, when Biden met Macron, he was wearing his hare shirt and asking forgiveness for the way the French had been “stabbed in the back” over the recent AUKUS deal. Biden also told Macron that he had no idea that the Australians had not informed Paris that they were going to rip up their agreement to purchase submarines from France.

In doing this, Biden threw Australian PM Scott Morrison under the bus, and Macron accused Morrison of lying to him. Indeed, Morrison had earlier looked a tad sheepish when shaking hands with Macron, but later, in a rebuke to Biden, stated that the AUKUS deal was the right thing for Australia and that “we don’t recoil from that at all.”

If Macron was attempting to drive a wedge between the Anglosphere then he has been successful, primarily, I would suggest, due to Biden’s apparent cognitive decline. First, the US president claimed the French and not the British were his country’s most important ally, and he then insinuated that the Australians had not told him the whole story before the AUKUS deal was signed. Johnson and Morrison must be asking “who needs enemies when you have fair-weather friends like this?”

And it is with all this bad blood in the air that the leaders moved from Rome to Glasgow for the COP26 climate change conference. Of course, they all flew into Scotland on private jets, so there’s no worry about carbon footprints as far as the elites are concerned. It’s just yet another case of “do as I say and not as I do.”

Nevertheless, not all leaders are in attendance. Russian President Vladimir Putin did not travel to Glasgow, nor did his Chinese counterpart Xi Jinping.

Moreover, although Indian PM Narendra Modi is attending the COP26 summit in person, his government has already rejected the idea of net zero targets. Instead, the Indians will argue that those countries that industrialised first – namely the UK and US – should be the first to attain net zero. Or, to put it in other words, wreck their economies. In a sane world, the Indians would be told to go and take a running jump, but they won’t.

Boris Johnson still believes that there is a six in 10 chance of COP26 yielding a positive agreement. However, from what we have witnessed over the weekend in Rome, and the fact that some of the world’s most powerful leaders are either not in attendance or in agreement with the net zero target, I think the British PM is being way over optimistic. Instead, I’d suggest that we all brace ourselves for FLOP26.