Home / WORLD / G20 leaders endorse deal on minimum corporate tax that could make rich states richer, but leave poor ones in the dust

G20 leaders endorse deal on minimum corporate tax that could make rich states richer, but leave poor ones in the dust 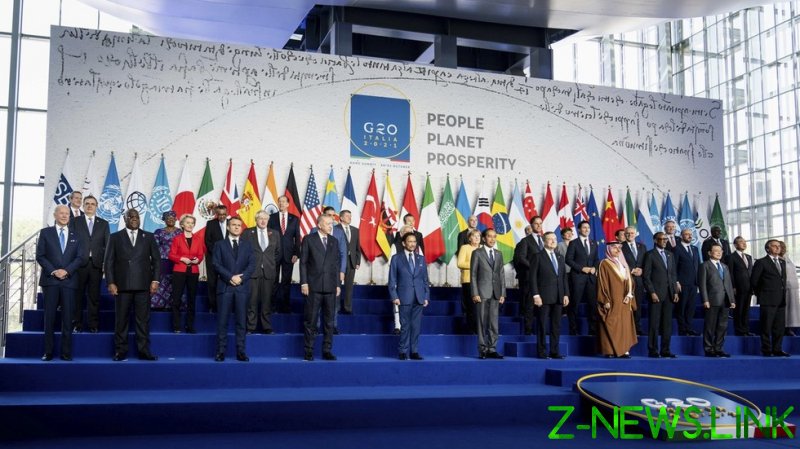 “We call on the OECD-G20 Inclusive Framework on Base Erosion and Profit Shifting to swiftly develop the model rules and multilateral instruments as agreed in the Detailed Implementation Plan, with a view to ensure that the new rules will come into effect at global level in 2023,” the draft conclusions of the two-day G20 summit underway in Rome said, as cited by Reuters.

The move will set a minimum tax of 15% on multinational corporations across the globe, which experts say will grant governments extra revenue to fund social spending programs. G20 leaders also see the tax minimum as a means to offer stability to firms that operate internationally. The rate will only apply to corporations with more than $850 million in annual revenue. It is expected to raise around $150 billion in global tax revenue every year, according to the Organization for Economic Cooperation and Development (OECD), which initially proposed the move.

The tax deal also includes an overhaul of how multinational firms are taxed when earning profits in countries where they have no physical presence. This part of the deal is intended to address the inadequate taxes that US-based tech giants pay in European states despite making hefty profits. The deal proposes to transfer the payment of part of taxes from the states where the company’s headquarters are located to those countries where they operate and make profits.

Still, skeptics argue that the main beneficiaries of the tax, as well as its main enforcers, are rich nations, including the US, which charges a flat corporate tax of 21% and plans to hike it further to 28%. Some say that once implemented, the plan will make it more difficult for corporations to set up operations in states where tax rates are lower. Ireland, for instance, charges only 12.5% on corporations and has been opposed to the plan for years. However, it also succumbed to the accord earlier this month, along with two other low-tax economies, Hungary and Estonia.

The proposal has now been in the making for around a decade. It was already endorsed by the G20 finance ministers earlier this year, but its official approval by the heads of state is seen by experts as a lever that will help turn the vague agreement into actual legislation.

So far, nearly 140 countries representing more than 90% of total global economic output have endorsed the deal, however, each state now has to adjust tax standards at home in a process that could take months or even years.