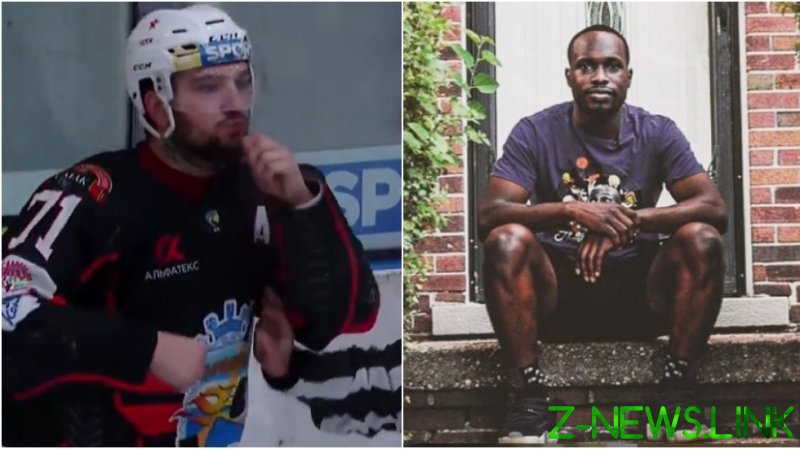 Cameras caught Kremenchuk forward Andrei Deniskin making the taunt towards Donbass Donetsk’s new signing Jalen Smereck, who hails from the United States, in the 36th minute of their league clash.

Understandably, the 23-year-old was immediately sent off for the act but he did attempt to cover his tracks post-game by insisting he does not discriminate against people of different backgrounds.

“During the match, I, being of negative emotions, displayed a gesture that could be considered as an insult [relating to] race,” Deniskin said while offering a public apology to Smereck.

“I respect all people regardless of their race or nationality. Emotions in hockey, unfortunately, are different.”

In their own statement, Donbass condemned “all forms of discrimination” and claimed to be “outraged by the behavior” of Deniskin.

The league had threatened that there could be extra sanctions against the youngster, while Smereck refused to play until Deniskin has been suspended or banned, and has today lived up to its word in a fashion.

Following Deniskin’s ill-advised moment of madness, the league’s disciplinary committee has decided to apply a mandatory three-game ban for the Ukraine international.

However, Deniskin can pay off a further 10-game suspension at a rate of 5,000 hryvnia ($188) per game (to a total of $1,880), in a move that is likely to infuriate those who called for much heavier penalties.

Popular Twitter account the World Hockey Report said that “an appropriate response would be a five-year ban from hockey, plus 500 hours of community service which must be done as a league volunteer. Either that or lifetime ban.”

They added that it “would be nice to see” the UHL and the International Ice Hockey Federation, “make a real statement that this will not be tolerated”.

The former party has apparently failed to do that, with the latter yet to deal with Deniskin.

Until then, however, Donbass are expected to appeal the unsatisfactory ruling.