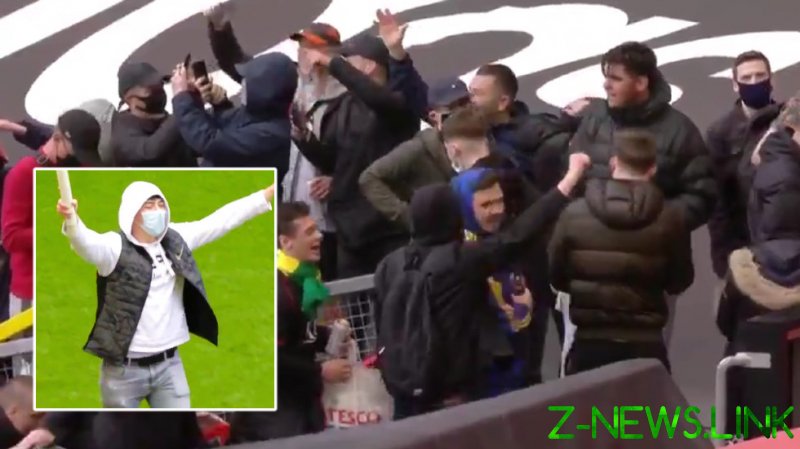 The protest, which has initially been planned to take place outside of Old Trafford, bled into the famous stadium on Sunday after hundreds of fans upset with the ownership of the controversial Glazer family raided the pitch and threw Sunday’s pivotal fixture with arch-rivals Liverpool into doubt.

It is also understood that fans blocked the team bus as it attempted to make its way to the stadium from the nearby Lowry Hotel. Per reports, the team has been advised to remain at the hotel until the safety of the players and the stadium can be guaranteed. A police presence has been noted outside the hotel.

At around 3.15pm local time, 75 minutes before kick-off against Liverpool, further fans streamed into the stadium in another massive security breach at Old Trafford after the initial protestors had been cleared.

The incident is the latest to detail the uproar among the club’s faithful aimed at the American owners of the club.

On Friday, fans angrily told outgoing chief executive Ed Woodward that they were “disgusted, embarrassed and angry” at the club’s leadership, while also carrying banners at Sunday’s protest which read “apology not accepted“.

United owner Joel Glazer issued an apology for his team’s involvement as one of the so-called founding members of the severely-rebuked Super League breakaway plans – however the actions from the throngs of angry fans suggests that any such apology has been firmly thrown back in their faces.

Sunday’s scenes are the latest such incident of fan discontent at the club and follows another protest outside Old Trafford and the club’s Carrington training base last week. Fans had also forced their way into Carrington, while also blocking entrances to the facility. Police were subsequently called.

The protesting fans at the training ground were addressed by manager Ole Gunnar Solksajer, midfielder Nemanja Matic and backroom staff Michael Carrick and Darren Fletcher, at which they moved on.

Social media has been predictably vocal about the storming of Old Trafford, with one fan drawing comparisons between Sunday’s scenes and those which unfolded outside the U.S. Capitol in January.

Another wrote that they “have to admire the initiative, not sure it will result in anything, but at least they are doing something.”

A third supporter also shed some light on what was taking place inside the stadium, out of view of TV cameras: “Someone I know actually got into the changing room too,” they said.

Further updates are expected shortly, including indication from Manchester United and the Premier League as to whether the game might be delayed, or even postponed.