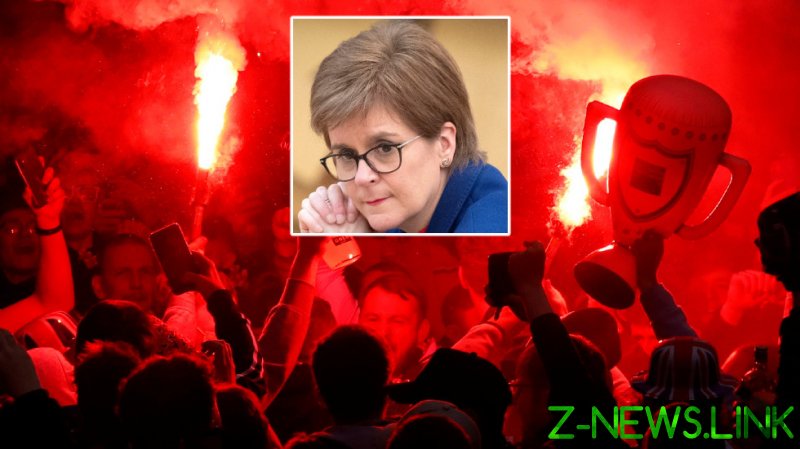 Liverpool legend Steven Gerrard’s team confirmed their status as Scottish champions on Sunday when fierce local rivals Celtic could only manage a scoreless draw away to Dundee United as Rangers completed their journey from financial ruin back to the summit of the league – ending the Hoops’ hopes of a record-breaking 10th successive title in the process.

In the hours after their title win was confirmed, legions of thrilled fans gathered at various points in the city – including at their Ibrox Stadium and the city’s George Square – in direct violation of coronavirus restrictions. The woman charged with overseeing these rules, Nicola Sturgeon, was none-too-pleased with what she saw.

Speaking on Tuesday, Sturgeon said she was “angry” at the “disgraceful” behavior at the celebrations and said that she would be speaking with Police Scotland’s Chief Constable, Iain Livingstone, to ensure that there was no repeat of the widespread rule-breaking.

Scotland’s Deputy First Minister, John Swinney, also hit out at Rangers on Monday, saying that the club’s “silence was deafening” with regard to their stance on the raucous celebrations.

However, the Rangers hierarchy made clear in a letter to Sturgeon that they don’t accept her version of events in which the club did little to dissuade fans from gathering in the streets.

“It is particularly disappointing that there has been a lack of acknowledgement from the Scottish Government to the wide range of efforts we undertook to limit public safety issues,” the club wrote.

“It is also particularly disappointing that Mr Swinney has chosen to lambast Rangers publicly, given the fact that we had proactively initiated engagement with Police Scotland, the SPFL, the Scottish Government as well as a local MP.”

Police say that they made 28 arrests at the celebrations, while a further seven were issued with fixed penalty notices.

The reasons given for the arrests included assaulting police officers, breaking coronavirus regulations and various other charges, such as for the use of flares and sectarian breaches of the peace.