Home / WORLD / From rockstar to woke star: Rock ‘n’ roll has truly gone to the dogs when a band member cancels himself…for reading a book

From rockstar to woke star: Rock ‘n’ roll has truly gone to the dogs when a band member cancels himself…for reading a book 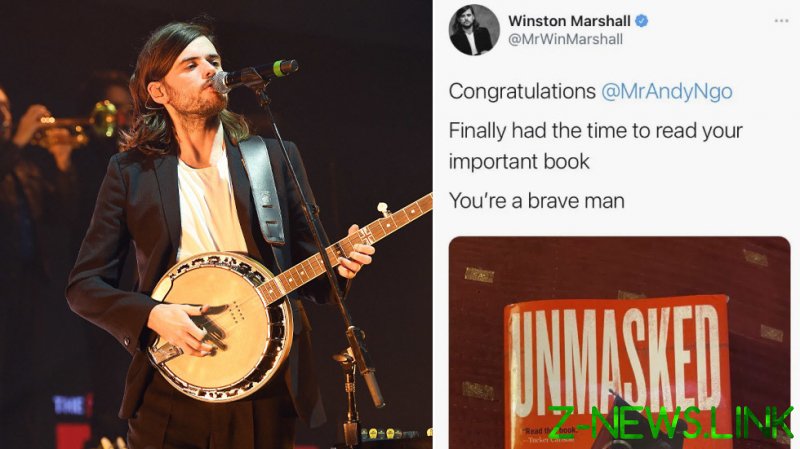 The 27 Club – all those rock gods who died at that age – must be spinning in their graves right now. That elite club includes Jimi Hendrix, Jim Morrison, Kurt Cobain, Brian Jones of the Rolling Stones and the original blues maestro, Robert Johnson. And let’s not forget the girls, Janis Joplin and Amy Winehouse.

Mostly it was the drink and the drugs that took them so young, except Kurt Cobain, who blew his brains out and Jim Morrison, who died of a heart attack in the bath. They’d both ingested way too many substances, of course.

Robert Johnson is said to have been poisoned by the jealous husband of a woman with whom he enjoyed a roll. Anyway, he’d already sold his soul to the devil down at the crossroads, for the price of being able to master the guitar. It was time to pay up.

And yet Keith Richards is still alive and rocking at the age of 77. The Stones’ axeman has probably imbibed more substances than any other human being alive. Ever. It was even once claimed he had all the blood in his body pumped out and replaced, as a bit of a clean-up. Just so he could keep on rocking.

Even the term itself, ‘rock ‘n’ roll’… think about it. It’s not about a nice day out sailing or mountaineering, is it? It was a term used from way back in the 1920s in blues songs to mean, well, a man and woman having sex.

It has become a euphemism for bad behaviour. There’s a long and illustrious list of dirty and dangerous deeds done by the rock gods. Think Keith Moon, another rocker who died early; he didn’t get into the 27 Club because he made it to the ripe old age of 32. No TV was safe in a hotel room when Moon was around – The Who drummer liked to lob them from his window. Blowing up the toilet was another favourite. And parking his Rolls-Royce in the pool, smashing up his drum kits on stage, an endless succession of blondes… You get the picture.

Moon was a busy bad boy right up until his death in 1978, from an overdose in a flat in London’s posh Mayfair, in the same room in which Mama Cass Elliot of the Mamas and Papas had died of a heart attack four years earlier, also at the age of 32.

The Sex Pistols swearing on live TV, bassist Sid Vicious killing his girlfriend (allegedly) and later dying of an overdose at the age of 21. Ozzy Osbourne biting off the head of a bat live on stage.

And what about Jimmy Page? The Led Zeppelin guitar player got heavily into the black magic works of occult leader Aleister Crowley as a teenager, so much so that he even bought his house up beside Loch Ness in the Scottish Highlands. Home of the monster in more ways than one, so the legend goes.

Anyway, you get my drift.

Then we come to March 2021… and Winston Marshall, the Mumford & Sons banjo player. Marshall announced the other day that he’s stepping back from the band after endorsing a book by the right-wing US commentator Andy Ngo on Twitter.

“Finally had the time to read your important book. You’re a brave man,” Marshall tweeted last Sunday about Ngo’s book Unmasked: Inside Antifa’s Radical Plan to Destroy Democracy. The inevitable Twitter storm followed and the message was swiftly deleted. Too late. The mob was already on him. He survived for three whole days, before releasing a statement. “Over the past few days I have come to better understand the pain caused by the book I endorsed. I have offended not only a lot of people I don’t know, but also those closest to me, including my bandmates, and for that I am truly sorry.”

Marshall announced he would take time off from the band, “to examine my blindspots. For now, please know that I realise how my endorsements have the potential to be viewed as approvals of hateful, divisive behaviour. I apologise, as this was not at all my intention.”

Man, you what? How wet and weak was that? Can you imagine Noel or Liam Gallagher issuing such a dweeby statement? Those Oasis brothers split because they wanted to smash each other’s faces in, and they’re still not talking almost a dozen years later.

And then he’s the son of the investor Sir Paul Marshall, a hedge fund founder worth around £630 million. His mother’s side has links to the French aristocracy. His auntie is posh Penny Marshall, the ITN reporter. He also went to St Paul’s, the public school that sits sedately on the River Thames. He even identifies as a ‘trustafarian’  – meaning he played music because, well, he had no real need to ever do a day’s work in his life. His old man is loaded. Say no more.

Plus, he didn’t even quit or storm out after a violent altercation with other band members. He’s just taking time out to have a bit of a ponder – probably hoping the mob will drift away from his door soon enough, en route to cancelling some other poor schmuck with a Twitter feed.