Home / WORLD / From protests and crashes to diplomatic incidents and Covid, here are some of the Tokyo Olympics’ craziest, most memorable moments

From protests and crashes to diplomatic incidents and Covid, here are some of the Tokyo Olympics’ craziest, most memorable moments 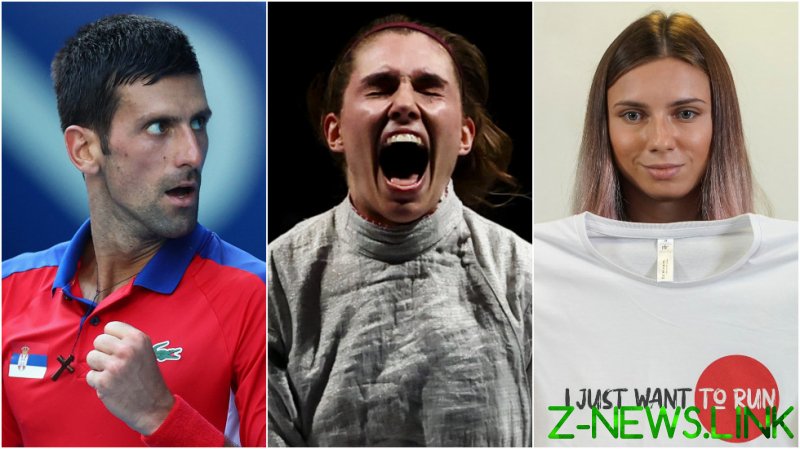 Whether there was joy or despair for the athletes at the center of it, every day of the Games seemed to surface more surprises, with the eyes of the world on the mid-pandemic action in a country whose people had been somewhat reluctant to host an influx of sporting entourages.

Team USA led the way in the medals table with 113, although China’s count of 38 golds was only one fewer than the Americans, with Japan, Team GB and the Russian Olympic Committee – the banner Russian athletes appeared under as a result of a ruling by doping bosses – not far behind.

Here, we look back at some of the most memorable events and incidents from Tokyo 2020, including political outrage, dubious judging and a creative deployment of a condom…

Team USA talisman Megan Rapinoe has no love lost with former US president Donald Trump, and the Republican ranter did not miss the chance to critique the US Women’s National Team’s underperformance at the Games, describing their best-known player as “the woman with the purple hair” who “played terribly” and “spends too much time thinking about Radical Left politics.

Trump savaged the misfiring team’s shock 3-0 defeat to Sweden early in the tournament, which hindsight shows was a warning sign after they were later dumped out by Canada.

At 36, Rapinoe is unlikely to appear at the Olympics again, although she had the consolation of celebrating partner Sue Bird’s basketball gold medal with Team USA, which was Bird’s fifth successive title at the Games.

Archers keep their cool after a start too hot to handle

There were concerns for athletes in the intense heat of the Tokyo region from the outset of the Games, and archery ace Svetlana Gomboeva was an unfortunate early casualty of the conditions, capturing a few headlines after collapsing in the heat.

Gomboeva was soon back to her best and, alongside Ksenia Perova and Elena Osipova, scored a silver medal in the team event, only being denied by the all-conquering South Koreans.

Pozdniakova ended the game halfway to equaling her dad’s haul after winning the team foil fencing final against France, which meant Velikaya, who was also on the team, did not depart without gold.

Of the many teenage talents challenging for honors, few were as young as Momiji Nishiya, the 13-year-old inaugural winner of the first ever women’s skateboard gold medal at the Olympics.

Japan’s youngest ever Games medalist beat Brazilian Rayssa Leal, who turned 13 in January, and compatriot Funa Nakayama, at a relatively ancient 16 years of age. That made for a podium with a combined age younger than some individual competitors.

The Russian men’s artistic gymnastics team went one better than they did in 2016, narrowly edging out Japan to take gold in a victory that left the quartet in tears on the floor.

Remarkably, Artur Dalaloyan had torn his achilles tendon only three months earlier, and there was pain to come for Denis Ablyazin, who had to publicly tell his fans to calm down amid accusations that he had been robbed of vault gold.

There was a note of frustration after Ablyazin collected his third successive silver medal, though: after losing to South Korea’s Shin Jea-hwan on a tie-break that seemed to have been adjudged in somewhat improvisational manner, the five-time Olympic medalist and former world champion admitted to confusion over how the result had been decided.

Big guns go out as tennis stars swelter in the heat

Perhaps because of the immense physical exertion required on court, tennis stars seemed to make more noise – and, arguably, suffer more – than most.

Daniil Medvedev took his top off and issued a health warning for the conditions, Anastasia Pavlyuchenkova needed ice packs and oxygen and Novak Djokovic argued that matches should have taken place later in the day.

The world number one was on tempestuous form, throwing a racket and hammering a net on his way to being ousted by champion Alex Zverev in the men’s singles semifinals.

Zverev beat Karen Khachanov in the final, and Aslan Karatsev and Elena Vesnina beat Djokovic and Nina Stojanovic on their way to an all-Russian doubles final in which they were edged out by Pavlyuchenkova and Andrey Rublev.

Home favorite Naomi Osaka, who had launched the Games, lost in straight sets to finalist Marketa Vondrousova in the third round.

Tutored from a young age by her avid hunter grandfathers, Vitalina Batsarashkina’s decades of dedication hit the spot when she made history by becoming the first female shooter to win three medals at the same Olympics.

It might not have happened had she not spotted a freak combination of misfiring technology and judging slackness that nearly caused one of her shots not to be recorded, but she was not to be dnied, claiming gold in the 25m and 10m pistol events and silver in the 10m air pistol mixed teams contest.

As well as the enchanting backstory of a life spent honing her skills, Batsarashkina’s stance also went viral, with fans charmed by an apparently laidback, side-on style that includes keeping one hand in her pocket.

Crash, bang, wallop and early-morning expletives on the cycle track

While the skateboarding and BMX tournaments often looked terrifying – there was relief when American BMX star Connor Fields was announced to be recovering despite a brain haemorrhage following a crash – there were two curious collisions involving Team GB racers on one day in quick succession.

Frederik Madsen was widely condemned for ploughing into the back of Charlie Tanfield and loudly swearing at his team while his rival was in a sorry state on the floor.

The clash caused sufficient commotion for judges to deliberate over whether Denmark should be allowed to proceed to the final, as well as an apology from broadcasters for foul language early in the day.

Katie Archibald then crashed into teammate Neah Evans. “It’s like you turn up to school completely naked,” she said of the fiasco, adding a further strange twist with her choice of analogy.

“You realize you’re not dead, so you continue on.”

‘No-sex’ beds made from cardboard

Several former athletes have admitted that the Games can prove a promiscuous setting, so there were rumors that the cardboard beds provided to athletes in Tokyo had been designed to deter them from sex amid concerns about close contact and Covid.

Irish gymnast Rhys McClenaghan tested the theory by jumping on his one, and a group of Israeli athletes earned condemnation on social media after filing themselves following suit.

Arriving during a period when pre-match gestures can seem ubiquitous in elite sport, these Games were prefaced by an amendment to guidelines by organizers that seemed to clear the way for athletes to more readily take part in acts of protest before events.

The Team GB women’s football squad was one of the more high-profile participants, having insisted that they viewed the taking of the knee was more important than ever.

US shot-put silver medalist Raven Saunders is being investigated by the International Olympic Committee over an ‘X’ gesture, and US fencer Alen Hadzic’s own team appeared to protest against him, wearing pink over accusations by multiple women that he had engaged in sexual misconduct.

Microphones picked up Barshim asking whether both men could be given gold. Following deliberations with officials, the pair prevailed together in a moment of mutual respect that was hailed by many as the best of the Games.

It was worth it for Tamberi’s reaction alone: the overjoyed man known as ‘Halfshave’ leapt into Barshim’s arms on the track in footage that is certain to be remembered forever.

The three-time world champion, alas, was left in tears after judges gave gold to Ashram, with a wave of outrage greeting the decision.

Chernobyl for Ukraine, riots for Haiti, embarrassment for broadcasters

In a farce that some viewers guessed had been the product of running with the first image that came up in a Google search for each country, South Korean TV station MBC managed to baffle and offend its viewers with a range of shoddy images to symbolize nations when it screened the opening ceremony.

That led to Ukraine being represented by a black-and-white photo of the Chernobyl power plant, with the decision to link the team to one of the country’s worst disasters reasonably interpreted as stupendously insensitive by most viewers.

Bosses at the station issued an apology for the shambles, which also saw Haiti portrayed with an image of a riot.

First transgender athlete at Olympics goes out early in weightlifting

As the first transgender athlete to take part in the Olympics, New Zealander Laurel Hubbard had been the subject of fierce debate long before she took part in the super-heavyweight weightlifting tournament, in which she failed to progress to the latter stages.

Softly-spoken Hubbard acknowledged that arguments over the rules regarding testosterone levels will continue, with the IOC’s top medical boss revealing that they are about to be revised.

The 43-year-old said she wanted to encourage people to be themselves, and her detractors will have felt some relief at her suggestion that she is now likely to retire.

American gymnastics great Simone Biles had been expected to provide major stories, although few would have anticipated that the four-time gold medalist in 2016 would do so by withdrawing from four events citing mental health challenges.

A cheerleader for her team in the events that followed, Biles’ decision caused abundant debate before Team USA excitedly announced that she would return for the balance beam final, in which she took bronze with a return to something like her best in a category that is not her specialism.

“I was just going out there doing this for me,” she smiled afterwards.