From Kiev staged a serious emergency 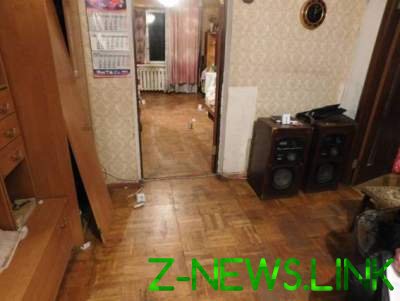 To the malefactor threatens till 8 years of imprisonment

In Kiev, the son beat his mother and then attacked with a knife at his brother. As a result, victims with injuries of varying severity were hospitalized. The attacker was taken to the hospital.

About it reported in Department of communication of the police of Kiev.

The duty of the Dnipro police Department received a report that the hospital was hospitalized two people of Kiev. 87-year-old woman was diagnosed with a closed craniocerebral injury and brain concussion, and her 57-year-old son – a penetrating stab wound to the chest and numerous bruises of soft tissues of the head and spine.

According to the investigative team, such injuries suffered during a quarrel with his cousin, the second son of the owner of the apartment.

The incident occurred in the Dneprovsky district of Kiev on the street Pyotr Zaporozhets. At the scene were seized a kitchen knife, which he sent for examination.

According to preliminary reports that 43-year-old man started a fight with her mother. After the verbal threat, the man repeatedly struck the woman on the head. His brother, who witnessed the event, intervened in the conflict and wanted to protect the mother, but the result was seriously injured.

The victims were given necessary medical assistance. A man with stab wounds under medical supervision.

The malefactor was detained by militiamen. Initiated criminal proceedings under part 1 of article 121 (Deliberate heavy injury) Criminal code of Ukraine. To it threatens till 8 years of imprisonment.

As previously reported, the 33-year-old resident of Fastov was severely beaten by police. Soon the bully is waiting for the court.