Fright USA took the lead to reduce the supply of oil

The historical decline of oil supplies on the world market of 12 million barrels per day continues producing countries realize it sooner than expected, reported the International energy Agency (IEA). 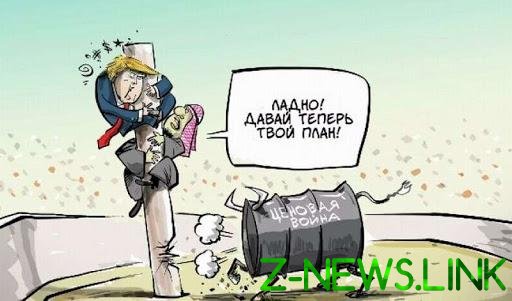 “The market showed their strength and proved that the pain from the low prices experienced by all manufacturers,” said the International energy Agency. They noted that the observed large-scale reduction in countries that are not members of OPEC+.

The United States are among the leaders to reduce the supply.

According to the IEA, they will be reduced by 2 million barrels per day in may. At the same time, information Management, US Department of energy reported that supplies fell by 900 thousand barrels. This decline occurs for the first time and can say that the production is much lower, I noticed on Twitter a leading correspondent for Bloomberg energy Javie Blas.

Just four years ago the Prince of Saudi Arabia Salman promised that in 2020 it will be interested in the price of oil: “We can live without oil”.

As practice showed, this year the price of oil, the actual ruler of the Wahhabi dictatorship of concern is much stronger than in 2016.

Unfortunately for the Saudis, the world is cruel. As soon as the tanks were filled and grew, the price of the freight of tankers, which themselves have become the storage of oil, optimism they have markedly diminished. The last hopes were dashed in the first half of may, when it became obvious that the enforced restriction within OPEC+ did not lead to a significant price rise, the proposal still significantly exceeds demand.

And Russia shows Olympic calm and for the first time surpassed Saudi Arabia in terms of oil supplies to China.

Culm, broken stubborn Prince Salman, was his conversation with the President of the United States trump. After which Riyadh announced a unilateral production cuts since June 1, another million barrels. But that did not stop.

Writes Vloomberg, followed by Saudis about the additional excess stated in the transaction OPEC+, reductions, said Qatar and the United Arab Emirates.

The publication claims that this is the biggest drop in 18 years, but, as is evident from the graph below, the decline here sink to the level of the early 80-ies of the last century.

Yes, Vloomberg presents it as politically correct: “… because they /Saudis/ lead in the global effort to stabilize the market.” But everyone already know that Saudi Arabia driven, as the heroes of the drama Pollack.

Informed sources, customers, and traders have reported to the Agency Vloomberg that at least a dozen customers in Asia received a notice from Saudi Aramco on the reduction of supply in June. Significantly greater reduction expect the supply of Saudi oil in the US and the EU.

“The Saudis will send less oil in the Atlantic basin. It’s also a gesture towards the Russian – say, the Saudis want to bring down the European market.”

Don’t want to – can not. Been trying for two months to squeeze out of the EU market of Russian oil. It didn’t happen.

The representatives of the media Aramco declined to comment to the Agency Vloomberg. However, on condition of anonymity, officials said that 8 out of 12 refineries in Asia said delivery reduced to 20-30% of the contract. The majority of the cuts came in buyers in China and India.

Meantime, one thing is clear – the first and main victim of the oil war it became Saudi Arabia. And in many ways, not because of the policy of Russia, as the result of their own ambitions and the policy of its main ally – the USA. And next USA.

And as oil prices still not satisfied with Saudi Arabia, USA and Russia (in that order) as the main players need a price of at least 71, 60 and 42 per dollar, respectively, the war will continue.