Home / WORLD / French traveller crossed the ocean in a barrel

French traveller crossed the ocean in a barrel 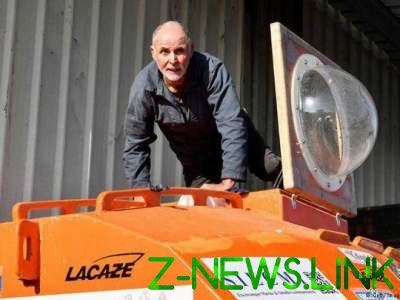 French traveler Jean-Jacques Savin crossed the Atlantic in a barrel, it took him 122 days.

“The French traveller, 72-year-old Jean-Jacques Savin, before it completed its 122-day trip in a barrel over the Atlantic ocean. He went in December, having sailed from the Canary Islands, and a few months got to the Caribbean, crossed the Meridian”, – writes the edition.

It is noted that currently the barrel is “drifting toward Florida,” and he needs to find a port where he could transfer to a cargo ship, together with the barrel it took them to the island of Martinique in the Caribbean sea, where a man waits for family.

According to the newspaper, the ship is a barrel painted in orange cylindrical container without a sail length of 3 meters, a width of 2.10 meters and a weight of 450 kg. It is made of thick plywood. Placed inside a bed, kitchen, table for nautical charts and navigation equipment. Built unusual craft on one of the shipyards of the Department of Gironde in southwest France.

On this unusual voyage of Jean-Jacques Savin was inspired by the feat of the French physician, biologist and traveler Alain Bombing, which in 1952 solo across the Atlantic ocean from the Canary Islands to Barbados in a rubber boat.

According to the traveler, in the future, he plans to cross by swimming across the English channel.