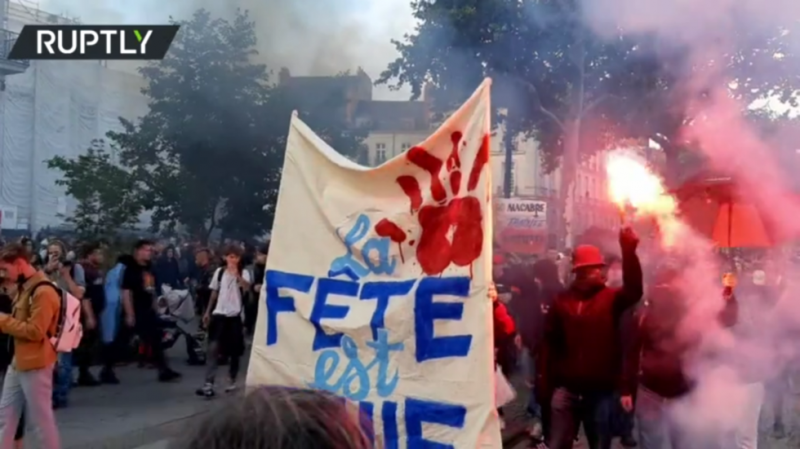 Annual summer street music festivals were the first public events to be held after the 11pm-6am curfew was lifted in French cities, and were permitted as long as attendees followed health safety protocols.

Around 600 people gathered in Place du Bouffay in Nantes to march in memory of Steve Maia Canico, a 24-year-old man who drowned after falling into a river during a police raid at the festival in 2019. According to local media, people chanted, “Everyone hates the police,” and protested against coronavirus-related restrictions.

Police said that the rally was unauthorized and fired volleys of tear gas to prevent the procession from reaching the city center. Police later reported that 11 people were detained and four officers injured in the clashes.

Earlier that day, a separate march in memory of Canico brought together 1,100 people and took place peacefully. Participants brought roses and chanted, “We don’t forget, we don’t forgive,” with some wearing T-shirts bearing the words “Justice for Steve.”

Clashes also took place in the city of Annecy in southeastern France, where rioters threw glass bottles and other projectiles at police, who responded with tear gas. Regional authorities said on social media that two officers had sustained light injuries, while security officials told AFP that three officers were hurt. Police sources told the media that eight people were arrested.

According to Le Parisien newspaper, festival-goers in the French capital were banned from gathering in groups of more than 10 people outdoors. Nevertheless, thousands of revelers, who were not wearing masks or social distancing, flocked to the banks of the Seine and outside the iconic Hotel de Ville, as well as on the lawns of Les Invalides and the Tuileries Garden. Police were called in to break up the crowds, arresting 25, according to the media.

The general requirement to wear masks outdoors in France was dropped last week. However, people still must cover their nose and mouth when attending large gatherings.