Home / WORLD / French FM says it will take time and US action to restore trust, State Department makes no mention of it 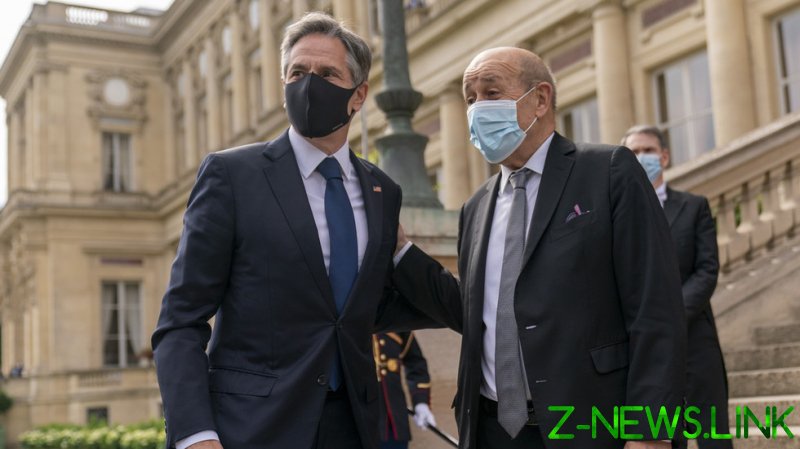 Le Drian had famously called last week’s US announcement of the submarine pact with the UK and Australia a “stab in the back” to France, which lost a major ship-building deal with Canberra as a result. He canceled his planned meeting with his British counterpart and said he had no plans to meet with Blinken except in a hallway somewhere, as France threatened to “rethink the concept of alliances and partnerships.”

He did meet with Blinken on Thursday, however. The French account of the meeting says it took place at France’s permanent mission to the UN – meaning that Blinken came as a guest – and dealt with “the in-depth consultations that the two countries are undertaking with the aim of rebuilding trust.”

While the phone call from US President Joe Biden to his French counterpart Emmanuel Macron was a “first step” in that process, Le Drian “underlined that resolving the crisis between our two countries would take time and require actions,” his statement said.

Biden reached out to Macron on Wednesday, and the White House and the Elysee Palace issued an identical readout of the call in the aftermath. Biden agreed that France should not have been left in the dark about “matters of strategic interest” and that “a stronger and more capable European defense” will benefit global security and NATO. Macron, meanwhile, said he would return the ambassador he had recalled from Washington last Friday.

Le Drian’s statement echoed the words of Macron’s spokesman Gabriel Attal in the run-up to the presidential call, who said that Paris hoped the US would detail “concrete measures” to restore trust between the two nations.

Foggy Bottom’s account of the meeting with Le Drian, however, made no mention of trust or the breach of relations between the two allies. State Department spokesman Ned Price even left out the exact location of the meeting, saying it was “in New York City on the margins of the UN General Assembly.”

The two diplomats “spoke about plans for in-depth bilateral consultations on issues of strategic importance,” Price added, including “the EU Strategy for Cooperation in the Indo-Pacific, which the United States welcomes, and the need for close cooperation with France and other European allies and partners active in the region.”

In addition to the now-scuttled shipbuilding deal with Canberra, France has several territories in the South Pacific where it maintains a military presence. Yet Paris was not informed in advance of the new security pact between the US, UK and Australia, which envisions providing Canberra with a number of nuclear-powered submarines in the near future, making it the first non-atomic power to operate such vessels.