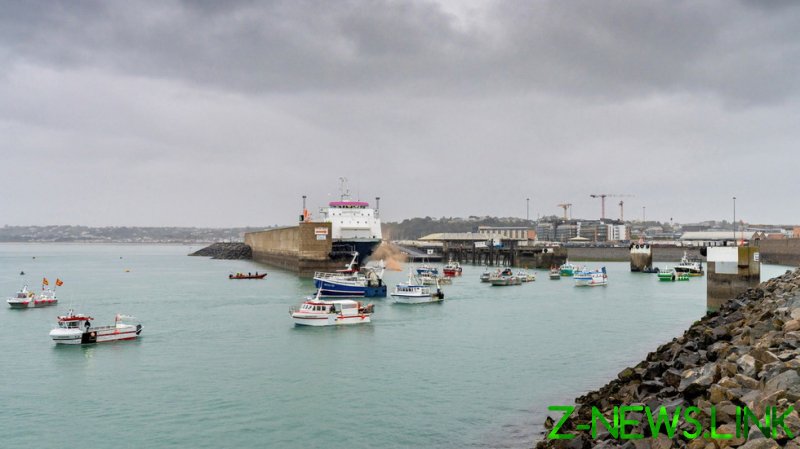 Data from marinetraffic.com shows around 25 French-registered vessels stationed just outside Jersey’s main port on Thursday morning, although some eyewitnesses claim there are more.

The trawlermen are protesting the dearth of licences granted to French fishing vessels following the Brexit agreement which saw the EU lose its jurisdiction over British waters.

Hugo Lehuby, a representative for the Normandy regional fishing committee, told Reuters that “this is not a blockade… It’s not our objective to smash stuff up.”

“The objective is to express our unhappiness about the restrictive measures that were imposed,” he added.

In TV footage, one of the Royal Navy vessels deployed, the HMS Tamar, can be seen further out to sea. The 90-meter-long patrol boat was one of two vessels deployed to the island.

Media stationed on the island ahead of the protest reported a number of clashes between French and local ships, one of which was caught on camera.

On Wednesday, Jersey’s external relations minister, Ian Gorst, hit back at France after Paris threatened to cut power supplies to the island in response to the Channel island’s non-issuance of full fishing licences to French fishermen. In 2019, 95% of Jersey’s electricity came from France.

Gorst said that of the 41 French vessels who were issued licences last week, the majority had provided the historic fishing data that Jersey had requested. However, 17 had not, “and that’s where the problem is.”

French fishermen have protested frequently that they’ve struggled to obtain new licences to fish UK waters since Brexit. In April, a group of trawlermen staged a protest at Boulogne, blockading trucks delivering UK-landed fish to France.