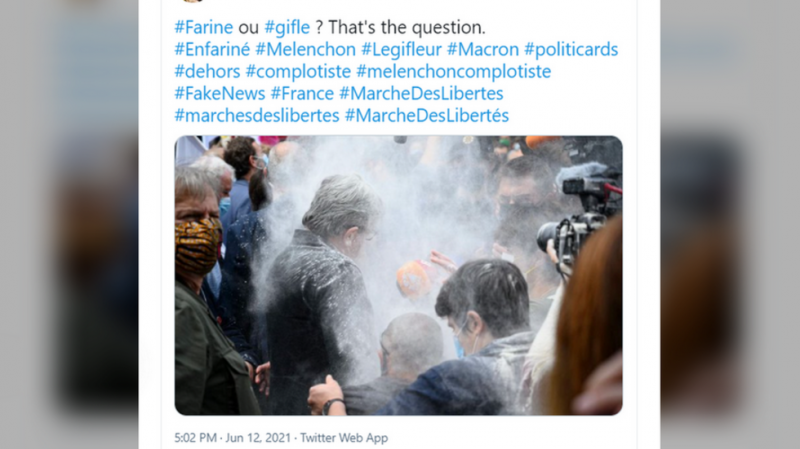 The Socialist Party (SP) and the far-left La France Insoumise (LFI) party led demonstrations along with unions and environmental groups in around 140 cities across the country on Saturday.

“The freedom camp must again show its potential for mobilization in the fight against the far right and racism,” LFI MP Eric Coquerel said.

SP leader Benoit Hamon tweeted that his party had marched “in the name of republican morals” and against “the spread of far-right ideas.”

A masked man threw flour in RFI leader Jean-Luc Melenchon’s face when he was speaking to reporters on Place de Clichy, in Paris. The politician, who took off his glasses and wiped his face with a handkerchief afterwards, said the “cowardly” attack “could have been worse” and that “the line was crossed” a few days ago, when a member of the public slapped French President Emmanuel Macron across the face.

“The right reaction is to show human solidarity and calmness. They don’t scare me,” Melenchon said.

The assailant told reporters he was a “sovereigntist,” describing his action as “a gesture of protest.” According to French media, he was identified as the owner of a YouTube channel that broadcasts right-wing commentary. AFP cited police and judicial sources saying that two suspects in the attack on Melenchon have been arrested.

Similarly, Francois de Rugy, an MP from Macron’s La Republique En Marche party and the former environment minister, was pelted with flour by a woman in the western city of Nantes on Friday.

According to the Ouest-France newspaper, the attacker was a 24-year-old left-wing activist who had previously been arrested for demonstrating.

The woman shouted, “Return the lobster!” in an apparent reference to the allegations that de Rugy spent taxpayers’ money on lavish dinners at which lobster was served. The scandal in 2019 prompted de Rugy to resign as a minister.

De Rugy filed a police complaint following the incident. “Debate – always. Physical assault – never,” he tweeted. He told the media that there was a drive to “attack more and more elected officials, without any limits.”

Macron was slapped by a 28-year-old man named Damien Tarel during the president’s tour in southern France on Tuesday. Tarel, who was described by the media as a man with far-right views, said that he had strongly disagreed with Macron’s policies. The attacker was sentenced to 18 months in prison, 14 of which were suspended.

The assault on the president was condemned by politicians from Macron’s party and the opposition alike.

France Info radio cited a Ministry of the Interior report that 37,000 people took part in the rallies on Saturday, including 9,000 in Paris. The organizers claimed that 150,000 had showed up, including 70,000 in the capital.