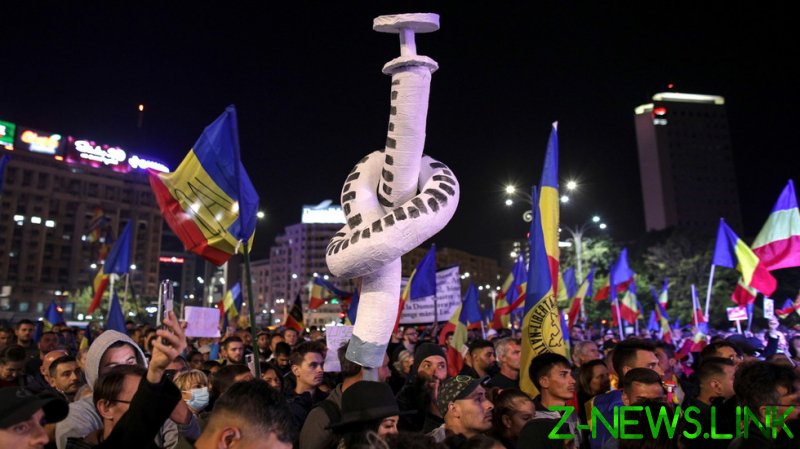 An estimated 15,000 people gathered in University and Victory squares outside government offices in Bucharest on Saturday, chanting ‘Freedom without certificates’ and ‘Down with the government’.

The latest round of restrictions went into effect on Sunday, limiting access to entertainment venues as well as introducing weekend curfews for unvaccinated individuals.

Authorities also issued mask mandates for indoor and outdoor public spaces in areas with more than 6 coronavirus cases per 1,000 residents, including the capital.

Romania, which is home to some 19 million people, ranks second-lowest for vaccinations across the 27-member state EU bloc, with less than 28 percent of the population vaccinated with two doses. On Tuesday, Romania has begun ‘recommending’ a booster jab, and seeks to make the vaccinations mandatory for doctors and other healthcare staff.

With a total of 1.24 officially recorded cases and some 37,000 deaths since the beginning of the pandemic, Romania has seen a sharp spike in new infections over the past weeks, as authorities fear hospitals will soon run out of intensive care units.

Meanwhile, in France some 48,000 people hit the streets for the ninth consecutive weekend of protests. Rallies began in mid-July after President Emmanuel Macron’s government introduced a system that made presenting a vaccination certificate or negative Covid-19 test obligatory for those wishing to visit a restaurant, theater, cinema and shopping mall or travel on a long-distance train.