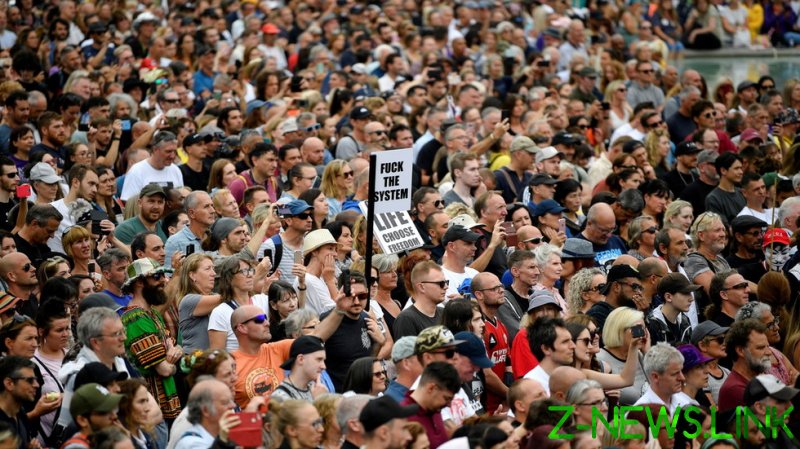 Thousands of people have gathered at the Trafalgar square in London on Saturday for the so-called ‘Freedom Rally’ to protest the restrictive measures introduced amid the ongoing Covid-19 pandemic. The demonstrators flooded almost the entire square, holding placards and banners that read: “No to forced testing” and “No to forced vaccination.”

Many activists went as far as to accuse the government of “crimes against humanity,” while banners seen in the crowd ranged from 5G conspiracy theories to flags reading “Trump for 2024”.

Even though minor scuffles erupted on the sidelines of the event, resulting in several arrests, the rally was otherwise peaceful. The gathering was attended by the controversial media personality, Katie Hopkins, who just returned from Australia that cancelled her visa over a quarantine breach. Former TV presenter turned conspiracy theorist David Icke was also present, as well as Piers Corbyn, the brother of the former Labour leader, Jeremy Corbyn.

But one of the speakers, Kate Shemirani, a former nurse-turned-anti-vaxxer and a conspiracy theorist, triggered a particularly major controversy. She took the stage to declare vaccines “Satanic” and describe them as a part of a great surveillance scheme – while urging the rally participants to send her names of doctors and nurses involved in the vaccination campaign.

The video of her fierce speech quickly spread on social media, prompting an angry response from the London mayor, Sadiq Khan. “I have raised it directly with the Met Police,” he said, while praising the health care specialists as “heroes of this pandemic.”

“This is what NHS staff woke up to this morning. A rally talking about hanging doctors and nurses,” the ‘NHS million campaign said on Twitter, also calling on police to respond to the “hatred and violence towards our hard working NHS staff.”

Elsewhere in the UK, protesters went beyond chanting provocative slogans. In Manchester, a group of anti-vaccination activists sought to storm a local Covid-19 testing center, forcing police to deploy additional guards to the facility.

In Leeds, the protesting crowds blocked traffic as they swarmed the streets. The disruption resulted in several local bus companies halting services on some lanes.

The protests come in response to the government plans to introduce the so-called “vaccination passports.” On Monday, Prime Minister Boris Johnson said that a proof of vaccination will soon be needed to enter nightclubs and other venues that have just reopened this week. The announcement was met with widespread resentment and even angered some MPs, who vowed to vote against the measure.