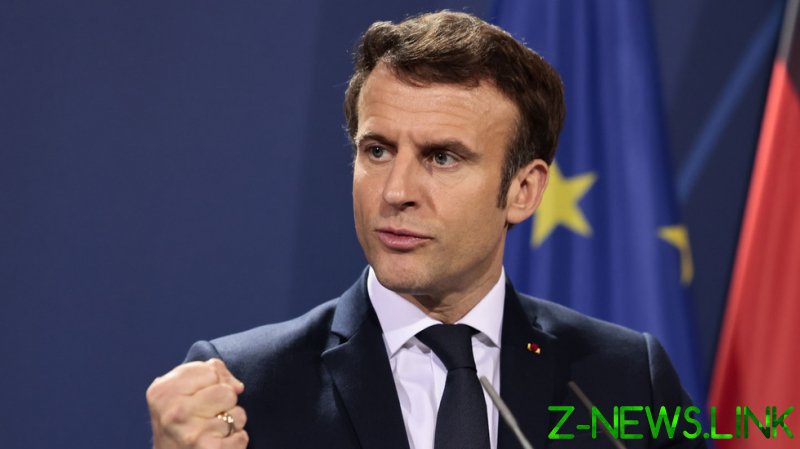 During NATO’s US-led intervention in Iraq, then-UK Prime Minister Tony Blair played the role of shotgun-riding sidekick to then-US President George W. Bush when the prime minister was in the best position to mitigate the headlong rush into war. Now, the role of enabler in the conflict ginned up by NATO against Russia in Ukraine goes to French President Emmanuel Macron. And it’s the people of Europe – including French citizens who are set to head to the polls on April 10 and 24 to decide whether Macron deserves a second five-year presidential mandate – who are on the verge of realizing just how much Macron’s kowtowing to the US is going to personally cost them.

In February 2019, Foreign Policy magazine claimed that “Macron is going full De Gaulle,” and that, “France’s president is pushing around Britain, Germany, and Italy – and going back to his country’s foreign-policy roots.” If it truly had been the case that Macron was acting like the legendary French president and former World War II era General Charles de Gaulle, then Macron would have stood up to the US as it pushed its NATO allies to arm and train Ukrainian fighters while recklessly and flagrantly ramping up antagonism and belligerence towards Russia.

President de Gaulle was so incensed by Washington’s willingness to have France’s armed forces come under US-led NATO collective control that he pulled Paris out of the integrated military command in 1966, at the very height of the Cold War with the Soviet Union that represented the military alliance’s entire raison d’être. De Gaulle shuttled between Moscow and Washington afterwards, armed with the credibility of having rejected strict alignment with either global superpower, and thereby allowing him to act as a truly honest and independent broker on both sides of the Iron Curtain. To further underscore France’s total independence, de Gaulle ratified a foreign affairs, science, and technology cooperation agreement that same year with the Soviet Union, which set France on a divergent course from its Western allies. 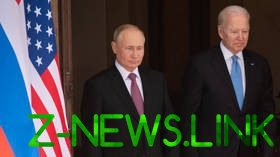 But in 2009, French President Nicolas Sarkozy reintegrated France into NATO, and Macron has been trying to regain France’s previous reputation as a truly independent broker between Moscow and Washington. He even tried to reorient NATO’s strategic objectives by calling it “brain dead” and emphasizing that it should redefine its focus to counterterrorism missions. Macron has also advocated in favor of the Gaullist position of Europe as an independent world power unto itself.

But recent actions speak much louder than Macron’s words. And it didn’t start with the Ukraine conflict. Last year, the Australian government canceled a €50 billion submarine acquisition contract with France, with Washington being the ultimate beneficiary, as President Joe Biden announced that a new China-targeting alliance would include Australia, Britain, and the US, with France excluded despite having significant overseas territories in the region.

Despite various French experts suggesting that Macron should have responded to the costly snub by pulling France out of US-led NATO, Macron instead settled for undefined future American help in the Sahel region of Africa. Today, the current value of that US offer is questionable in the wake of France’s withdrawal from Mali.

So what net gain did Macron secure for France in exchange for shrugging off Washington’s screw-over of the French economy? Not much. 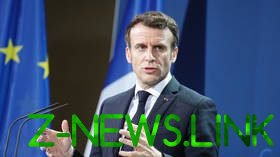 Likewise, in the run-up to the Ukraine conflict, Macron should have known better than to follow along with Washington’s dangerous game. He had every opportunity to adopt an independent stance amid Washington’s arming, training, and supporting of Ukraine and its brazenly anti-Russian stance that had already resulted in sanctioning the Russian-German Nord Stream 2 gas pipeline construction to the detriment of 40% of Europe’s gas supply.

As holder of the six-month rotating Council of Europe presidency, Macron sat on his hands and zipped his mouth as the EU attempted to crush Russia with sanctions, blocked Moscow’s foreign reserves, and cut it off from the global banking system. He then stood idly by while the EU quashed media outside of the heavily state-subsidized or corporate-consolidated press, thereby reducing the chance that light would be shined on the potential nefarious consequences for the French people of such actions.

Now, with Russia asking Europe to pay for gas in rubles in the wake of the financial difficulties imposed on it by the West, Macron has decided to react. He told Russian President Vladimir Putin in a phone call this week “that it was not possible for Western gas clients to pay their bills in roubles,” according to Reuters.

With Russian gas used in France for everything from industrial production to car fuel, Macron is now in a race against time. Will the French people re-elect him in April before or after they realize how badly Macron’s failure to stand up to America has effectively sanctioned French citizens? Earlier this week, Macron announced a proposal for “food vouchers to help the most modest households and the middle class families to cope with the additional costs” due to sanctions and war-related inflation of food and gas costs. 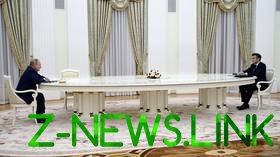 What’s next? Bread lines and rationing? These sanctions clearly don’t benefit the French people, so why did Macron not dial down the belligerence by standing up to Washington when it was cheerleading Ukrainians as proxies for its anti-Russian belligerence? He should have known from the submarine deal screw-over that Washington is always looking out for itself, even if it’s to the detriment of Europe.

It’s still not too late for Macron to make his mark on history in the way that de Gaulle did. He could publicly call on the EU to drop all Russian sanctions in light of the harm they are causing his own citizens and industry, and push Ukraine and Russia together to work out their issues while refusing to support or encourage any further NATO belligerence or interference. Doing so would represent a truly courageous and independent stance by Macron in favor of peace, French leadership, and European independence at a time when the world needs it most.