Home / WORLD / France ‘will not back down’ from sanctioning unvaccinated care-workers; Covid boosters to be offered to elderly from September

France ‘will not back down’ from sanctioning unvaccinated care-workers; Covid boosters to be offered to elderly from September 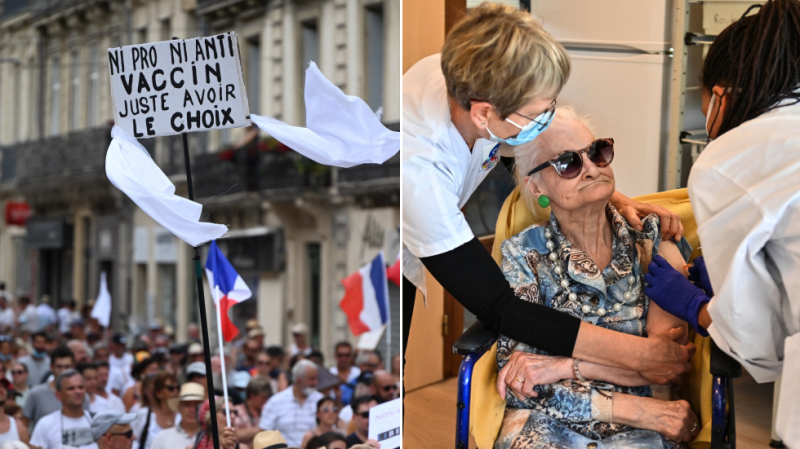 Speaking to French media outlet RTL on Thursday, Prime Minister Jean Castex clarified the dates for the next phase of the country’s vaccination campaign, which is poised to launch next month for “the most vulnerable members” of the public.

The drive will start with members of the population aged 65 and over from the beginning of September. Eligible senior citizens must have received their second dose over six months ago. Care-home residents will be next in line to receive a third shot from September 12-13.

Castex’s announcement comes after France’s medical watchdog ruled on Tuesday in favor of administering a booster shot to those at a greater risk of more severe symptoms of the coronavirus. The prime minister defended the move, stating that people are “eight times less likely to be contaminated, eleven times less [likely] to go to the hospital” if vaccinated against Covid-19.

Despite weeks of protests across the country against the implementation of a Covid ‘health pass’ and mandatory vaccination for workers in certain sectors, Castex stood firm, saying the government “will not back down” and will impose sanctions against caregivers who are unvaccinated past the September 15 deadline.

Serbia and Hungary rolled out booster shots to their populations earlier this month, while Israel began offering a third shot to people over 60 at the end of July, and has been rapidly reducing the eligible age throughout August.

World Health Organization Director General Tedros Adhanom Ghebreyesus reiterated on Monday that high-income countries should pause the offer of third Covid shots, saying that the vaccines should instead be prioritized for countries that have vaccinated only 1 to 2% of their population.