Home / WORLD / France okays dumbest ideas from the left, bans dumbest from the right – and complains US wokeness threatens its values

France okays dumbest ideas from the left, bans dumbest from the right – and complains US wokeness threatens its values 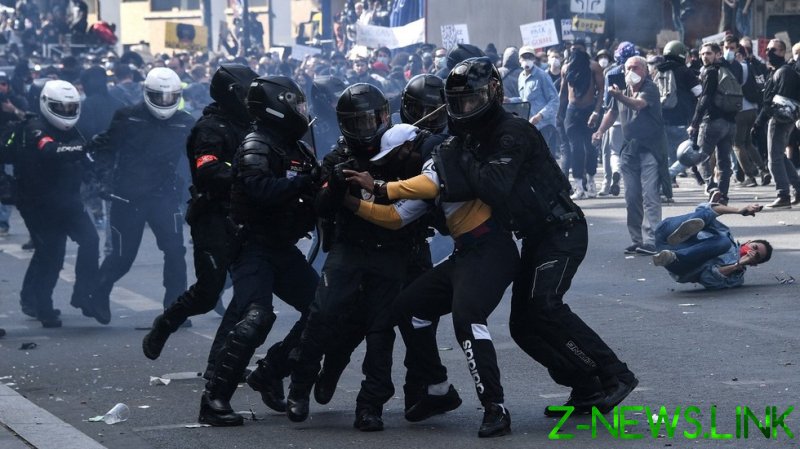 “Will American Ideas Tear France Apart?”asks the New York Times in an article, published earlier this month, quoting prominent intellectuals concerned about the impact of theories on gender, race and post-colonialism on French solidarity.

French President Emmanuel Macron has led a complete volte-face in France against the notion of “separatism” – to the point of introducing a new law in its name. “Separatism” is really just a euphemism for stamping out Islamist extremism that threatens French unity. And now, apparently, Macron and the rest of the French establishment are also realizing that other forms of ideological extremism, emanating from the left, also represent a threat to French national identity.

In a speech last October, Macron took issue with “certain social science theories entirely imported from the United States, with their problems,” and cited “stepping up dialogue, academic and scientific debate” as a solution to better understanding issues like those involving Islam.

Yet, is France truly ready to allow fully free speech on university campuses in the public sphere? That’s the real question.

Macron is now asking that university campuses become what they always should have been: laboratories for free speech. ALL speech.

In reality, they’ve never been that. Instead, they’ve served to police thought and to snuff out any diversity of ideas that don’t fall within a certain range on the left of the political spectrum. As someone who taught at one of the most elite French universities for several years, it was obvious that diversity was encouraged in every manner except when it came to openly promoting any ideas on the right, and especially ideas that could be considered extreme right, which were routinely marginalized.

One might think that banning discussion of extreme right thought is just fine while allowing any and all manner of leftist extremist speech free reign. Both of these things are equal, yet universities treat them entirely differently. All manner of extreme speech should be permitted on university campuses.

As a result, the snowflakes who emerge from universities are poorly equipped to argue against speech with which they disagree. Instead, they demand society’s protection from arguments that “trigger” them, claiming essentially that free speech running counter to their own is a form of trauma. The end result of this process? Ultimately, society grows dumber and more brainwashed.

France has taken this gatekeeping of speech to a level that the US speech police could only dream about. If Macron wants to make any inroads at all in countering the woke culture that dominates debate on both university campuses and the public domain, he needs to start with a change in the French law.

Public figures on the right side of the political spectrum have a tendency to self-censor in expressing their ideas because they know full well that the slightest misstep can cause one of the many leftist activist organizations to demand criminal proceedings against the offender for wrongful speech. France has long criminalized free speech.

Far-right National Rally party leader, Marine Le Pen, is currently in front of the French courts – potentially facing three years in prison and a €75,000 fine – for merely having posted on social media photos of horrors perpetrated by Islamic State terrorists in 2015. The charge against her? “Dissemination of a violent message likely to seriously undermine human dignity, likely to be seen by a minor.”

The Le Pen case is a sort of libel chill that effectively protects the most brutal terrorists from full public airing of their atrocities, and serves as a deterrent to anyone else wanting to follow in her footsteps.

Various French personalities ranging from actress Brigitte Bardot to journalist Eric Zemmour have been criminally convicted – five times in the case of Bardot – for speech that the French state qualifies as criminal hatred.

Yet, Macron thinks that the chilling effect on free and open debate and dialogue in France comes from American universities? How about starting with sweeping in front of France’s doorstep and seeing how that goes? All French laws that risk defining public debate of all kinds as “hate” should be scrapped. Because right now, diversity in France exists in every manner except in the realm of ideas. An entire segment of the political spectrum is frozen out. Only true free speech that includes having to entertain those ideas that disturb or even disgust us can lead to true diversity.