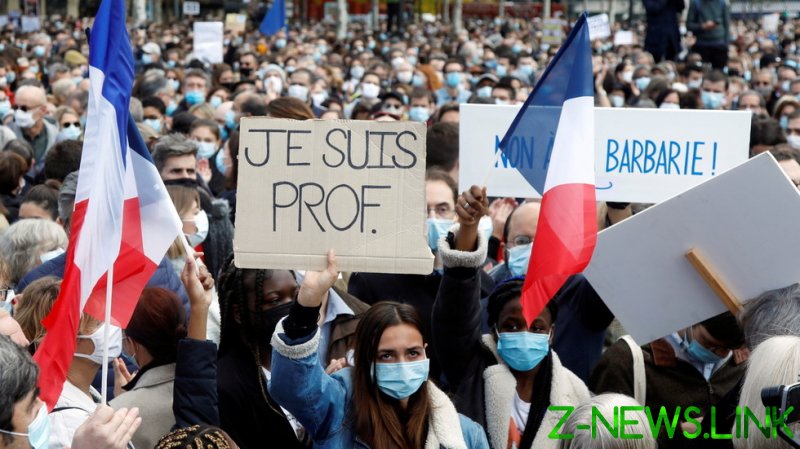 Central Paris was flooded with people as thousands gathered at the Place de la Republique to pay homage to Samuel Paty, a teacher from the neighboring town of Conflans-Sainte-Honorine, who was killed earlier this week after showing cartoons of Islamic prophet Mohammed during a lesson.

Government officials, including Prime Minister Jean Castex, as well as Paris Mayor Anne Hidalgo and the head of the Ile-de-France region, Valerie Pecresse, attended the commemorative event at the Place de la Republique. They were joined by crowds of ordinary people.

“You don’t scare us. We are not afraid. You will not divide us. We are France!” Castex wrote on Twitter, posting a video showing the rally. People who gathered at the square held a minute of silence in memory of Paty, which culminated in applause. At one point the crowd, which almost completely filled the square, was seen singing the French national anthem, ‘La Marseillaise’.

The demonstrators were holding placards bearing photos of the slain teacher, as well as slogans including ‘Je suis Samuel’ (I am Samuel), ‘Je suis enseignant’ (I am a teacher) and ‘Je suis Charlie’ – an apparent reference to the fact that the cartoons Paty showed his class were reportedly the notorious caricatures published by French satirical magazine Charlie Hebdo, which itself was targeted in another terror attack back in 2015, during which 12 people were killed.

The hashtags #JeSuisSamuel, #jesuisprof and #JeSuisEnseignant also began trending on Twitter. Commemorative rallies were held in many other cities across France, including Orleans, Toulouse, Lyon and Grenoble, where large crowds of people gathered near the mayoral offices.

Paty, 47, was murdered on Friday by an 18-year-old man, identified as an ethnic Chechen born in Moscow. The attacker had lived with his family in France as a refugee since he was six. He was killed by police after a brief chase. According to the posts on a now-deleted social media account that allegedly belonged to the assailant, the attack was in retaliation for what he called an insult to Islam.

The cartoons Paty showed in class also sparked a wave of indignation among some Muslim parents, with one of them even launching an online campaign to demand the teacher be fired. The complaint was further amplified by a local mosque, which shared the video with its sixty thousand followers on Facebook.

Police have detained 11 people in relation to the case, including four of the attacker’s relatives, as well as the parent who launched a campaign against the teacher, and some of his acquaintances.