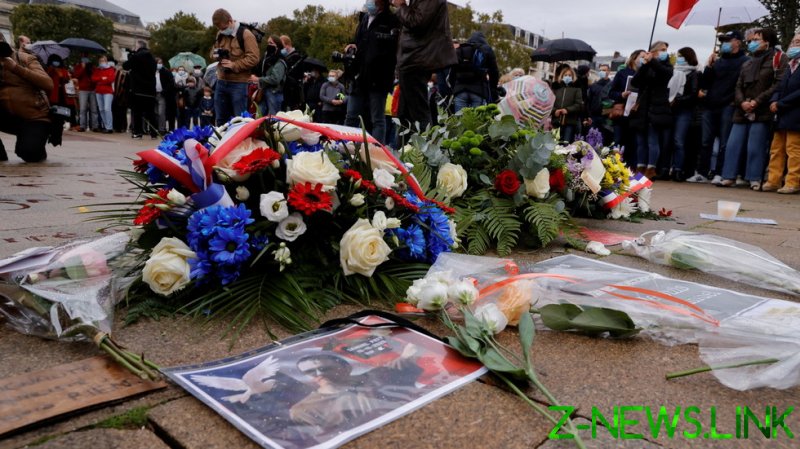 “Arrests have been made since Sunday. Police operations have been underway since this morning, and will continue. There are very numerous and concern dozens of individuals,” Darmanin told Europe 1 radio on Monday. The authorities have launched more than 80 probes into the spread of hate online, he said.

Never has the government mobilized so many resources to fight Islamism on social media.

Darmanin said that around 50 Muslim groups will be inspected by the authorities this week. “Several of them, as per my proposal according to the president’s request, will be dissolved by the Council of Ministers.”

One of the groups in the crosshairs is the Collective Against Islamophobia in France (CCIF), a human rights NGO chronicling attacks on Muslims, according to its website. Darmanin linked the group to the parent who had “launched a ‘fatwa’ against the teacher.”

The minister said he will also ask for another Muslim NGO, BarakaCity, to be dissolved. Its founder, Idriss Sihamedi, was detained last week following an online harassment complaint by a media columnist.

A history and geography teacher, Paty was beheaded on October 16 for showing his class a cartoon of the Prophet Mohammed as part of a lesson on freedom of expression. The suspect, an 18-year-old Chechen refugee, was shot dead in a standoff with police. The gruesome case sparked widespread outrage and massive demonstrations, with people carrying signs reading “I am Samuel” and “I am a teacher.”

Before Paty’s murder, a man claiming to be the parent of one of his students posted a video on social media in which he called the teacher a “thug” and said that he had filed a complaint against him. The man was later arrested along with several others, including the suspect’s relatives.

Journalist Zineb El Rhazoui accused the CCIF of participating in a “harassment campaign” against the slain teacher, and similar allegations were made by lawmaker Aurore Berge. The CCIF rejected these allegations as “false,” denying any ties to the case.

BarakaCity head Sihamedi, meanwhile, said that the dissolution of the group cannot happen “in the snap of a finger,” and would be “illegal,” because Darmanin is “not a king in an absolute monarchy.”