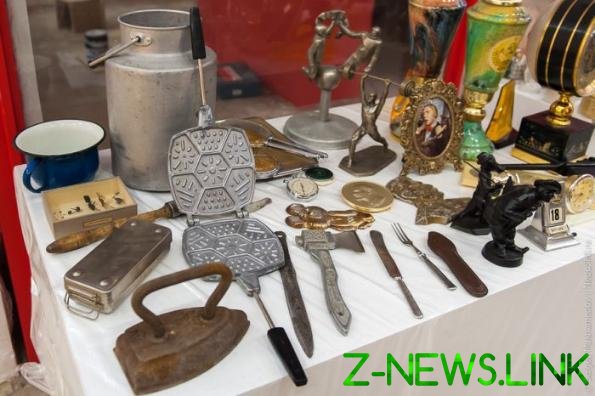 Flea markets are everywhere. People love to delve into the different small knick-knacks left over from bygone eras. As a rule, the counters of such markets or shops littered with unnecessary but extremely cute eclectic. All very lush, long want to look at. The flea market you can go for a long time not to buy something, but just not having the strength to break away from all this exuberant colors and shapes of all these endless in its variety of artifacts of everyday life of the past. And only one flea market or antique shop produces depressingly boring impression store the little things in life surrounded the Soviet man. Overall impression: very poorly, very dull and depressingly ugly. And not something to do all the ugly, sometimes come across unexpected things. But in General – like a Bank with some underground Northern nondescript insects. What I? Yes, that accidentally I got on the Internet promotional video of the Moscow store that sells Soviet antiquities. Couldn’t resist and watched the video. Well, that’s inspired. So, I’ll share some impressions. 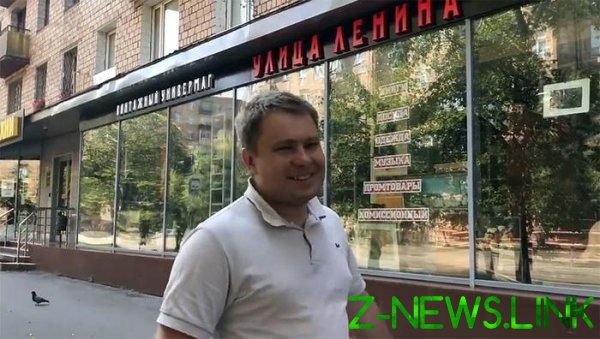 This is the front of the store. Called the “Vintage Department store, Lenin street”. Decorated in a classic style Department stores Brezhnev times. By the way, I suddenly just realized why so dull and ugly shaped by Soviet stores. Yes, just to cause passers-by all sorts of emotions, but not the desire to log in and make a purchase. However, we go in. 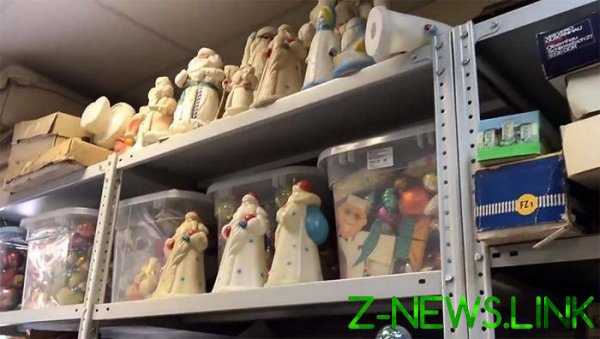 White gray plastic and faded small spots of red hats and blue bags with blue rims of Subic. In a transparent box – the same faded Soviet Christmas balls and other toys. Only the bright blue box from the transformer Gdrovsky railway PIKO – I, by the way, was this – that animates this shelf. And on the box of the transformer, by the way, the box of the German lodges for the railroad. And again – these houses was a passion of my childhood. And in contrast to these bright boxes to the left of the German milestone of the Soviet model box toy – light brown rough cardboard, perhaps with some lettering on top of lid.

Just below the several shelves with the Soviet toys. 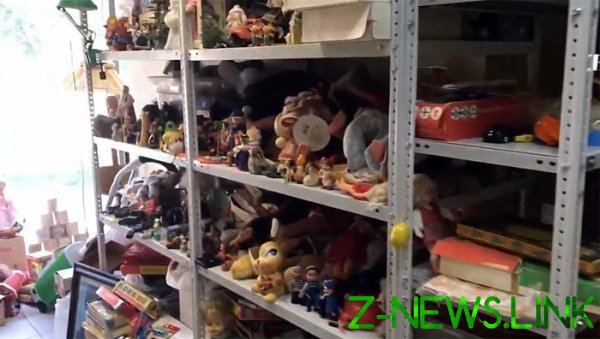 Bottom right are three sea wolf in a blue jacket and the vest. This is not the Soviet toys, it’s toys out of some socialist countries, too, like from the GDR. I again do not forget to note this fact – was a sailor. Clothes and cap he had from a fabric, the figure – made of soft plastic. A Soviet toy a little further away. They immediately recognized the minimalism of form and poor range of color. I again repeat, that at flea markets usually attracts the attention of vintage small figurines and toys in any particular burlesque of fine detail and color. But with the Soviet toys everything is exactly the opposite. There is nothing to look at. Threw a quick glance and saw this figure all in all its small details. By the way, to the right, a little closed boxes, leaned against the shelf doll from the GDR. Again, once known by a more refined performance. 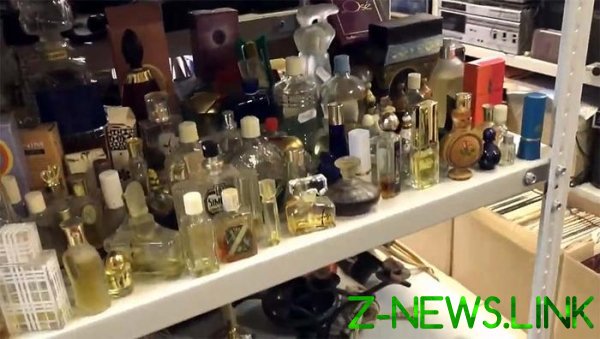 It is easy to see that almost all of the bubbles from imported spirits. A Soviet bubble, as a rule, followed the precepts of Ilyich in terms of minimalism. You need a bottle for perfume or toilet water? So take regular readings of vodka, make it a little muddy, a little make cuts sikos-obliquely or splashlite, make a neck with a twist and a plain white plastic cap. For the Soviet people will do. 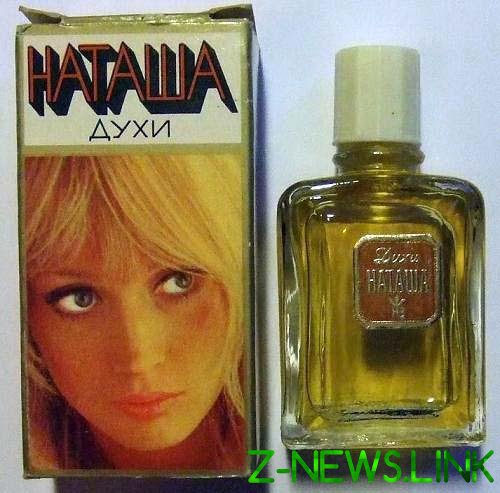 And if you do the red cap and red label in them wow! 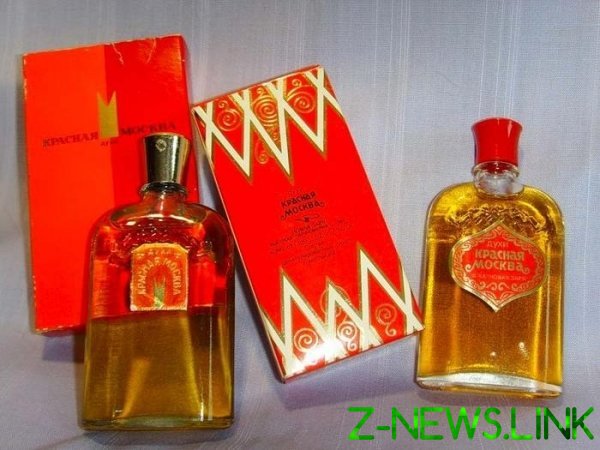 Moving further along this Vale of sorrow. Interior decoration. 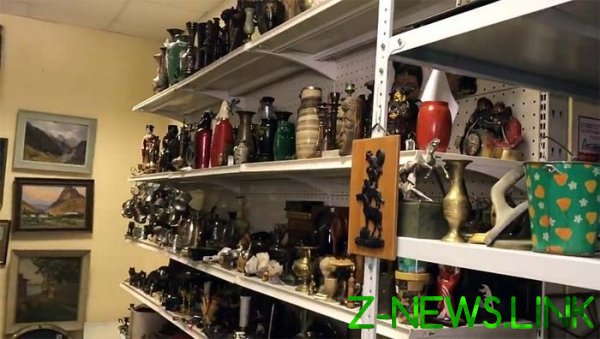 Monotonous vases. Siphons (by the way, the colored siphons appeared to the 80-th, in the Brezhnev-fashioned Scoop syphon was glass in the braid). Wall beauty “Bremen town musicians”. You would imagine that on a wall in the house of the hanged? And the Soviet people were hanged and believed that this heavily decorate their homes. And because the fact that actually decorated. In the foreground at the bottom, if not deceiving vision, intricate cups. Cups made technology a cunning build. The glass consists of two glasses – the interior of opaque plastic and the outer one transparent. And between them, continue paper color pictures. Overall by Soviet standards even cute. Landscape in the kitchen was revived. That, of course, who are able to buy. But even so Moore is not always able to buy, because they sold few places. What else is there? Horse rising on its hind legs of some figures. All, I note, are mostly gray or brown. No, by themselves, these shades are neither bad nor good. Just except when they are almost no other colors, it is somehow a little sad.

Here’s another piece of the same Department. 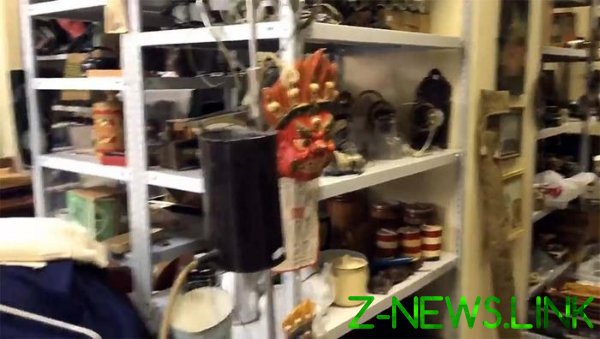 Sorry not very sharply. The only bright spot is colorful mask, brought from somewhere in some Vietnam some friends as a diplomat or business traveler, the Soviet people, who had this or something like this mask, Velma was glad. For home it immediately started playing with paints. Because in General the shelf in the Soviet housing looked like what is behind that mask.

There is another shelf with treasures. 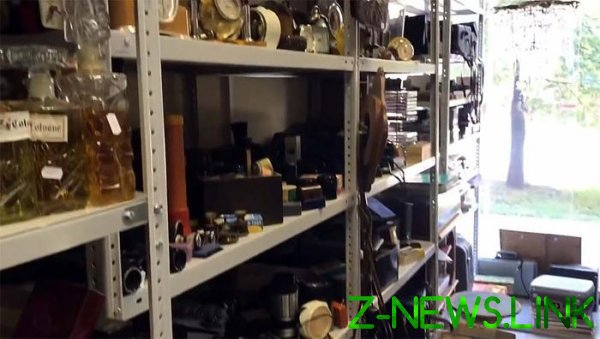 In the foreground as much as two or three beautiful decanter. The Countess, though not whiskey, as anyone would think, and Cologne. Cologne imported. Then during identified hours. A lot of them, but they look all the same type. This, incidentally, is different from the Soviet people – in their houses almost all the things were so similar that an alien, who would lead the Soviet one in housing, pumped the stuff in vodka that he fell asleep, and then moved to another home, I opened my eyes and would not understand that he’s already in another apartment. That is why, incidentally, the Soviet people were valued by the bright any little thing that somehow sets him apart from housing the millions. Well, like the previous mask from the alleged Vietnam.

The real richness of amber beads. 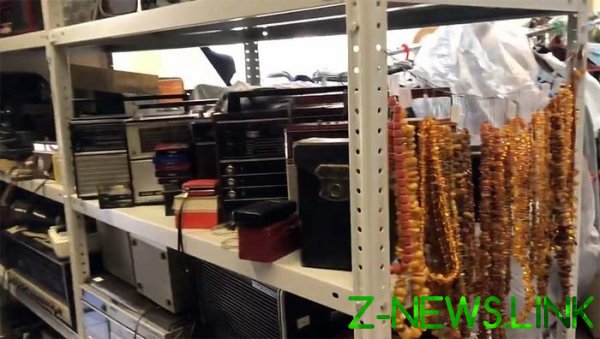 In the Brezhnev era amber beads were in fashion. And, by the way, as far as I remember, the deficit on them, at least in Moscow, was never. In any goods sold. Then there are radios. The last is, if I’m not mistaken, VEF-202, same as we were at home in the kitchen. In the morning, I was listening to it the “Pionerskaya Zorka”. Becoming older, he began to hear “voices” and, of course, Seva Novgorodtseva. Below the receivers there is something unidentifiable. Some players and speakers. 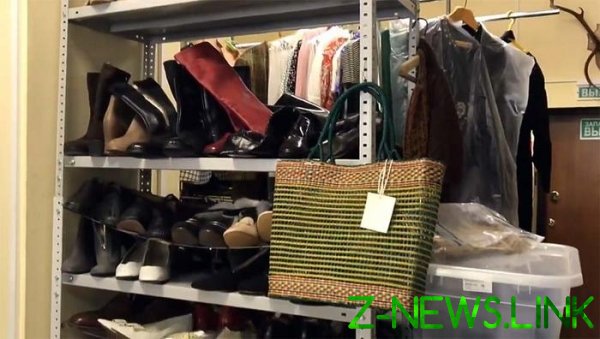 Well, it’s hard to say anything definite. Actually clothes and shoes the hardest to interpret at a distance of many decades. Why? Because for a man of the present, very noticeable unfashionable clothes or shoes, that is one that has cut three to five years ago, and even older. But after half a century, and even age, this difference is only noticeable to some historian mod. That is why, by the way, fans of Soviet antiquity today so delighted to share photos of the Soviet people, dressed in hopelessly outdated and unfashionable for its time thing, but modern fans think that the people in the photographs are dressed very fashionable. And make today themselves to dress in any crimson jacket or blouse with foam tabs on the shoulders, so once they were sad, and said that in this ugly street view goes only for big money. In General, a difficult thing to determine trendy vintage things. Which, moreover, does not attributed by years. So, for example, these red boots when I bought them, could be incredibly fashionable, and could be just the upper “collective-farm”, as they said. The same applies to other shiny galoshes. Except that near the wall are, it seems, suede blunt on a small platform womens boots. If this is the second half of the 70s or early 80s, it was normal, even fashionable. But everything else looks like, let’s say, not very. Well, except for the bags of course. With such a bag, probably, and today, another woman can walk the streets. 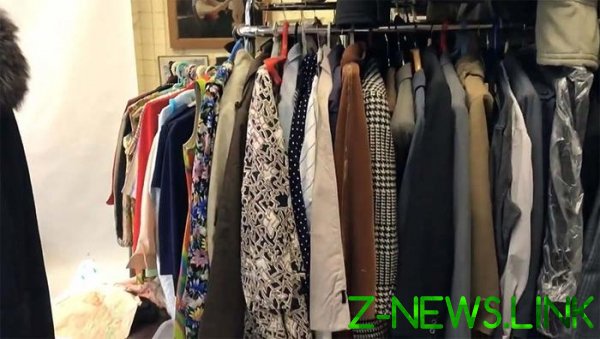 Well, there is nothing to disassemble. Besides the VoiceOver stated that it was not for sale and for rent wishing, for example for filming. 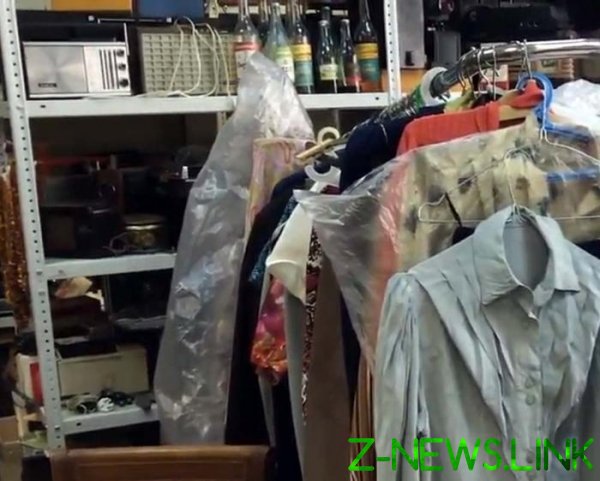 Well, again I lost, what can I say. The only thing we can say is that I was extremely doubtful that anyone will want to buy. Well, except that the bottles of alcohol in the background helped to buy for home of nostalgia with some very strong fan of the Soviet past. 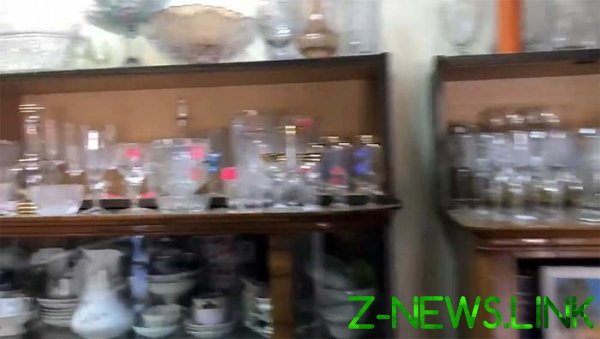 The picture is blurry, sorry. Well what can I say? Crystal the Soviet people always respected. Because crystal did the Soviet apartment more pretty. So always exhibited behind glass cases, polished sideboards. Every self-respecting Soviet mistress consider it my duty to make as many shelves crystal. Crystal, however, was very often not a crystal and regular cut glass, and not Bohemian. But from a distance nothing looked. Most often these crystals never used. He just stood there. And got it only on some special holidays. 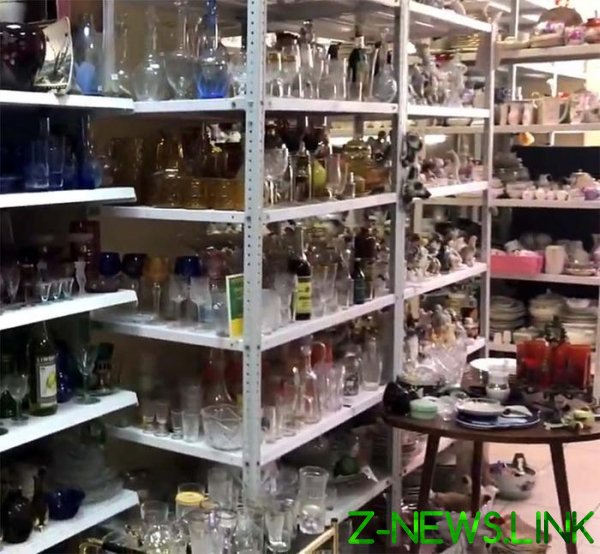 It is unclear why the owners put on the shelf a bottle of lemon vodka. It disturbs the harmony of nature. 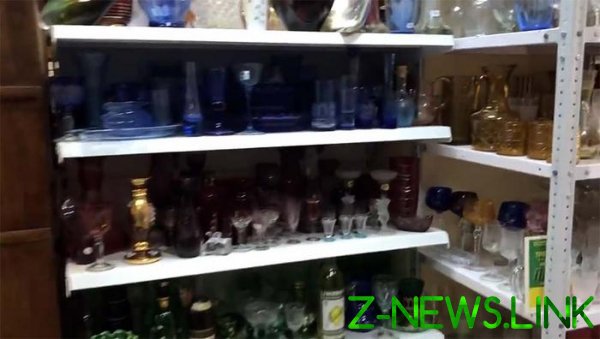 This kind of thing should not cheap. Judging by the fact that in the Moscow shops this kind of dishes always sold without any queue. And while I have never seen anyone of such things bought. I when the grandmother went to visit, then it is in front of the house was a shop “Porcelain-Crystal” or something was the name. And my mom always went there to admire all this beauty. The store was at the stop street Petra-Alekseeva, as I remember. 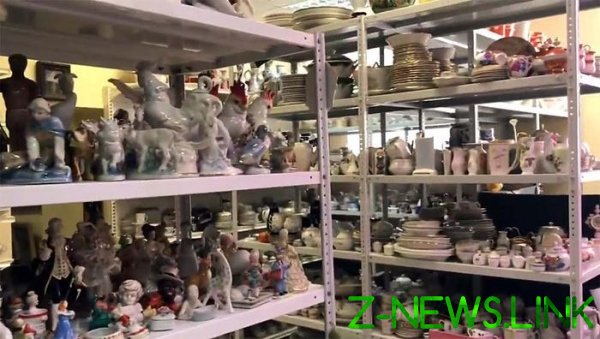 It’s on the stand again, the Soviet production mixed with imports, Gdovskii in the first place. By the way, riding dreams of a Soviet housewife could buy Gdowski service “Madonna” (if I’m not mistaken the name). Here it is in pictures: 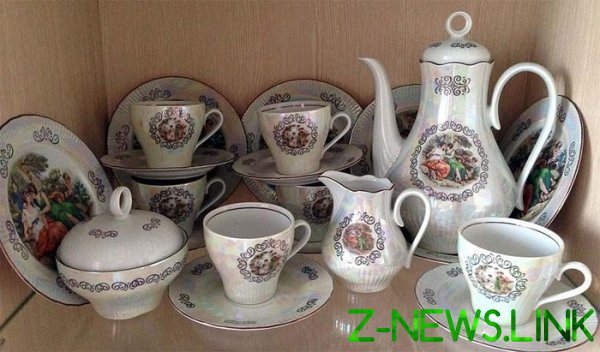 Though on this photo the only part of this set. But in full force it was almost for 12 persons and consists of a set of 10500 items. Wildly expensive. In the Moscow newspaper “Evening Moscow”, or rather in its advertising application, regularly published announcements that someone wants to buy and someone wants to sell this beautiful set. And I thought when I read those ads – well, why do these people not realize to read the paper and to dock with each other?

And porcelain and other earthenware. 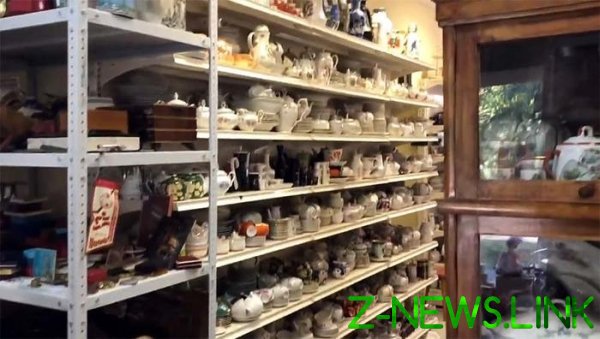 Rack with different angle. Along with some more or less exquisite things, and to discern the model of the Soviet Cup saucer.

End of the demonstration. What can I say? Someone may see this abundance, will want to go to this “vintage Department store” and see with your own eyes, or buy yourself some a Cup or a plastic Santa Claus. Well, so I made this store is small. Pus people doing their small business. But personally to me this shop did not pull in the slightest degree. I’ve been there already. And today, when I see these stores of these fragments of the Soviet civilization, every time I rejoice that all this is gone forever. And every time I wonder – where in our time come from people who sincerely want to return to the Soviet misery.