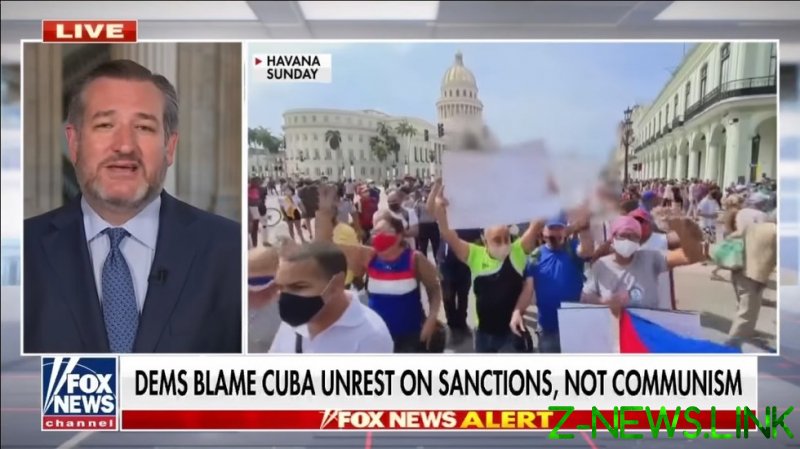 After opponents of the Cuban government staged mass protests last week, the unrest became a focus of national news in the US. Texas Senator Ted Cruz, who comes from a family of Cuban refugees and counts many Cuban exiles among his supporters who come from Florida, minced no words in denouncing the evils of communism and dunking on the Democrats, who would argue that the US was contributing to the hardships of the Cuban people by maintaining its decades-old blockade of the island nation.

His Tuesday appearance on Fox News, however, included a small detail that went largely unnoticed. As he was speaking about “brutal oppression” by the Cuban government and hailing the protesters, the footage shown by the cable station depicted a rally by Cuban government supporters. Fox News apparently knew exactly what it was airing, since it was careful to blur the slogans that some of the activists were carrying.

Some eagle-eyed viewers caught the inconsistency. The same footage – but with the slogans clearly visible – can be seen, for example, in a Deutsche Welle report on the situation in Cuba. Demonstrators declaring that “the streets belong to the revolutionaries” are probably not the kind of Cuban protesters that Senator Cruz had in mind.

“There were anti-government protests. Why are you doing this? Why did you go out of your way to lie?” wondered a TikTok user, who highlighted the Fox News gaffe.

Fox News is by no means the only Western news outlet to misrepresent images shown in its coverage of the Cuban protests. Quite a few used a photo of a pro-government rally at the Maximo Gomez monument in Havana, which was erroneously captioned by AP as an anti-government event. Fox News was among those who used the misleading image, including in another interview with Cruz.

Meanwhile, CNN showed a photo of a protest in Miami, implying that the event actually happened in Cuba itself.

The mass anti-government demonstrations in Cuba were launched last Saturday over the economic hardships experienced by the people of the island nations. Supporters of the Cuban government responded by staging large rallies of their own, which may explain some of the media confusion in the West.

Cuban President Miguel Diaz-Canel blasted the foreign coverage of the events in his country, saying the scale of the dissent against his leadership was exaggerated and accusing foreign news sources of “media terrorism” against Cuba.

Some other countries, including Russia, voiced their skepticism about what was happening. Moscow directly accused the US government of orchestrating a campaign to destabilize the Cuban government.