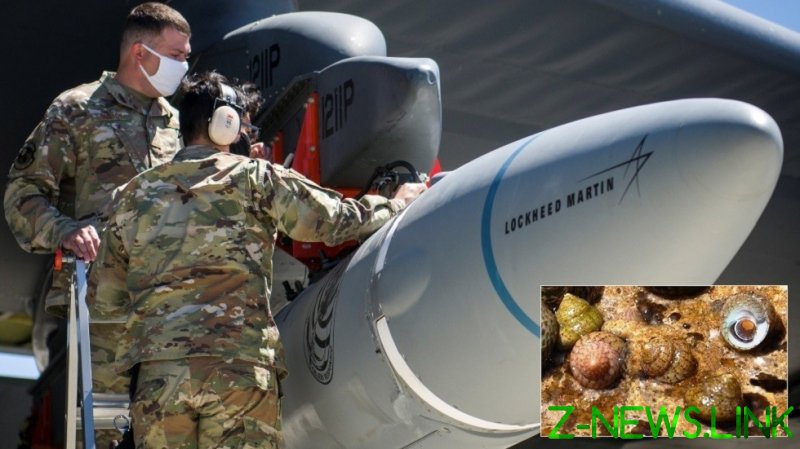 The Air-launched Rapid Response Weapon (ARRW) test may finally take place next month after a previous failed attempt, Gen. Timothy M. Ray, head of Global Strike Command, said in early June. And those paying the price will not only be the American taxpayers, but also the marine life of the Kwajalein Atoll in the Republic of the Marshall Islands, where the test vehicle is going to conclude its flight.

The atoll is home to many rare species, but an environmental assessment that was recently released by the US Air Force Nuclear Weapons Center at Kirtland Air Force Base insisted that the test won’t cause irreversible damage to them.

“Up to four top shell snails may be killed by the proposed action, and up to 90 clams,” the documents said, adding that the impact could occur on both land and in water.

Other species would likely be affected more harshly. The ARRW firing could lead to “complete mortality” of more than 10,000 coral colonies at the Kwajalein Atoll, the documents said. They also warned that 108 humphead wrasses, which are an endangered fish species, “could be injured or killed.”

When it comes to hypersonic weapons, the US is lagging behind Russia, which apparently became the first nation in the world to put such a system in service after the introduction of the Avangard glide vehicle in 2019. So, cancellation of the first live-fire flight test of the AGM-183A ARRW in April due to unspecified problems on its B-52H bomber carrier aircraft became a major disappointment for the Pentagon.

The environmental assessment mentioned shock waves caused by the direct impact from test payload, which can travel long distances in the water, as the main reason for concern. However, it pointed out that due to their shells, “shock waves are expected to have insignificant effects to top shell snails and giant clams.”

It listed other “stressors” that the sea creatures could experience due to the missile testing, including extreme noise levels, exposure to hazardous materials, disturbance caused by human activity or equipment and long-term presence of manmade objects in the water.

The report concluded that the ARRW tests and other US military activities under the Ground Based Strategic Deterrent (GBSD) program “would not have a significant impact on the natural or human environment.”

The Air Force didn’t provide any estimates on the possible loss of human life if a nuclear-capable hypersonic weapon is ever used against another country.