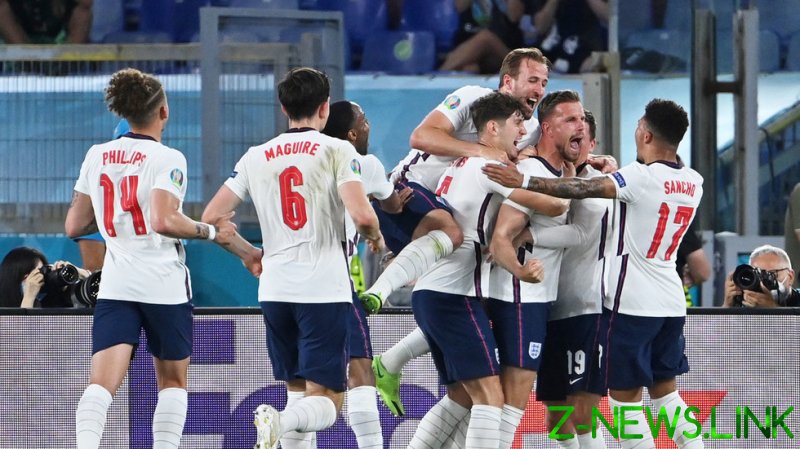 “Football’s coming home” is a refrain often sung in knowing self-defeatism, but England are at least now returning to Wembley for a first European Championship semi-final since 1996 after blowing away Ukraine at the start of each half at the Stadio Olimpico.

Continuing to put aside his early tournament woes, Harry Kane opened the scoring with a fourth-minute strike when he latched onto an eye-of-a-needle pass from Raheem Sterling, toe-poking the ball past Heorhiy Bushchan in the Ukraine goal.

England struck even earlier at the start of the second half, this time when Harry Maguire headed in a pinpoint delivery from Manchester United teammate Luke Shaw in the 46th minute.

It was Shaw’s excellent service which was again the key four minutes later when he provided a cross for Kane to head between Bushchan’s legs to kill the game.

More suspect Ukrainian defending at set-pieces was to blame when England substitute Jordan Henderson found space to head in unmarked in the 63rd minute to complete the rout and register his first ever goal for the Three Lions.

This kind of comfort does not come easy to England at major tournaments, but Gareth Southgate’s men rode out some ropey first-half moments to nullify a sporadically dangerous but tired-looking Ukraine team with a performance that stands them out as real contenders this time round.

Denmark will be no pushovers at Wembley on Wednesday and the Danes again proved their own credentials with a hard-fought win over the Czech Republic earlier in the day, but England have no less momentum and boast a defence which is still to concede a goal at this summer’s tournament. 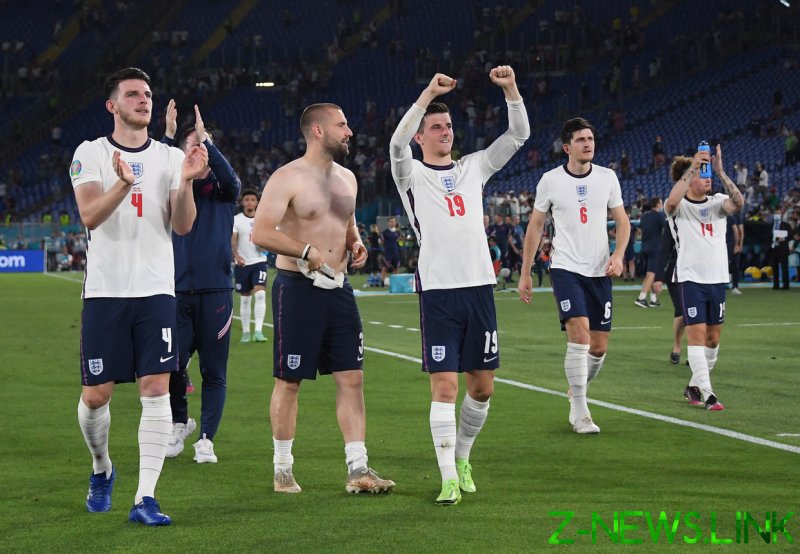 England players salute their fans after seeing off Ukraine. © Reuters

After the highs of their historic win over Germany at Wembley in the last round, things could not have started any better for England in Rome when the in-form Sterling threaded the ball through to Kane and the Tottenham forward shunted it beyond Bushchan.

It was the Three Lions’ earliest goal at the Euros since 2004 when Michael Owen needed just two minutes 25 seconds to score against Portugal in the quarter-finals, although any sense of it settling the nerves was perhaps ruined by the stats men soon noting that England had never won a previous European Championship game when going ahead in the opening four minutes, drawing twice and losing three times.

Ukraine enjoyed their best chance inside the first 20 minutes when the lively Roman Yaremchuk seized on a Kyle Walker mistake to charge down the left, firing off a low shot which Jordan Pickford palmed away at his near post.

Declan Rice tested Bushchan with a fierce drive from the edge of the box, but despite being unsighted the Ukrainian keeper managed to palm the effort away.

Already the walking wounded from their bruising last 16 encounter with Sweden, Ukraine lost a distraught Serhiy Kryvtsov to injury in the 36th minute when the defender limped off to be replaced by Viktor Tsygankov.

Not long afterwards, England wing ace Jadon Sancho should have marked his first start at the tournament with a goal when he rolled his man from a cross by Shaw, but sent his shot straight at Bushchan. The flag went up for offside against Shaw in the build-up, but a VAR review may well have vindicated the Manchester United wingback, had Sancho found the net.

While not bearing fruit, the move was a clear sign of Shaw’s growing influence on the game as he looked excellent whenever England probed down the left. 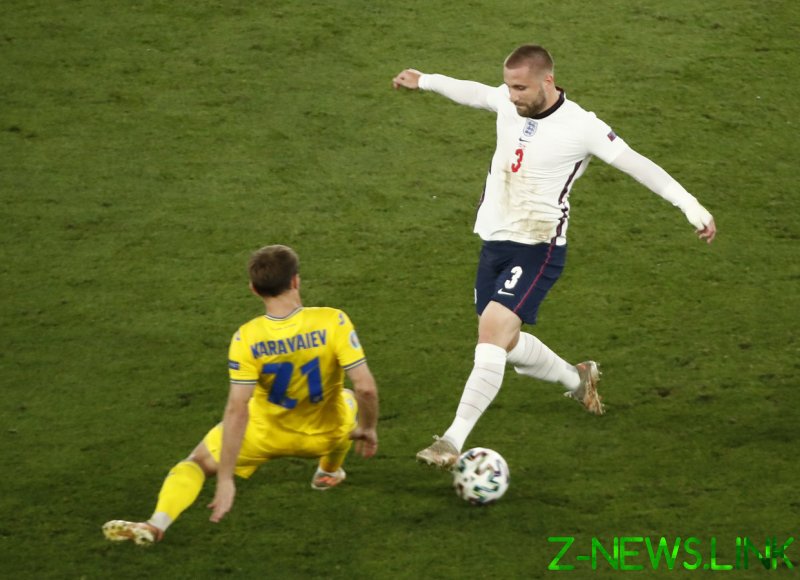 It was Ukraine, though, who finished the half stronger. Having switched to 4-3-3, the England defence looked sporadically disorganized, with Yaremchuk in particular making a nuisance of himself as Walker struggled to deal with the threat down England’s right flank.

The Three Lions ranks were also left scrambling to clear the lines when Mykola Shaparenko lashed a low volley just wide of the upright heading into half-time.

That Ukraine fight seemed to foretell a difficult second period in store for England, but the opening five minutes blew that narrative apart.

Just as they’d started the first half, England jumped out of the blocks. Kane won a free-kick on the left, and Maguire found space to head in a pinpoint delivery from Manchester United teammate Shaw.

England made it three in the 50th minute, and again it was the superb Shaw whose excellent service delivered it on a plate – this time for Kane to add his second when he took a sharp step back to lose his marker and head a cross downwards between Bushchan’s legs. 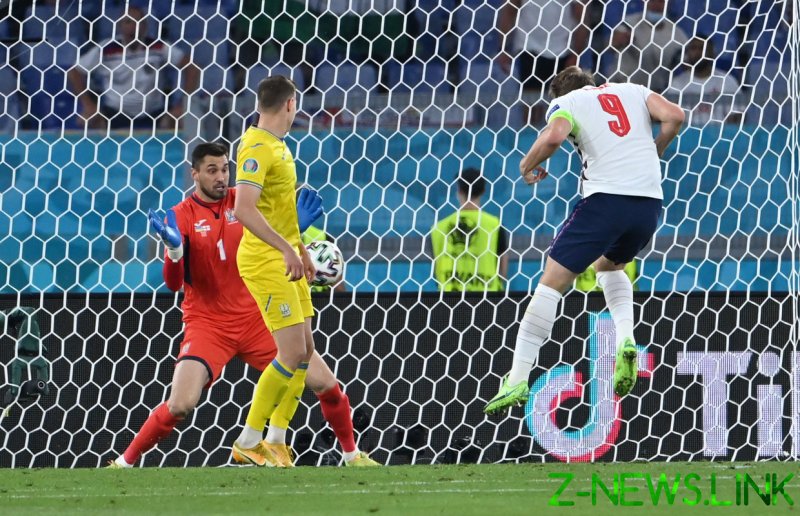 Kane headed in his second and England’s third.© Reuters

Former Manchester United manager Jose Mourinho had questioned Shaw’s set-piece deliveries earlier in the tournament, but the 25-year-old was producing his most important performance in an England shirt.

Kane almost had a hat-trick when he thundered a volley at Bushchan, but that was merely a stay of execution as substitute Henderson headed in from the ensuing corner after slipping his marker all too easily.

WEMBLEY DATE WITH DANES UP NEXT

By the end of the game, England fans were greeting every pass from their team with an ‘Ole’ as they pinged the ball around with the kind of game management on which Southgate has placed so much stock.

Mercifully for Ukraine’s weary legs, German referee Felix Brych did not add any injury time at the end of the game, putting them out of their misery despite the pride that Andriy Shevchenko’s men should feel at reaching their first-ever European Championship quarter-final. 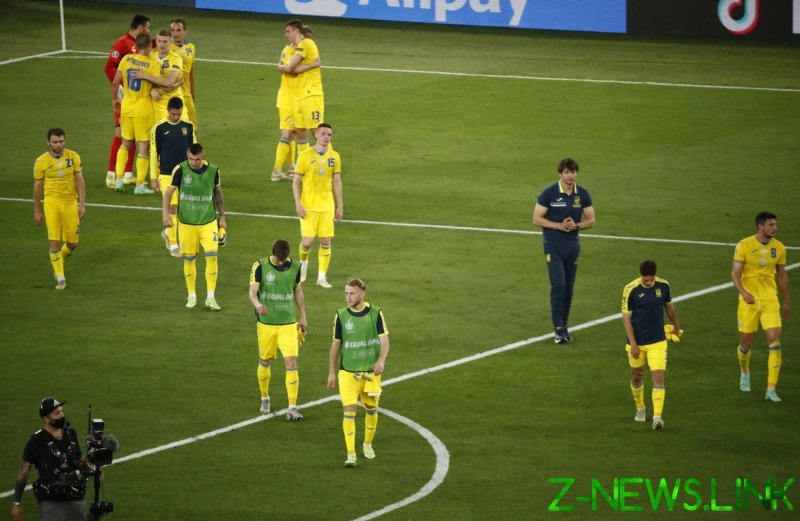 Ukraine saw their campaign come to an end. © Reuters

For England, a once-in-a-generation victory over Germany has now been followed by a consummate second-half performance in a quarter-final.

England teams have set themselves up for a fall so many times before that fans would do well to remain wary, but maybe – just maybe – this could be the summer when all those years of hurt are finally banished.