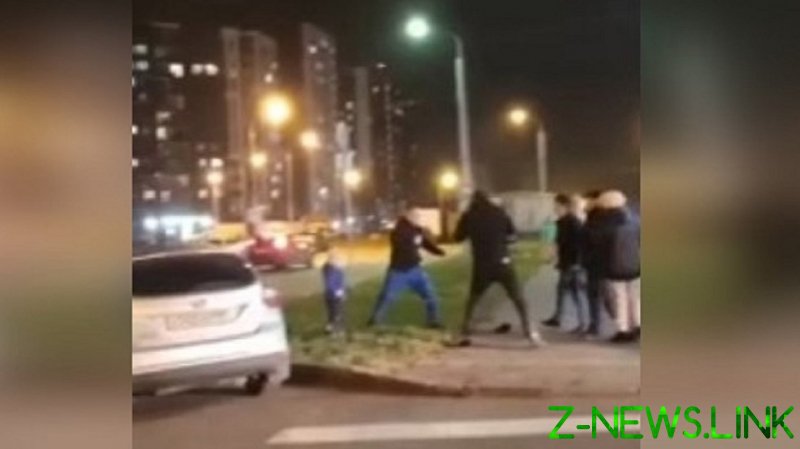 The suspects confronted two men on a street in southwestern Moscow earlier this week, despite one of the victims having his young son with him. Videos of the incident surfaced online on Friday, causing widespread public anger.

Footage that has since been examined and released by the Moscow Prosecutor’s Office shows the four attackers passing the two men at a crossing in the evening and then chasing them through the street. One of the men managed to escape while the other, who was carrying the small child on his shoulders, was not so lucky.

Another video published on social media shows the man being surrounded by the suspects, who attempt to hit and kick him as he tries to protect his son.

The attackers reportedly only fled when the second man returned with a group of locals. He told the police that he ran into a nearby store and asked for help in a bid to save his friend.

The father, who survived the ordeal, but had some visible bruises on his face, told the police he and his friend first encountered the four men in another store. They confronted his friend and then slapped the young boy in the face “for no apparent reason.” The friend said the men threatened them with a knife.

The two men decided to leave the store only to then run into the assailants at a street crossing.

The police launched a massive manhunt for the suspects amid reports that they were migrants. The incident stirred up tensions in the neighborhood and reportedly prompted locals to hold a gathering to discuss the situation.

All the suspects were detained within days. They are aged between 17 and 19, according to the police, who said three of them were Russian citizens and one is a citizen of a former Soviet Republic. Some media reports said three of the men got Russian passports some years ago and the fourth was from Azerbaijan.

The attackers were initially charged with hooliganism. Investigators later reclassified their actions as the attempted murder of two persons, including a minor, arguing that they posed a real threat to the “life and health of a small child.” On Sunday, a Moscow court placed all four suspects into custody until January 5.