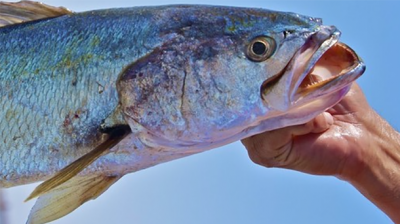 The frequency at which “yells” C. othonopterus, is dangerous to hearing the sea lions and dolphins, which are often noticed in close proximity to spawning grounds

Loud the noise from the fish Cynoscion othonopterus during spawning can disturb and even stun other marine animals.

C. othonopterus rare fish mating ritual to attract a female, the male emits a loud clicking sound, resembling, according to the researchers, the sound of machine gun fire. Every year in the Gulf of Mexico, to the mouth of the Colorado river for spawning come flocks of C. othonopterus, the total number of spawning fish has millions of individuals. The sound of the pack, comparable to the roar of the crowd of fans at the stadium.

The volume of this fish concert is enough to at least briefly stun marine mammals, sometimes prey on spawning C. othonopterus.

The frequency at which “yells” C. othonopterus, is dangerous to hearing the sea lions and dolphins, which are often noticed in close proximity to spawning grounds.

Perhaps the specialists on the protection of the environment will learn to use a loud cracking noise C. othonopterus in order to track and count fish in the muddy waters of the Gulf of Mexico. C. othonopterus — commercial fish, during spawning, catch it by the ton, and the environmentalists are already sounding the alarm — the species is named vulnerable. In order to effectively develop a strategy of protection of the species, scientists need to know how much more loud fish left in the ocean.