Fotozhaby on Bulk and sausages filled the Network

Policy on the shoulders of threw a bunch of sausage links.

At the Moscow airport “Domodedovo” was attacked by unknown Russian opposition leader Alexei Navalny with the bunch of sausage links.

According to him, the incident occurred when he came out of security to meet. 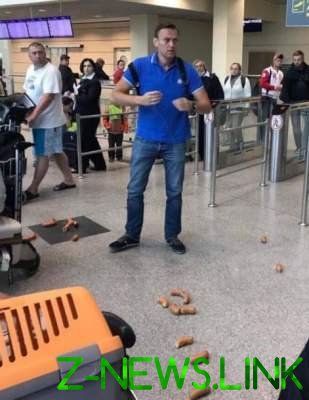 “You see – the camera shoots someone. Probably, I think, layfnyuz. They always shoot me. Right at the barrier for damsel: Alex, can you take a picture? Of course – I say – and you stop. At this point the back swooped three devils and throw me on the shoulders of a bunch of sausage links,” – said Navalny.

After that, the attackers fled, leaving all witnesses of the incident in disbelief.

“Standing next to the cops, smiling. The floor was littered with sausages,” he added.

The time of the attack on Navalny promptly published by the advocates of “life”.

Also, the network appeared a photo of the incident and the first photoshopped pics.