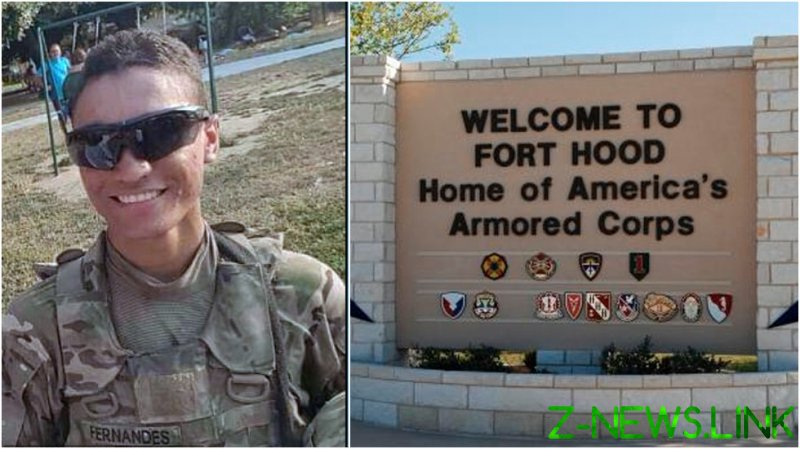 The 23-year-old sergeant, Elder Fernandes, was reported missing earlier this week, last seen by his staff sergeant on Monday at a residence near the Fort Hood Army base in Killeen, Texas, according to a local ABC affiliate. The military has now called on the public for any information they might have about the soldier, issuing an alert on social media on Friday.

“We are very concerned about the welfare of this soldier and first and foremost we want to ensure he is okay,” Christopher Grey, spokesperson for the Army’s Criminal Investigation Command (CID), said in a statement.

Fernandes – a chemical, biological, radiological, and nuclear specialist assigned to the Sustainment Brigade of the 1st Cavalry Division at Fort Hood – was brought to a residence in Killeen by his staff sergeant on Monday, but “did not report for work the following day as scheduled,” the Army said, noting that his only known vehicle remains at the base.

Prior to his disappearance, the sergeant filed an “abusive sexual contact report,”according to Lieutenant Colonel Chris Brautigam, a public affairs officer at the base. Brautigam said Fernandes was transferred to a different unit following the report, in part to ensure there were “no opportunities for reprisals,” though provided few other details.

A Massachusetts state representative, Liz Miranda (D), said Fernandes’s car was found with “all of his belongings” at the Fort Hood base, and that he had “recently signed a new lease and never picked up the keys to his apartment.” She added that the soldier’s mother had flown to Texas from his hometown in Brockton, Massachusetts to find her son.

Fernandes’ disappearance comes just weeks after military investigators identified the remains of Specialist Vanessa Guillén, 20, who went missing from Fort Hood in April. Her case triggered widespread calls from lawmakers for an independent probe into how the Army handled the investigation amid allegations the soldier was a victim of sexual harassment before her death, which authorities have deemed a murder.

Just 11 days after Guillén’s remains were discovered, Army Private Mejhor Morta was found “unresponsive” some 15 miles away from Fort Hood, dying of an unknown cause a short time later. After Guillén, he was the seventh soldier to die under mysterious circumstances near the base in 2020 alone, three from gunshot wounds. The skeletal remains of Private Gregory Morales, 24, were also discovered off-base in mid-June; foul play is suspected in his death, though little about the investigation has been made public.

Fort Hood was again thrust into the spotlight earlier this month after two soldiers stationed there, and another at a base in San Antonio, were arrested and charged in a child prostitution sting, in which the three men believed they were meeting with girls aged 15 or 16 in a town adjacent to Killeen. A similar sting operation in 2017 led to child prostitution charges for 13 Fort Hood soldiers, all active duty.