Home / WORLD / Former US marine surrenders to police after killing four, including baby in his mother’s arms

Former US marine surrenders to police after killing four, including baby in his mother’s arms 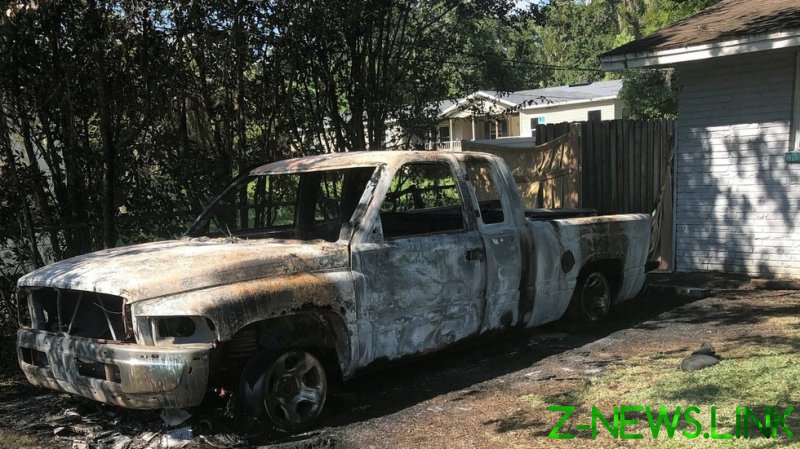 The murders occurred around 4:30 am on Sunday, and the victims included a man, two women and a baby boy who died in his mother’s arms, Polk County Sheriff Grady Judd told reporters. An 11-year-old girl also was shot multiple times but was expected to survive after being rushed to surgery.

I will never be able to unsee that mother laying there with her dead infant in her arms.

The shooter was identified as Bryan Riley, 33, a former Marine Corps sharp-shooter who had tours of duty in Iraq and Afghanistan. He surrendered after being wounded in a gun battle with deputies. Riley told deputies after his arrest that he was on methamphetamine, and he tried to wrestle a gun away from a Lakeland police officer while being treated at a hospital for his gunshot wound.

The suspect is a resident of Brandon, Florida – near Tampa – and is employed as a bodyguard. He also told deputies that his victims “begged for their lives, and I killed them anyway,” according to Judd. The sheriff called Riley “evil in the flesh, a rabid animal.” He also allegedly killed the family’s dog.

Riley’s girlfriend told investigators that he suffered from PTSD and depression. He first came in contact with the Polk County family on Saturday, when he allegedly told 40-year-old Justice Gleason, who was mowing his lawn, that God had given him a vision that his daughter “Amber” would commit suicide. Gleason, who had no daughter by that name, threatened to call police, but Riley reportedly said, “No need to call the cops, I’m the cops for God.”

On Saturday night, the sheriff’s office got a call from the Gleason residence reporting a suspicious person. The man, allegedly Riley, told a woman at the home, “God sent me here to speak with one of your daughters.” The man was gone when a deputy arrived, and his truck wasn’t found in a search of the area, Judd said.

Nine hours later, a sheriff’s lieutenant responding to a nearby call heard two volleys of automatic gunfire. Within seconds, the sheriff’s office began receiving calls reporting an active shooter. Deputies arrived to see a truck on fire and a man wearing body armor, though they didn’t spot a gun, Judd said. He ran back in the house, and deputies heard a volley of gunfire, followed by “a woman’s scream and a baby whimper,” the sheriff said.

A gun battle ensued, and despite as many as hundreds of shots being fired between deputies and the suspect, no law enforcement officers were injured, Judd said. The sheriff lamented that Riley came out of the house with his hands up and no gun.

“It would have been nice if he’d come out with a gun, and then we’d have been able to read a newspaper through him and we’d have had a different conversation here this morning,” Judd told reporters. “But when someone chooses to give up, we take them into custody peacefully.”

If he’d given us the opportunity, we’d have shot him up a lot, but he didn’t because he was a coward. You see, it’s easy to shoot innocent children and babies and people in the middle of the night when you’ve got the gun and they don’t. But he was not much of a man.

After Riley’s surrender, deputies discovered the injured girl and three deceased victims — including Justice Gleason, a 33-year-old woman and her three-month-old son – in the house. They found another victim, a 62-year-old woman, in another house on the property.

Gun control advocates quickly seized on the massacre as another example of the need for stricter firearms laws, while others suggested that the shooter wasn’t killed by law enforcement because he’s white. But Judd argued a different political lesson learned from the shootings.

“Our crime rate in this county is at a 49-year low . . ., but when you get a nut job like this, statistical data makes no difference,” the sheriff said. “I mean, this guy was wired up on dope, on meth — you know, what those people think is low-level, non-violent meth — here’s your sign, today, again, and he came here for a gun battle.”