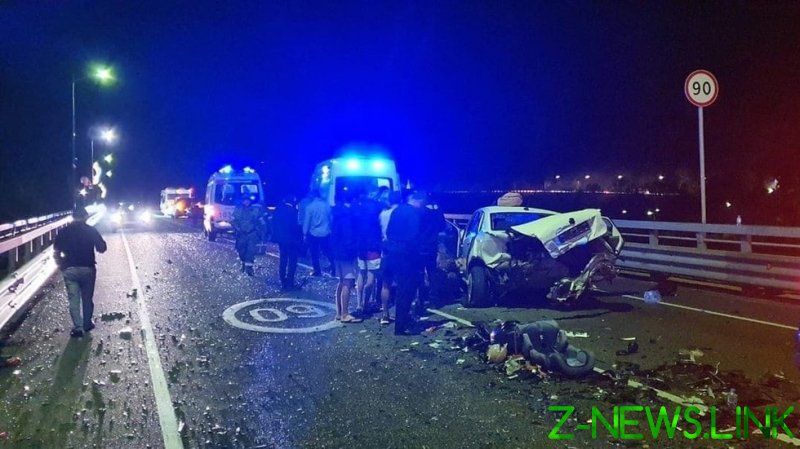 According to reports, a Mercedes carrying Sobchak and two of her associates collided head-on with another vehicle on a mountain road near the ski resort suburb of Krasnaya Polyana. The crash killed at least one woman and hospitalized two others. Following reports that the celebrity quickly got into another car and headed off to the airport, the same destination as her original ride was headed, she was accused of fleeing the scene.

Sobchak later revealed that she had suffered a concussion and internal bruising and quickly chose to leave in order to be with her son in Moscow.

However, many on the internet weren’t convinced and attacked her for making a quick getaway from the scene of a deadly incident, with hordes of twitter users branding her as “ruthless scum” and a “bitch,” among other insults.

The Mercedes driver, Oleg Tsoy, has already accepted guilt. Sobchak has also been called in by Sochi cops for interrogation.

Ksenia Sobchak is the daughter of the late Anatoly Sobchak, a former mayor of St. Petersburg whose deputy and right-hand man in the 1990s was Vladimir Putin. After graduating from university, she became the host of the popular reality television show Dom-2, before entering journalism and eventually running for president in 2018, where she came fourth with 1.7% of the vote.

According to Sobchak, she went home only after being told that doctors were on their way to the victims.

“I’m at home. I had a check-up with my assistant this afternoon. We both have a concussion,” she wrote on Telegram. “The reality is that I got into an accident, got hurt, got my head bashed in, and went to another car after my director told me that doctors were on their way.”

“I flew home to my family because I am not a rescuer, not a doctor, and not a driver, and I could not help them with my hands or advice. I can only help with connections and opportunities,” she continued, noting that if she stuck around, she would instead be accused of “staying at the scene and not doing a f**ing thing.”

“About the fakes involving me. I won’t even ask for decency as I know it’s useless,” Sobchak wrote. “I will not prove that I am not a fool to a gang of Apex spin doctors who have decided to make me the new Efremov.”