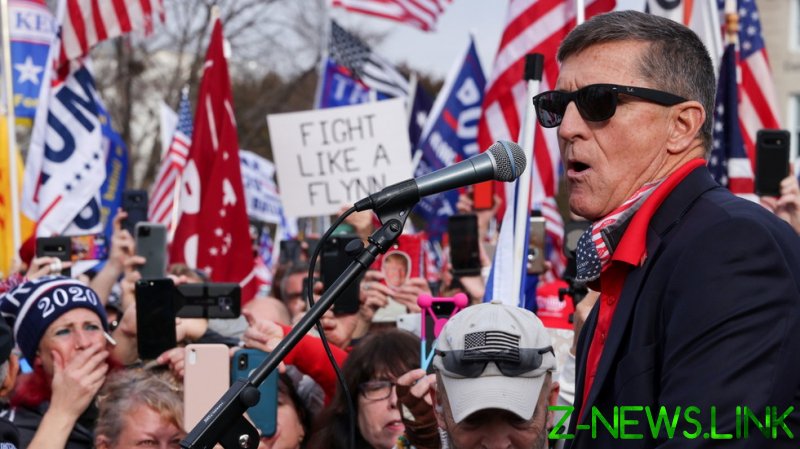 Speaking to a crowd of Trump supporters at an event called the ‘For God & Country Patriot Roundup’, Flynn was asked by an unidentified man “why what happened in Myanmar can’t happen here.”

A coup in February led to military chief Min Aung Hlaing being installed as Myanmar’s leader, and the months that have followed have seen hundreds of civilians killed in violent crackdowns. Thousands have fled the country to seek refuge.

At the Dallas conference, the mention of a military coup earned cheers from the crowd. Flynn responded that there is “no reason” it couldn’t happen in the US, even adding that “it should happen,” to which the crowd responded with cheers yet again.

Footage of Flynn’s seeming endorsement of a coup trended on social media, leading liberal critics to accuse the former national security advisor, who received a pardon from former President Donald Trump last year after pleading guilty to lying to the FBI over his contact with a Russian diplomat, of promoting violence and possibly war to put Trump back in office.

“The talk of war is very real,” journalist Justin Glawe tweeted when posting video of Flynn.

Some even suggested Flynn deserved legal consequences for his “seditious” rhetoric.

“Arrest Flynn – for advocating the violent overthrow of the government of the United States and working to attempt same,” liberal pundit Keith Olbermann tweeted, before suggesting that Flynn could also be “recalled” back into active military service and court-martialed.

Flynn has made it clear in the past that he believes the 2020 presidential election was fraudulent, though officials have found no proof of widespread fraud. He suggested in December that then-President Trump could use his “military capabilities” to “rerun” the election in swing states.