Home / WORLD / Forget Yellen’s promises… US inflation is out of control, and we could be heading back to the dark days of the 1970s

Forget Yellen’s promises… US inflation is out of control, and we could be heading back to the dark days of the 1970s 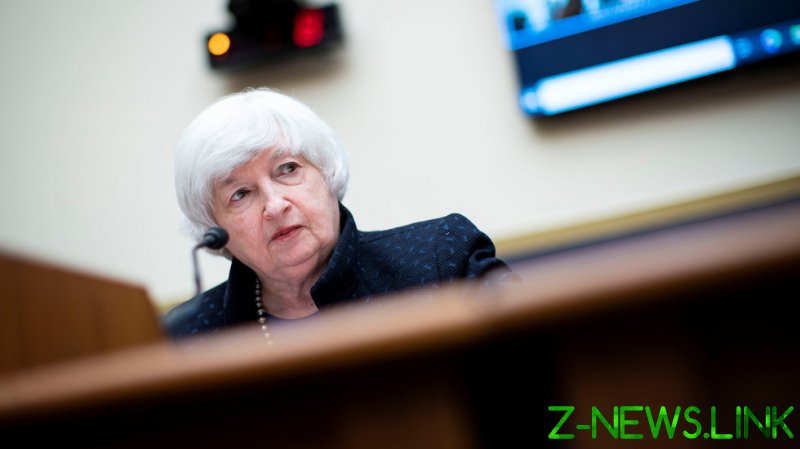 Secretary of the Treasury Janet Yellen promised this week that the United States’ inflation outlook remains under control. “I don’t think we’re about to lose control of inflation,” she told CNN.

What she didn’t say is that’s because it’s possible the Biden administration has already lost control of inflation, which is a scary thought.

Previously, Yellen promised us that inflation would end by the end of 2021, blaming price increases over the summer on the supply chain bottlenecks and shifting consumer demand as the country comes out of the pandemic.

Inflation has surged to levels not seen in 30 years, marking a decline in real income amongst ordinary Americans, who were already struggling to get back to normal after a year or more in lockdown.

Remember all those increases in state and city minimum wages, and the private bonuses paid to attract workers to come back after the pandemic?

Yeah? Not so fast. Those have been eaten up by higher prices already.

“But my expectation is that by the end of the year,” Yellen told reporters in early August as reassurance, “monthly [inflation] rates will come down to a pace consistent with the Fed’s interpretation of price stability,” which is around 2%.

And it’s not just Yellen who said that.

The legacy economists, who operate as a ways-and-means committee for the liberal establishment and always want to spend a little more of your money for your own good, also promised that inflation would moderate.

Inflation, they said, would be “transitory,” as if the word itself was a talisman against the huge amounts of paper money that have been shoved into the economy since the pandemic began, but mostly since Biden took over.

Yeah, not so fast on that too.

Because on every level – from the gas to get to grandma’s house, to the cars that take us there, to the tin foil pie pans, to the turkeys – this year’s Thanksgiving dinner is going to be the most costly ever, according to the New York Times.

And when the New York Times is frightened by inflation, you know something extraordinary is happening.

What’s so extraordinary about this, and scary as heck too, is that the country is currently standing on death watch as Democrats negotiate a social spending bill of massive proportions.

The death watch the Democrats are on is either for the Biden presidency, if they don’t get the massive social spending bills they want, or for the economy if they do.

And depending on what happens, it threatens to turn a sad Thanksgiving story into a frightening Halloween story that could move inflation from numbers that are now historically high to inflation that is historic.

Now measure that against the current 5% inflation that has you cussing out the gas pump and suddenly realizing that frozen cauliflower florets are also part of the supply chain and subject to higher prices and shortages.

Then multiply that by Christmas.

Yeah, that happened kind of fast, didn’t it?

Because that’s the problem with inflation. Like war, historic inflation usually rears its head when least expected, when the country can least withstand it, and when all the experts have been saying: “What? Me, worry?”

And it never ends well.

“Over the nearly two decades it lasted,” says the Federal Reserve history site, “the global monetary system established during World War II was abandoned, there were four economic recessions, two severe energy shortages, and the unprecedented peacetime implementation of wage and price controls. It was, according to one prominent economist, ‘the greatest failure of American macroeconomic policy in the postwar period.’”

In more personal terms, this time around, it will affect every single living American in a bad way.

You think people are angry now? Go back and look at the films, the art, and the literature of the 1970s. These were not happy people. And much of it had to do with inflation which hindered opportunity. It was like having a pandemic lockdown without bothering about a virus.

Because high inflation also brings about higher interest rates, and higher unemployment too. Those menial jobs people don’t want today? Those looked good in the 1970s.

The American dream will fall farther away from the reach of ordinary Americans than people born after 1980 can possibly imagine.

And the problem, the legacy economists will tell us on behalf of Congress, is that the government hasn’t spent enough of our own money.

It’s for our own good, they’ll say.