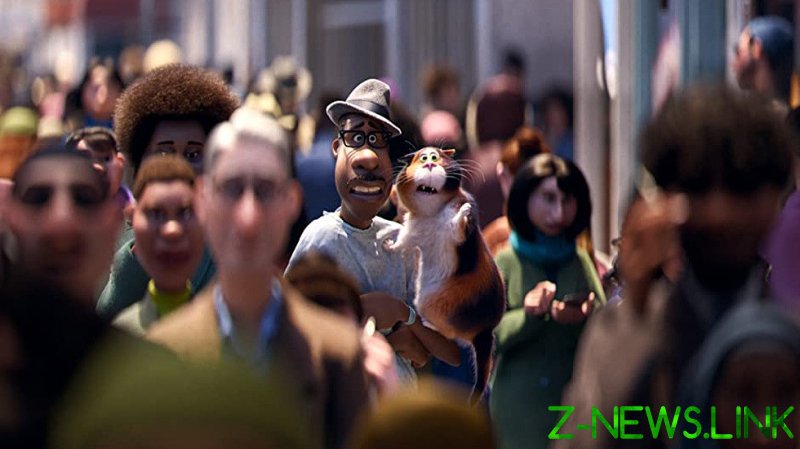 ‘Soul’, the new film from esteemed animation studio Pixar that premiered on the streaming service Disney+ on Christmas Day, has attracted a lot of attention for featuring the first black protagonist in the company’s history.

The film tells the story of Joe Gardner (Jamie Foxx), a good-hearted jazz musician (who happens to be black) making a living teaching music at a New York City middle school.

On the day Joe’s life is about to change following an audition with a famous saxophonist searching for a piano player, things end up taking an unanticipated twist.

In this era of aggressive wokeness and cancel culture, Pixar and Disney went to great lengths to make sure ‘Soul’ was not deemed racist and was acceptable to black people.

According to the New York Times, “Knowing their work would be minutely scrutinized, the director Pete Docter, the co-screenwriter Mike Jones and the producer Dana Murray, who are white, set out to create a character who would be believably Black while avoiding the stereotypes of the past.”

So, the question is how could these artists, who are members of a race (white) so despicable the New York Times refuses to capitalize it, believably create a character whose race (Black) is so superior that it is always capitalized in the same organ?

As the Times informs us, the first step in this Herculean task was Pixar’s vice president for inclusion strategies, Britta Wilson, building a ‘Cultural Trust’ made up of the company’s black employees.

The second step was that the production “talked to a lot of external consultants and black organizations...”

And, finally, it brought in black playwright Kemp Powers as a screenwriter. He then got promoted to co-director, becoming the first black director in Pixar history.

If you think all of that corporate pandering – from having a vice president of “inclusion strategies” and introducing a “Cultural Trust” to hiring a racial consultant – seems transparently ridiculous, repulsively shameless, and downright griftery, you are not alone. But, thankfully, the film somewhat succeeds despite – as opposed to because of – all of this human resources-inspired nonsense.

Ironically, the end result of all of Pixar’s gratuitous genuflecting to black people is a film that is strikingly color blind in a gloriously unwoke, old-fashioned, and beautifully rational Martin Luther King-esque kind of way, as Joe’s race is actually entirely incidental to the story in ‘Soul’.

To the film’s great credit, it doesn’t tell a black story – it tells a human story. ‘Soul’ transcends race and all of our other superficial differences, such as gender, and highlights the fact that we’re not ‘white’ people and ‘black’ people, but, rather, just people – all of us filled with hopes, fears, dreams, and heartbreaks.

The funny thing about Pixar being so scared of being called “racist” that it bent over backwards to make ‘Soul’ acceptable to black people, though, is that it wasn’t black people it needed to be worried about. It was the woke.

A case in point is Kirsten Acuna, a non-black film critic for the Insider, who was deeply disturbed by the movie’s racial politics – so much so, in fact, that the rather harmless film left her “cringing up until the very last minute.”

Acuna’s specific woke complaints contain too many spoilers to share in detail. But one of her non-spoiler issues was that “Pixar’s first Black-led film should celebrate a Black man’s experience and solely focus on his dreams and desires. Instead, Joe’s life takes a backseat in order for a white woman to figure out what she wanted from life.”

Contrary to Acuna’s complaint, there is actually no ‘white woman’ character in the movie at all. Even though the alleged offending character, ‘22’, is voiced by white actress Tina Fey, a major premise of the movie is that ‘22’ is a spiritual entity capable of taking any form.

Acuna was also dismayed that ‘Soul’ has a 97 percent critical score on Rotten Tomatoes, declaring that the majority of critics who have reviewed the movie are white, and “shouldn’t at least half of the reviews for Pixar’s first film with a Black lead come from critics of color?”

So, if we studiously apply Ms. Acuna’s race-based test for film critics, then the obvious question becomes: Why didn’t Ms. Acuna let a black critic write a review of Pixar’s first black-led film for Insider instead of writing one herself?

This is why wokeness is so insidious and why trying to appease it is a Sisyphean venture, because it is an inherently irrational, emotionally fueled exercise in grievance seeking and virtue signaling. Vacuous and vapid woke fools such as Kirsten Acuna lamenting a movie’s allegedly troublesome racial politics provide all the proof you need.

As for my opinion? Well, ‘Soul’ wasn’t as great as I’d hoped it would be, but it wasn’t bad. It’s an at times entertaining, thought-provoking, visually gorgeous and interesting movie.

My biggest issue with ‘Soul’ is that it isn’t quite as philosophically profound as it could have been, but, to my surprise and its credit, it also isn’t heavy-handed and politically preachy. For that I was very grateful, and you should be, too.