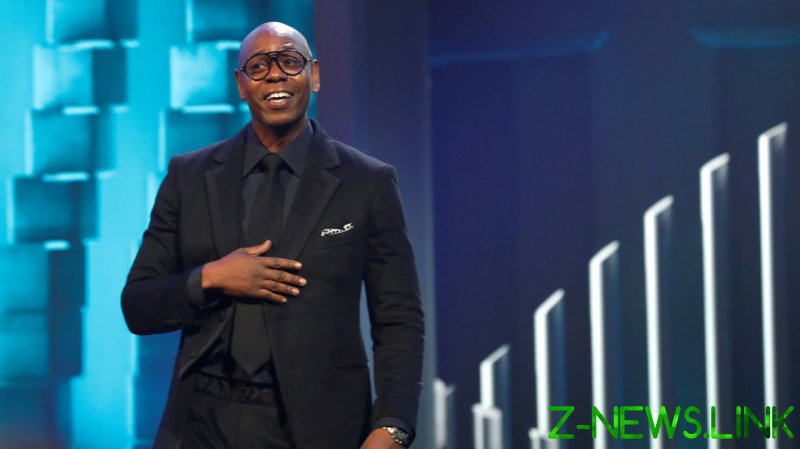 Dave Chappelle. Don’t you just love him? I mean, hate him? I mean, love to hate him…? Whatever. While debate still rages over whether the self-proclaimed “transphobic comedian” deserves to be persona non grata for making squillions of dollars out of telling jokes that some people may find offensive, Netflix has suspended a lowly trans employee who tweeted that Chappelle’s latest special, ‘The Closer’ was an “attack” that pitted “us [the trans community] against other marginalized groups.” Oh, dear.

Meanwhile, the 46-year-old joker, having already doubled down on his gags about LGBTQ people, trebled down on the ever-growing ‘translash’ against him, after receiving a fireworks entrance and a standing ovation at a screening of his untitled documentary at the Hollywood Bowl last Thursday. “If this is what being cancelled is like, I love it,” he yelled at the packed LA arena. Quit that, ‘Dear White People’ showrunner Jaclyn Moore!

While female academics, authors and MPs such as Kathleen Stock, J.K. Rowling and Rosie Duffield can be hung out to dry for suggesting that women – can we say women, Ed? – maybe, just maybe, I don’t know, have, er, cervixes and vaginas and sometimes have babies and stuff, male comedians, especially black male comedians, in recent decades have got a free pass when it comes to playing the court jester card.

Black gagsters know they can get away with the most treacherous, treasonous, tyrannical and yes, transphobic comedy on the planet, because they have an impenetrable humour shield behind which they can hide, a shield that screams, “I’m only joking, bitches!”

To his credit, like many black comedians, Chappelle uses this ‘privilege’ to tackle culture war hypocrisy, racism, sexual politics, and more racism (we like racism being tackled), which makes for an intriguing yet flawed routine. In some ways, his schtick comes across as part drunken TED Talk, part lurid best man’s speech, as he tries with so-so effect to flesh out and unpick the intersectional funny bone between the black experience and transgenderism.

However, despite the longueurs, the misfiring wit, and at times the ‘just-give-me-the-f**king-cheque’ laziness of his allegedly final Netflix outing, Chappelle is still the funniest act in town. To use a football analogy, the gap-toothed trickster is less the Pele of comedy (that has to be Richard Pryor) and more like that other Brazilian footballing genius (and gap-toothed trickster) Ronaldinho, who even on a sh***y day, like Chappelle, was twice as good as the next best player in the game.

Crucially, just as Ronaldinho was in his time, and the best African American stand-ups tend to be, Chappelle is ‘money’. Serious money. Along with contemporaries, Chris Rock, Kevin Hart and even Katt Williams, African American comedians have the sort of major pulling power, commercial clout, cultural influence and massive international fanbases that make broadcasters, exec producers and sponsors think thrice before pressing the ‘no platform’ button on them.

In fact, when you look back on the careers of legends such as Pryor and Eddie Murphy, and take into consideration Netflix’s output, which includes specials by edgy and controversial white comedians such as Bill Burr and Louis C.K., too, the global streaming service emerges as something of a “f**k you” champion of free speech, at least when it comes to comedy.

In Murphy’s 1983 stand-up special, ‘Delirious’, for instance, the now 60-year-old comedian delivers the kind of foul-mouthed, un-PC routine that would make Roy “Chubby” Brown blush. During one bit on the perils of being around gay men, Murphy jokes, “It petrifies me because girls be hanging out with them. One night they could be in the club having fun with their gay friend, give them a little kiss. And go home with AIDS on their lips!”

Admirably, Murphy gave us the mea culpa treatment as far back as 1996, when he admitted, “I deeply regret any pain all this has caused. Just like the rest of the world, I am more educated about AIDS in 1996 than I was in 1981.”

Pryor, who like Murphy is one of Netflix’s greatest comedy assets, also sought forgiveness for previous sins. In his autobiography, ‘Pryor Convictions’, Richie admitted that after visiting Kenya in 1979 he regretted “ever having uttered the word ‘n*****r’” on or off stage.

Nevertheless, ‘Richard Pryor: Live in Concert’ which was shot in 1979 before the comedian’s Damascene conversion, and is available to stream on Netflix, is not only littered with the N-word but is also a compendium of what many would consider, even in the ’70s, of racist gags and ‘inappropriate’ observations, such as, “See, they [Chinese people] ain’t like black people in China. See, they f**k quick and get it over with. Black people try to stay in the p***y three and four days, right.”

Given Netflix’s defiance over ‘Chappellegate’, the hours of white-knuckle content it hosts and the overwhelming popularity of Pryor, Murphy and Chappelle, one wonders, “Who does a black comedian have to f**k off to get cancelled around here?”

The answer to that is simply: the black diaspora. And the best way to feel the wrath of the global black community isn’t to diss gays, trans people, women or even Michael Jackson. No, it’s to commit the capital offence of being a “c**n” – that shucking and jiving buffoon who reinforces and perpetuates commonly held racial stereotypes about black people while taking both knees and sucking up to the man.

While the US has all but eradicated this sub-species of ‘minstrel’, the UK continues to lag behind with many a c**n still gracing our TV screens, radio airwaves and print media. Only last weekend, I nearly choked on my chitlins as I came across a fawning interview in The Times with Sir Lenny Henry, the only black British comedian to be knighted for services to racism.

While Uncle Lenny may be popular with the nation’s chicken-in-a-basket, end-of-the-pier, white bread gammonatti, few black people, save for close members of the Henry family themselves, would lay claim to appreciating his oeuvre, which includes being the first black performer to take part in ‘The Black and White Minstrel Show’, which aired on the BBC from 1958 to 1978. As my kids would say, “Wow. Just, wow.”

Many of my generation remain traumatised by Henry’s intra-racist performances on cringeworthy programmes, such as ‘Tiswas’ and ‘The Lenny Henry Show’. As if having to put up with pig-faced mediocrities from Bernard Manning to Jim Davidson wasn’t enough, black Brits had to contend with Uncle Lenny, whose ‘black on the outside, white on the inside’ vaudeville act defamed and debased the reputation of an entire community. Sorry Lenny, but “Katanga” my ass. Consider yourself cancelled.

Of course, you don’t have to be a professional jester to be a massive sell-out. But it helps. Take gamer, GB News shill and all-round right-wing Twitter grifter, Calvin Robinson. Labelled a ‘house negro’ by Marxist academic, Kehinde Andrews, Robinson, who as luck would have it shares a surname with a formerly un-PC brand of jam, has had to weather a storm of accusations of being a ‘race traitor’ from elements within Britain’s rather socialistic black community.

Robinson has crawled so far up Middle England’s rectal passage in search of a safe Tory seat that he’s in danger of being spat out by Prime Minister Boris Johnson over hors d’oeuvres at Number 10. As one prominent black politician recently told me, such obsequiousness is “an embarrassment” to the black community.

To be fair to Robinson, despite his Stepin Fetchit routine, which is largely based on accusing all and sundry of race-baiting, while, er, race-baiting all and sundry, calling him a ‘sell-out’ is disingenuous as this implies he was once part of the black community. He never has been. Nevertheless, Calvin, see that door over there marked ‘cancelled’? Make sure you close it on the way out, son.

While it’s easy to deride the likes of Henry and Robinson or Sammy Davis Jr. and Clarence Thomas as ‘jokonuts’, such a slur is undoubtedly a cheap shot. Nevertheless, it’s not a charge that’s levelled lightly or because of petty political differences. The problem with these clowns is not what they think but how they ‘act’, which is why you’ll only ever see white people, not black, queuing up to watch them perform.

I really don’t care whether you’re Team TERF, Team Chappelle or Team Can’t We All Just Get Along. Just don’t be Team C**n. For when you run out of shuffling tap moves, the footlights dim and the make-up starts to fade, the man will have moved onto the next genuflecting, self-hating Uncle or Aunty and the joke will be on you, not Netflix.