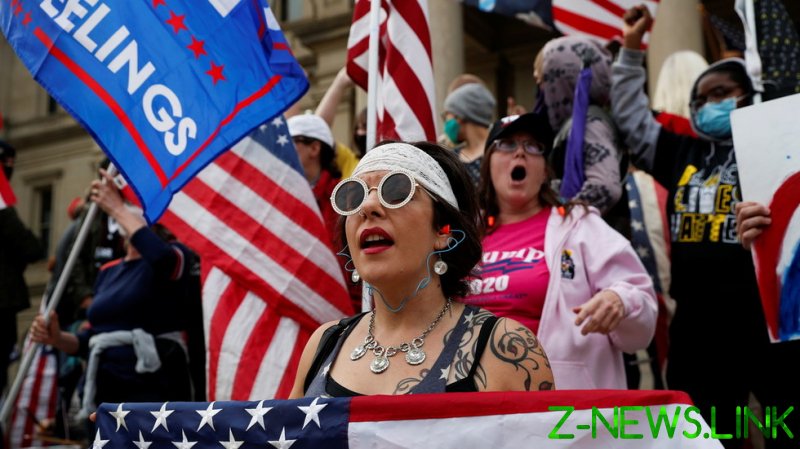 Though light on specifics, Joe Biden’s campaign message centered on unifying an increasingly polarized America, and on blaming Donald Trump for this polarization. After claiming victory on Saturday, Biden extended an olive branch, telling his opponents “We are not enemies. We are Americans.”

Shortly before, he declared that the US is now “A nation united, a nation strengthened,” and “a nation healed.”

Fox News’ Megyn Kelly was having none of it. “Written like a man who’s been in his basement for a year,” she snapped back.

Kelly then called on Biden to make good on his message of unity by reining in some of the more militant voices in his own party, like New York Congresswoman Alexandria Ocasio-Cortez, who recently proposed compiling lists of Trump aides and donors so that they could later be held accountable for their “complicity.”

Biden’s supporters raged at Kelly, calling her “pathetic,” and demanding she get in line with the apparent president-elect and encourage her audience to do the same. Another commenter compared her refusal to accept Biden’s message as an example of “white fear.”

“Half of the country has been demonized as awful for four years just for supporting their president who was falsely accused of Russian collaboration, wrongly impeached & attacked relentlessly” by the left, Kelly wrote. “And now it’s ‘let’s heal!’ ‘Unity!’ Good luck.”

“You’re out of touch if you think 70m Americans who have been unfairly demonized as the worst of humanity for 4yrs are now going to hug those who’ve viciously attacked them,” she told another critic.

Trump’s supposedly ‘racist’ and ‘sexist’ supporters were hounded by some on the left after Hillary Clinton’s shock loss in 2016. Clinton herself had a distaste for Trump’s voters, whom she infamously called a “basket of deplorables” during a campaign speech that year. Since 2016, some of the anti-Trump crowd have taken their hatred to shocking lengths, as seen when an ‘Antifa’ militant shot a Trump supporter dead in Portland, Oregon, this summer.

Even since Tuesday’s election, some in the media have hammered the 71 million Americans who voted for Trump as racists, with a host of liberal cable news pundits pinning the president’s strong showing on the “sexism and patriarchy,” “selfishness,” and “whiteness” of his voters.

Kelly isn’t the only right-winger unmoved by Biden’s platitudes. Nor was she the only conservative to see the irony of Biden’s supporters partying in the streets, after claiming that the coronavirus pandemic made it too dangerous to vote in person.

“Resist. Overturn. Boycott. Surveil. Leak. Impeach. And now they tell us it’s time to heal,” Fox News contributor Ari Fleischer tweeted. “Where were they for the last four years?”