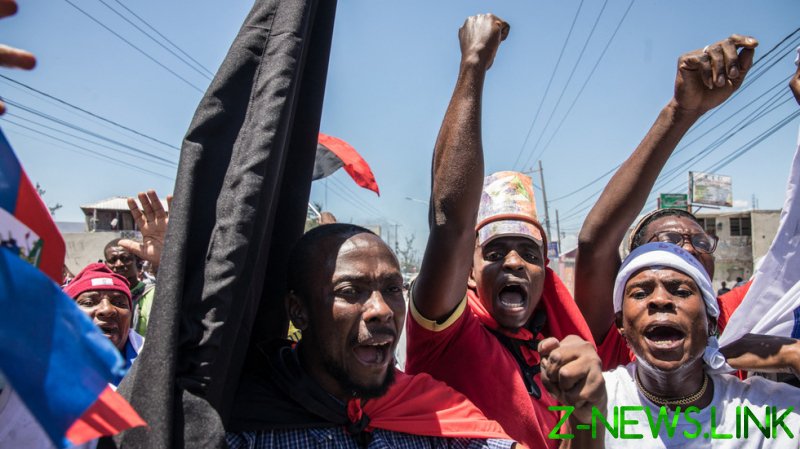 While the assassination of Haiti’s president Jovenel Moïse has again turned the world’s attention to the beleaguered Caribbean state, it’s also put the spotlight back on the region’s historic relationship with its former colonial rulers.

Whether the attack on Moïse last Wednesday at his home in the hills above Haiti’s capital, Port-au-Prince, was part of a genuine coup attempt is yet to be seen. But one thing is for sure: when it comes to Caribbean affairs, foreign and corporate political interference, money laundering and the seemingly unresolvable legacy of the transatlantic slave trade continue to cast a dark shadow over good governance and regional stability.

As the crow flies, my beachside ‘office’ on Barbados’s lush west coast is some 1,480 kilometres due south of Haiti, where Moïse was riddled with 12 bullets and his wife and childhood sweetheart, Martine, was left fighting for her life. But the two Caribbean islands are light years away from each other.

Both share a history of over 400 years of piracy, plundering and plantocracy; both eventually gained independence from their ‘colonial masters’ – Haiti via a violent revolution during the 18th century, which saw it become the western hemisphere’s first free Afrocentric republic and Barbados via diplomatic means in the 1960s as the last vestiges of the British empire finally crumbled. Both are part of a diaspora that’s still wrestling with a post-colonial world in which Eurocentrism and right-wing ideologies are at odds with resurgent Afrocentric identity politics. But while Haiti and Barbados have much in common, historically, ethnically and geographically, present fortunes and future prospects put them on very different sides of the world.

As someone who was British born, but the son of Guyanese immigrants who grew up under the yolk of British colonial rule, hearing the news of Moïse’s assassination had an odd resonance for me. My grandfather had been, in the 1960s end game of the UK’s rule over what was then British Guiana, the chancellor of the judiciary of my ancestral ‘homeland’. For a spell, he had held the same position in Barbados, too. As a contemporary of former Guyanese prime minister, Forbes Burnham, whose Afro-Guyanese-dominated People’s National Congress received ‘covert financial support’ from the US, my grandfather saw the CIA in 1964 agitate race riots in ‘BG’ in an attempt to stop Cheddi Jagan and his pro-communist Peoples’ Progressive Party from winning scheduled elections that year.

For decades, Guyana has ping-ponged politically on racial lines between the Afro-supporting PNC and the Indo-backed PPP. Today, with ExxonMobil’s drilling activities in Guyana’s territorial waters set to land the country with a $170 billion windfall over the coming decades, Guyana’s ethno-politics, widespread corruption and – as the Economist Intelligence Unit has called it “flawed democracy” – remains ripe for foreign exploitation.

Similarly, in 1970s Jamaica, the CIA was infamous for meddling in domestic politics, fomenting a long-standing beef between right-wing and left-wing elements in the country whose violent legacy remains to this day in the form of ‘Yardie’ organised crime groups on the island, in the US and UK. For decades, the CIA-backed Jamaican Labour Party and the old Soviet and Cuba supported People’s National Party fought for control of the island both at the ballot box and on the streets in running gun battles, particularly in the capital, Kingston.

Hearing the news of Moïse’s untimely demise, it doesn’t take a particularly wild imagination to think what may well be behind the attack, although the arrest of a doctor in Florida has helped thicken the plot.

Moïse was riddled with 12 bullets. Such firepower is unheard of in Barbados. Hardened criminals are mindful that in ‘Little England’ – as this former British colony of just under 300,000 is affectionately and condescendingly known (depending on your perspective) – gunplay draws unnecessary attention. Given the island’s 167 square miles of land (less than a third of the area of Greater London), you can run but you can’t hide for long.

Recently, a police officer was shot dead attending to a call and an AK-47 was recovered in another incident. But unlike in Haiti, a country of 11 million, which experienced 787 homicides in 2019, that same year Barbados had 49 homicides.

Moïse’s assassination was no run-of-the-mill murder or robbery-homicide gone wrong. Shell casings, multiple bullet holes and discarded ski masks at the scene instantly pointed to something more organised, and most likely politically motivated. By Thursday, a nationwide manhunt had morphed into a fierce gun battle close to the president’s residence in which four suspected ‘mercenaries’ were shot dead by Haitian security services with another two in custody.

Moïse’s assailants were said to have taken three Haitian police officers hostage before letting them go, while the ambassador to the US, Bocchit Edmond, claimed that 20 suspected mercenaries had been arrested.

Come Friday, my mobile was pinging with images and videos of the suspects – both dead and alive. In one video, two bound, bloodied and beaten men, possibly Hispanic, are seen being frogmarched through a large crowd by unarmed individuals. With the situation on the ground chaotic and rapidly evolving, acting prime minister, Claude Joseph, described Haiti as being “in shock” following Moïse’s assassination, with police chief Léon Charles urging residents to stay indoors for their own safety.

Bordering Latino Dominican Republic to the east, Haiti is one half of what’s historically called ‘Hispaniola’ – the second largest island in the Caribbean behind Cuba and a name that evokes images of the Spanish Main, swashbuckling privateers and relentless battles between the navies of Britain, France, Portugal, Spain and Holland as they land grabbed their way through the New World.

This violent land grab was of course largely driven by agricultural goods produced on the backs of slaves stolen from Africa and transported to the plantations of the Caribbean, a concept that all colonies rebelled against to a greater or lesser extent, and with varying degrees of success. The Maroons of Jamaica, for instance, had such success rebelling against the British that they signed a number of treaties with their former rulers in the 18th century, such were the negative effects on the plantocracy’s bottom line.

But it’s Haiti’s successful revolution by self-liberated slaves against French colonial rule between 1791 and 1804 – in what was then known as Saint-Domingue –that occupies Caribbean, and indeed revolutionary, folklore, but also demonstrates the often heavy price of freedom.

Led for much of the campaign by the ‘Father of Haiti’ general and military genius, Toussaint L’Ouverture, before overwhelming the French, free Haitians fought with American colonists against the British in the American War of Independence and even in the French revolution. They gained their own independence from France in 1801, becoming the only free black republic in the western hemisphere. But in 1825, Haiti was forced to pay reparations to the French slaveholders they’d overthrown or face the wrath of yet another French military invasion.

It took Haiti 122 years to pay off the slavery debt, leading to perpetual insolvency, which coupled with poor governance, political corruption, the brutal Papa Doc and Baby Doc Duvalier dictatorships from 1957 to 1986 and a series of catastrophic natural disasters, has made Haiti the basket case of the Caribbean rather than the self-governing beacon of democracy that L’Ouverture had once seen it as. Some have even gone so far as to suggest that Haiti has been cursed for its revolutionary zeal.

Crazed American media mogul, televangelist, political commentator and former Republican presidential candidate, Pat Robertson, once suggested that a “pact to the devil” had brought about the devastating earthquake in Haiti in 2010, a seismic disaster that resulted in the deaths of an estimated 100,000 people. Robertson blamed the tragedy on something that “happened a long time ago in Haiti, and people might not want to talk about it.”

Robertson had said that as Haiti had been “under the heel of the French. You know, Napoleon III and whatever,” they had “got together and swore a pact to the devil. They said, ‘We will serve you if you will get us free from the French.’ True story. And so, the devil said, ‘OK, it’s a deal.’” Robertson added, “You know, the Haitians revolted and got themselves free. But ever since, they have been cursed by one thing after the other.”

As insane as Robertson’s pulpit pulmonary may sound, there may be some secular truth to his mouth-foaming sermonising. Something akin to ‘bad karma’ has beset many former colonies in the Caribbean that decided to go it alone and cleave out a devilish path towards freedom rather than be in perpetual hock to the man.

As Barbados prepares to finally ditch the Queen as its head of state this November and remove the last symbol tying it to the Crown, British imperialism and Eurocentric hegemony, many at home and abroad wonder if this is such a wise move, given the fate that besets those who play politics in the region.

Grenada, Cuba and Trinidad have all had a taste of revolutionary politics in the modern era, with varying degrees of success and fallout. And as the situation continues to decline in Venezuela and the stuttering regime of Nicolas Madura continues to eye Guyana as a scapegoat for its woes, thanks to the former’s profligate management of its oil resources and the latter’s oil boom combined with a tetchy border dispute, I’ll raise a glass to the relative calm of Barbados and pray that peace comes to Haiti soon.