For the past day in the Donbas killed one fighter ATO 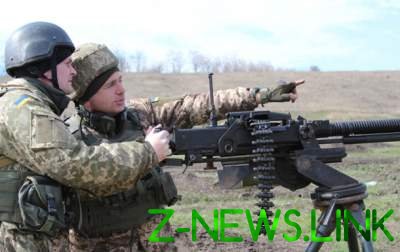 The separatists 16 times broke the truce in the Donbass.

For the last day units of the separatists in the Donbass 16 times fire on positions of AFU. One Ukrainian soldier was killed and two were injured, the press center of staff ATO.

“The last day in the ATO area distinguished by increased shelling of Ukrainian positions by Russian-occupation groups in Donetsk direction… Over the past day illegal armed groups 16 times broke the truce, to which the answer Armed forces of Ukraine 13 times used infantry weapons to defeat the enemy”, – stated in the message of the military.

See also:  In Greece in a mass brawl killed an American tourist

So, on the Donetsk direction the enemy twice and for several hours fired from infantry weapons strong points of the APU in the industrial area of Avdiivka. Ukrainian soldiers opened fire in response. During this confrontation, around 21.00 killed one soldier of the ATO forces.

Also at the end of the day under grenade fire appeared and civil houses of civilians in the vicinities of the Town. In the evening, the separatists of heavy machine guns beat in the area of opytne, Pisky and Zaitsev.

On the seaside direction, the separatists have fired more than 20 min caliber 82 mm at the residential sector of Water. After 18.00 by machine-gun fire were positions of the Ukrainian army near starognatovki and Shirokino.