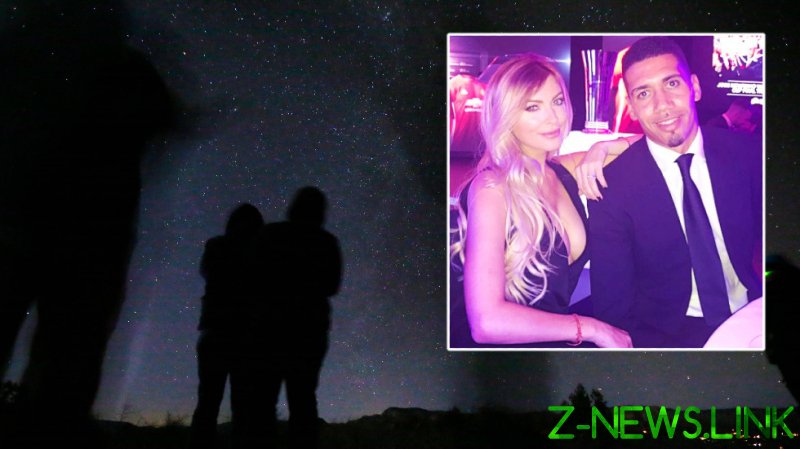 Covergirl Smalling, who is best known in the UK for her topless photoshoots in tabloid newspapers and lads’ magazines, voiced her amazement after the unidentified object flew down low past the pair before shooting back into the sky for at least an hour until they had to leave the scene.

The flabbergasted glamor pin-up insisted she had “nothing to gain from any of this” as she described the “massive and totally silent” anomaly in the night sky, saying it was “like two separate 3D rectangles rotating around each other with faint lights moving around the edges.”

“OK, so I promise we weren’t on magic mushrooms or anything, but me and [Smalling] saw the craziest UFO last night,” the mother-of-one told her Instagram following of more than 39,000.

“For the record, it was 100 billion percent not a drone. It was massive and very sophisticated with faint lights all around the edge.

“It was also an odd shape, not like that of a drone. Crazy, I know. It also wasn’t a plane or anything like that. It was silent. Even drones are loud.”

Repeating some of her descriptions while accepting that some of her audience would “likely think I’m mad”, the 35-year-old appeared to contradict her assessment of the object as being large.

“It was too small to get on film when it stayed stationed in the sky, although Chris could see it rotating with lights flashing around it,” she said.

“I could only see the outer lights at this point as my eyes aren’t as good. Anyone seen anything similar? It’s hard to explain as it was well camouflaged.”

Some fans couldn’t resist the chance to poke fun at her husband, who joined Serie A side Roma from Manchester United last year for a fee that could rise to more than $24 million.

“It’s a ball Smalling was trying to pass,” wrote one, while another claimed it was one of former United teammate Fred’s mishit free kicks.

“Jose will do that to you,” wrote one joker.“It’s Jose parking up his space ship”.

These remarks were references to Smalling’s former manager, Jose Mourinho, who he will be reunited with when the recently-axed Spurs supremo takes over at the Stadio Olimpico imminently, having shipped Smalling out of Old Trafford during his time as United boss.

Before losing 6-2 to United in the Europa League semifinals last season, Smalling and his family hit the headlines when their house was robbed in April.

Luxury watches and jewelry were stolen as the celebrity vegan was forced to hand items over to three armed men in the early hours of the morning before the thieves fled the property.

“Although still a bit shaken, my family are all OK,” wrote his wife afterwards. “My husband handled the situation very well.

A post shared by The Worlds Top Models (@the_worlds_top_models)

“I’d just like to suggest that those living their lives like these thieves, who came into our bedroom at 4am pointing guns at our heads, rethink their choices in life and live in a more respectable and conscious way like real men, not rats – disrespectful to rats, I know.

“I suspect your life hasn’t been easy but there’s always another way. A way that will lead to blessings and not karma biting you on the ass, which I’ve no doubt it will.

“And for the record, anyone thinking of coming near me and my family again, we have no jewelry or watches left and don’t intend to buy anymore.

“If you see us wearing anything, it’s likely fake. So don’t bother.”