Home / Video news / Football referee during a match, repeated the trick from the Matrix. Video

Football referee during a match, repeated the trick from the Matrix. Video 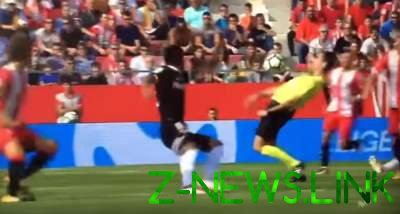 In the ninth minute of the game de Burgos was on the path of the ball.

Football referee Ricardo de Burgos demonstrated the wonders of the reaction during the match of the fifth round of the championship of Spain between Girona and Sevilla, which ended with a minimal win (0:1).

During the meeting, the referee played something similar to the famous trick from the movie “the Matrix”.

In the ninth minute of the game de Burgos was on the flight path of the ball when passing one of the players, “Seville”. The ball flew to the referee right in the face, but he kept his head, sharp movement did tilt back, while he stood his ground and, thus, managed to avoid a painful blow.