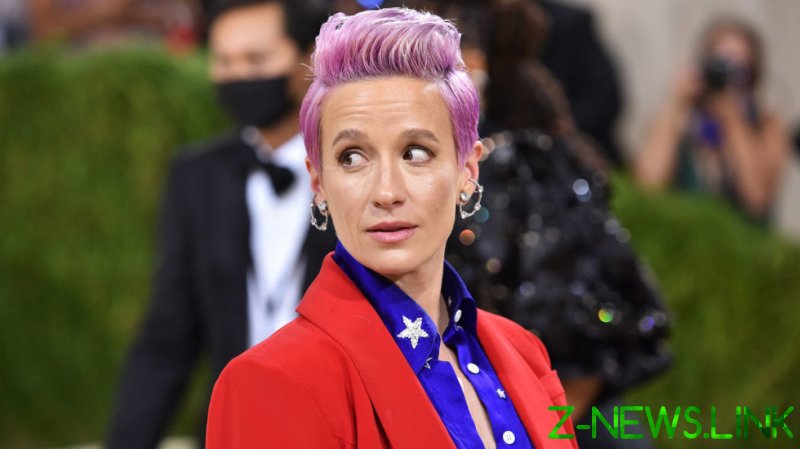 Social justice warrior Megan Rapinoe has used her huge public profile to highlight calls to white people to “out-organize” the right and a BLM bosses’ description of the US Capitol rioters as “nationalist insurrectionists”.

Former Ballon d’Or Feminin winner Rapinoe responded after the US marked the anniversary of the mass assault on the US Capitol, when five people died and 15 police officers were hospitalized in the aftermath of the last US election.

The US Women’s National Team captain shared a variety of impassioned messages a year after supporters of outgoing president Donald Trump stormed the US congress headquarters in Washington.

The first message, from hugely-followed human rights lawyer Qasim Rashid, spoke of white people in US history who were slave owners and abolitionists of slavery.

“Parents who think teaching about America’s history of racism shames white kids should reflect on why they think white kids will associate more with slave owner guilt than with abolitionist pride,” wrote the author, whose debut book was called ‘The Wrong Kind of Muslim’.

Rapinoe then turned her attention to Alicia Garza, an activist who is the co-founder of the Black Lives Matter movement which has swept the world.

“One year later, we remember that the United States is powered by amnesia,” Garza said.

“Black people have spent more time in jail for [crimes related to] weed than have the white nationalist insurrectionists who tried to overthrow the government.”

Speaking on the anniversary, US president Joe Biden claimed Trump had spread lies because he “values power over principle”, alleging that “democracy was attacked” because his Republican predecessor could not accept that he had lost the election to the Democratic Party.

To mark the occasion, Showing Up for Racial Justice, a US network campaigning for racial and economic justice, issued a message to white people that Rapinoe appeared to endorse.

“Our work is finding our people and giving them a better offer than white supremacy,” the group urged.

“As white progressives, we need to commit to out-organizing the right in our communities.

“Imagine if millions of white people rejected white supremacy and instead joined in multi-racial coalitions across the country. What could we accomplish together?”

OL Reign winger Rapinoe has clashed with Trump and repeatedly spoken out on similar themes.

That has made the 36-year-old a divisive figure, and she is hugely popular on Instagram, where some of her following of more than 2.2 million saw her final post on the anniversary flagged up by fact-checkers as ‘missing context’.

That was a message from former National Association of Black Journalists award-winner Jemele Hill which appeared to claim that there was a much more robust police response to a Black Lives Matter protest than to the Capitol riots.

“Black people would have been arrested for simply having the thought of storming the Capitol,” said Hill.

“Despite what’s historically been done to black people in this country for hundreds of years, retaliation has never been our plan. Only freedom and equality.

“It says everything about America that the pursuit of dignity, respect, and tolerance is met with brute force, but a coup that seeks to uphold white supremacy is not and there has been no consequences for the lawmakers who participated in the insurrection.

“Who America wants to be and who it has been are two different countries.”