Footage with commentaries of the former fiance of the murdered human rights activist. Video 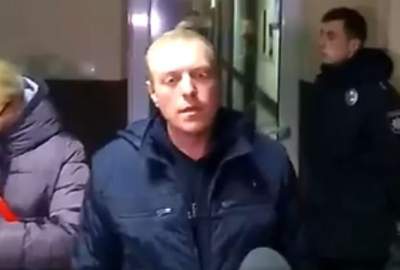 With Sergeyev spoke as a witness.

In the Internet appeared the video with the comments of the former fiance of the murdered human rights activist Irina Mostovskoy, who was summoned to the police for “talks”

According to Vitaly Sergeev, about any suspicions he had not reported and interviewed only as a witness.

At the same time he decided to use article 63 of the Constitution, which allows not to testify against themselves, and refrained from answering a number of questions of the investigation.

See also:  There were shots of a massive fire at the warehouses in Kiev. Video

“I her last seen in August near the Independence square. She was very focused on their court cases, she has two of them had, what she called the main” – said Sergeyev.

Recall Moskovskoy body was found in the river village Demidov, Vyshgorodskiy district, Kyiv region. Upon a premeditated murder the criminal proceedings are opened.

See also:  A unique case: the fighters of the sappers removed the grenade. Video

The lawyer conducted the case of the death of her sister, who in September 2015, the death has hit by Dmitry rossoshansky – nephew of the district judge, who at the time of the accident was in a condition of narcotic intoxication.