Home / Video news / Footage of the consequences of the night of the disaster in Lviv region. Video

Footage of the consequences of the night of the disaster in Lviv region. Video 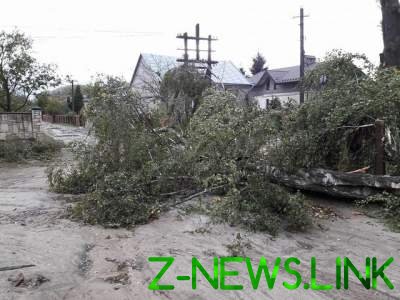 The wind snapped trees like matchsticks and swept from the bride’s wedding dress.

As a result of complications of weather conditions on the territory of Lviv region, which was accompanied by the West wind gusts up to 25 m / s, the rescuers already managed to make 26 trips for disaster relief.

As of the morning of October 6, in the region left without electricity in 292 settlements (183 fully, partially 109). Most of the outages in Buzka, Zhovkva and Pustomytovskiy area.

Night in the village Zymna Water on the street Lysenko old big fir tree fell on the roof of the house and dragged, according to witnesses, approximately six electrical poles.

Today around six in the morning in the district center Kamenka-Bugskaya on the street of the Heavenly Hundred Heroes tree fell into the roadway and prevented to leave the call an ambulance.

And in the village Vidniv of the Zhovkva district, a tree fell on a gas pipe, causing the pipe was damaged. Rescuers IPC POS Kulikov carried out work to cut wood.

As for funny situations, that in Lviv on the streets of Masaryk passers-by, after a windy night, found on the ground white wedding dress and now looking for her owner. In all likelihood, the wind tore the bride’s attire from the balcony. This is reported by users of Facebook.