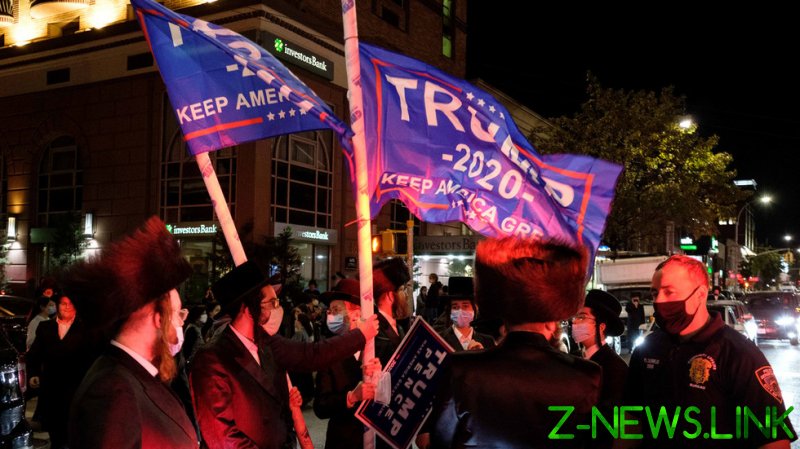 Cuomo tore into the president during a call with reporters on Friday in which he defended the zoned economic shutdown orders imposed in several Covid-19 “hotspots” across the state earlier this week. Trump, Cuomo said, was a “divisive force” trying to “inflame divisions” among New Yorkers – especially Orthodox Jews.

Trump’s “campaign is fomenting the ultra-orthodox in Brooklyn,” Cuomo declared. Insisting the alleged link between Trump and the unrest in Brooklyn was not mere “wild speculation by the governor,” he played what he described as a robocall that went out to hundreds of residents of Borough Park – a heavily Orthodox neighborhood – calling for residents to take to the streets with signs denouncing Cuomo.

“The more signs we have the bigger the national outcry will be tonight on 13th Avenue, or wherever else Heshy Tischler goes,” the ‘caller’ says, referring to the neighborhood radio personality that has been at the forefront of local resistance to Covid-19 restrictions for months. “Hold big signs – ‘Cuomo killed thousands’ – as many as possible, as big as possible.”

“Some of those people will die,” he added ominously, before pointing his finger at the president again. “What’s the Trump campaign saying? Play politics.”

However, the Trump campaign and Tischler both denied involvement in the call, which turned out to be a “prank” played by a 24-year-old neighborhood man “messing around with friends” on WhatsApp. The bewildered young man told a local journalist it was just a joke, insisting “I hate politics.”

While the call may have been fake, the rage against the governor’s shutdown is very real. Cuomo on Tuesday slapped a broad swathe of south Brooklyn, two areas of Queens, and two upstate regions with strict orders to close schools and non-essential businesses and restrict churches and synagogues to fewer than 10 worshipers. All affected areas have large Orthodox populations, and the close-knit community has accused the governor of targeting them specifically. Orthodox Jews in Borough Park have flooded the streets several nights this week to protest the orders, burning masks and even beating up one of their own whom Tischler – the apparent ringleader of the resistance – denounced as a “rat.”

Other religious groups have taken their resistance to the courts. Several chapters of the Orthodox Jewish advocacy group Agudath Israel, plus three of its rabbis and another official, filed a lawsuit against Cuomo on Thursday demanding an immediate halt to his order restricting synagogue operation. The executive order “singles out and discriminates against all houses of worship – and synagogues in particular – by imposing occupancy and gathering restricts that make it impossible for Orthodox Jews to comply with both their religious obligations and [Cuomo’s] Order,” the suit claims, adding that the governor had explicitly threatened to “take action” if the “orthodox community” does not obey. Adding insult to injury, the shutdown was announced just 48 hours before three Jewish holidays, “trampl[ing] on their constitutional right to the Free Exercise of Religion.”

The Roman Catholic Diocese of Brooklyn followed with its own lawsuit hours later, declaring the governor’s order “arbitrarily reduces capacity” at Catholic churches that have had nothing to do with the uptick in case rates in the shutdown zones. To punish Catholic churches for no reason “impedes our right to worship and cannot stand,” Bishop Nicholas DiMarzio of Brooklyn said in a statement, calling it “an insult to once again penalize all those who have made the safe return to Church work.”

Catholic and Jewish leaders also came together in June, winning a preliminary injunction that forbid the state to restrict outdoor gatherings as long as participants engaged in social distancing. Houses of worship were also given the green light to open at 50 percent capacity, up from 33 percent.