Home / WORLD / Florida’s Ron DeSantis, the Republican governor whom Democrats love to hate, now is triggering leftists with the way he eats pizza

Florida’s Ron DeSantis, the Republican governor whom Democrats love to hate, now is triggering leftists with the way he eats pizza 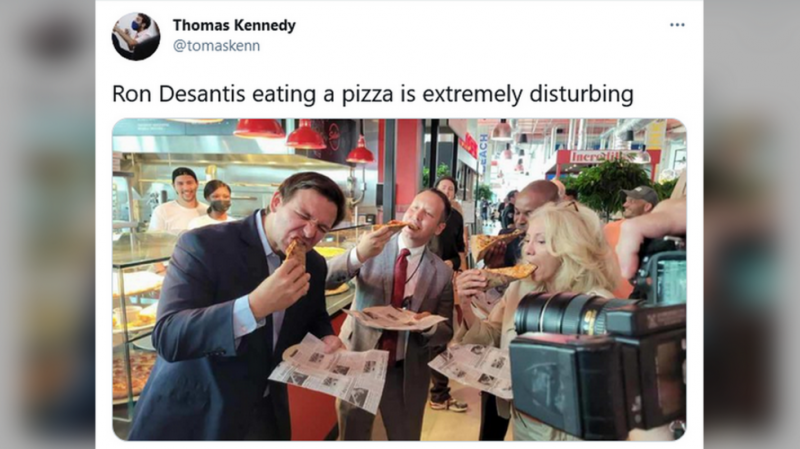 DeSantis, who has increasingly become one of the Republicans whom Democrats love to hate most as a rising star in 2024 presidential polls, proved his knack for ruffling feathers this time during a visit to a new market in Delray Beach on Saturday. The governor chomped aggressively on a piece of pizza, with crust side up, his eyes closed and nose scrunched in a moment of apparent eating ecstasy.

“Ron DeSantis eating a pizza is extremely disturbing,” Florida Democrat activist Thomas Kennedy said on Twitter. The same activist was so riled up against DeSantis during a Covid-19 press briefing last July that he heckled the governor and had to be forcibly removed.

Kennedy’s tweet was ratioed as conservatives mocked his criticism of DeSantis’ eating style, but he found some like minds. Some of the critics broadened the attack to the whole state of Florida. “He’s from Florida,” writer Michael Pacholek said on Twitter. “What does he know about pizza, or about food in general?”

Another observer saw the scene as menacing. “I’ve never seen someone hate-eat a pizza, but here we are, I guess.” But conservative commentator Lauren Chen saw virtue in the same image, saying, “You can see it in his face that he tastes the freedom.”

Others mocked Kennedy for being so troubled by someone eating pizza and lamented the current level of US political discourse. “In 2021, even eating a slice of pizza with your family is somehow offensive,” meme creator Charles Khan said.

It was largely DeSantis’ handling of the Covid-19 pandemic that made him a GOP star – and a target of Democrat critics. He not only reopened Florida’s economy more quickly than advised by the likes of Dr. Anthony Fauci, but also banned local governments in Florida from enforcing mask mandates.

Earlier this month, he became the first governor to sign an executive order banning businesses and government entities from requiring so-called vaccine passports to access goods, services or activities. The “60 Minutes” news program then aired a deceptively edited Covid-19 hit piece on DeSantis, only to be mocked for producing “fake news.” The New York Times speculated this month on whether DeSantis will become former President Donald Trump’s “GOP heir.”